Germany to speed up repatriations as migrants near million mark 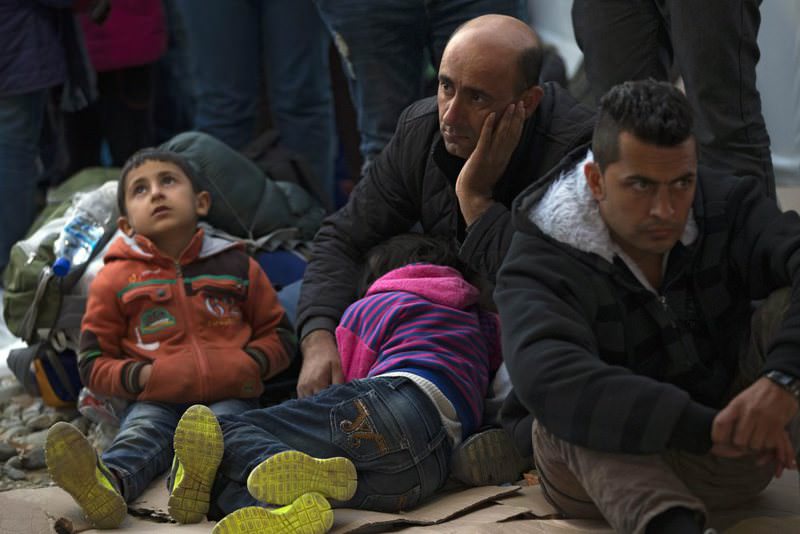 Migrants wait for permission to leave the registration camp and board the train heading to the Serbian border, near the city of Gevgelija, The Former Yugoslav Republic of Macedonia.
by Daily Sabah with AFP
Nov 07, 2015 12:00 am

After weeks of infighting, Germany agreed to speed up the repatriation of rejected asylum seekers after several rights groups and officials said new figures are reaching close to 1 million

Germany said Thursday it would speed up the repatriation of rejected asylum seekers, as new figures showed the country inching closer to the million-migrant mark and EU forecasts showed that even more people will try to seek refuge in Europe next year.

After weeks of infighting in Germany's ruling coalition over how to absorb record numbers of migrants, Chancellor Angela Merkel and the leaders of two allied parties agreed that those deemed economic migrants – from countries not at war – would be sent home within three weeks. The coalition leaders also agreed to set up three to five reception centers for asylum seekers deemed on arrival to have little chance of being allowed to stay – a move aimed at making it easier to repatriate those denied refugee status. "We took a good and important step forward," said Merkel, who has faced growing criticism over her open-door refugee policy. The agreement between the ruling Christian Democratic Union of Germany (CDU) and the Christian Social Union in Bavaria (CSU) alliance and junior coalition partner, the Social Democrats, came as the European Commission (EC) said it expected the number of people fleeing war and poverty to Europe to reach three million by 2017. From an estimated 1 million this year the, the EC predicted the numbers would soar to 1.5 million in 2016 before falling back to half a million in 2017 as stormier seas at the onset of winter have failed to stem the trans-Mediterranean migrant deluge.

The U.N. refugee agency (UNHCR) said Thursday it expected up to 600,000 additional migrants to cross by boat from Turkey to Greece over the next four months. Two more children, a young girl and a 6-year-old boy, died in the quest for a new life Thursday, adding to the grim toll of around 3,400 deaths in Mediterranean migrant shipwrecks this year, many of them minors.

The children died after the boat in which they were traveling sank off the Greek island of Kos. On a visit to the nearby island of Lesbos, where a sailors' strike has prevented thousands of arriving migrants to continue their journey to the Greek mainland, Prime Minister Alexis Tsipras called the migrant deaths "a crime … which must be stopped." Tsipras, who is to visit Turkey later this month for talks on the refugee issue, said registration facilities should be set up on the Turkish coast "so that no one has to risk losing their life in the cold waters of the Aegean."

The vast majority of the people fleeing war and poverty across the Mediterranean have their sights set on Germany, which registered more than 758,000 asylum seekers from January to October, mostly from Syria, Iraq and Afghanistan, the German Ministry of the Interior said Thursday. Berlin has already taken a firmer line against asylum seekers from so-called safe origin Balkans states, leading to a sharp drop in October of arrivals from countries such as Albania and Kosovo. In its first assessment of the economic effect of Europe's biggest migration crisis since World War II, the EC said the influx, far from being a drain on economies as some Europeans fear, could boost gross domestic product (GDP) by 0.2 percent to 0.3 percent.

The German government also sought to allay fears about the economic cost of its pro-refugee policies, assuring it could balance its 2016 budget despite spending billions more this year on migrant care. Other European states foresee difficulty, however. Sweden, which has received more asylum seekers per capita than any other EU country, this week appealed to other countries to help share its load. The request earned a swift rebuttal from neighboring Denmark.

"Each country has chosen [its] policy on refugees," Denmark's foreign minister, Kristian Jensen, told Ritzau news agency. "They have chosen theirs, and they must now handle it whichever way they want." The sailors' strike on Lesbos has trapped more than 22,000 people on the island, state agency ANA said. "We have been hungry for three days. I have three children. My children are sick," a migrant told Tsipras at one of the island's registration centers.

Tsipras, who was accompanied by European Parliament President Martin Schulz, was also approached by an 8-year-old Syrian boy named Mohamedeen asking for money, ANA said. While the spotlight has been mainly on the migrant route through Turkey and Greece lately, packed boats continue to set sail each week to Europe from restive Libya. Nearly 1,000 migrants were rescued Thursday from a handful of rubber rafts as well as a small fishing boat found adrift off the coast of Libya, another staging post for migrant crossings, the Italian coast guard said.

The turmoil in the Middle East and the five year-long civil war in Syria have led many people to flee conflicts in an attempt to seek security and shelter in more prosperous and peaceful countries, such as those in the EU. However, the EU has been criticized for lacking a collaborative response to the crisis. The UNHCR has called on European countries to do more to share the burden of the international community in the refugee crisis.