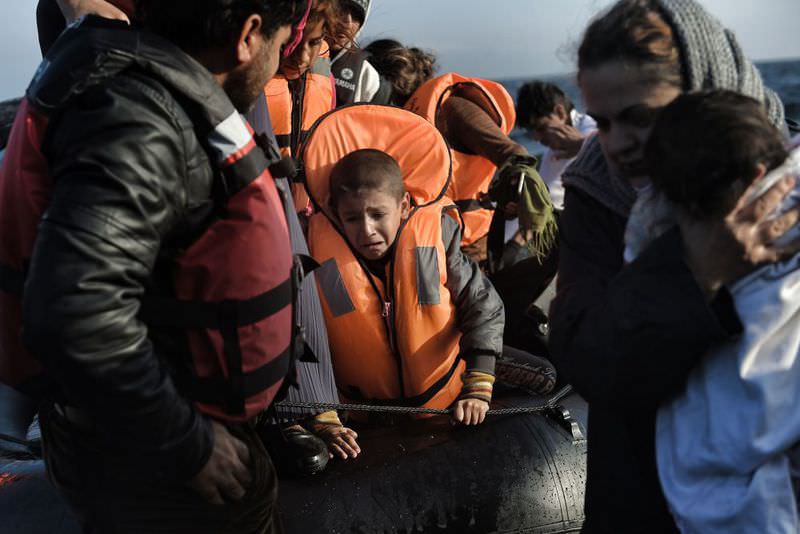 Refugees arrive on the Greek island of Lesbos after crossing the Aegean Sea from Turkey.
by Daily Sabah with AFP
Nov 09, 2015 12:00 am

The EU is now turning to African leaders to help tackle the refugee crisis at a summit this week. The EU is expected to call on African countries to take back more people classed as economic migrants, and in return it will offer billions of euros in aid

EU leaders will push their wary African counterparts to help tackle the migration crisis at a summit in Malta this week, offering them billions of euros in aid in exchange for cooperation.

Having recently pressed Turkey to stem the flow of Syrian refugees, Europe is turning its attention to the other main source of an unprecedented number of people fleeing across the Mediterranean.

The gathering of more than 50 leaders from both continents on Tuesday and Wednesday will see an overwhelmed Europe call on Africa to take back more people classed as economic migrants and not refugees from war. In return, Europe will offer development funds in a fresh thrust by the wealthy EU to tackle the wars and poverty in Africa that are the root cause of nearly a quarter of the nearly 800,00 migrant arrivals in Europe this year. "It's a new impetus we want to give," a European diplomat told AFP.

The summit was first called months ago when the Mediterranean route from a lawless Libya was still the main springboard for migrants travelling to the EU in battered fishing boats and flimsy dinghies. Since then the journey from Turkey over the hazardous Aegean Sea to the Greek islands, and then up through the Western Balkans, has become the principal route, but the EU wants to keep a focus on Africa.

Eritreans make up the bulk of nearly 140,000 migrants who arrived in Italy from Africa by sea in 2015, along with 18,000 Nigerians and 8,000 Sudanese, according to International Organization for Migration figures. "Despite the current focus on Syria, the Valletta summit is very important for European capitals, because it is aimed at tackling a long-term problem," the diplomat said. He acknowledged the concerns of senior African officials like Khadim Diop, Senegal's minister for African integration. "We cannot tolerate double standards," Diop said, adding Europe admits people from the Middle East and central Asia as refugees while turning away Africans as economic migrants.

Invited to the meeting are leaders from more than 30 African countries, including Libya as well as Eritrea, Ethiopia, Somalia, South Sudan and Sudan, the sources of many people fleeing conflict and repression. Also due to attend are the leaders of Chad, Cameroon, Niger, and Nigeria in the drought-stricken Lake Chad basin, where 2.5 million people have been displaced by abject poverty and the Boko Haram extremists.

The 28 EU leaders will hold a second, separate summit immediately after the EU-Africa meeting on Wednesday. The African nations will be asked to approve an action plan aimed at tackling the root causes of mass migration, according to a draft obtained by AFP. It calls for stepping up diplomatic efforts to ease or resolve conflicts, such as those in Libya and the regions of Sahel, Lake Chad and the Horn of Africa. The plan also aims to boost economic and agricultural development.

The European Commission is also expected to announce a 1.8 billion-euro fund for Africa to underpin the plan, but member states have been slow to match that amount. "How can we engage in a serious and responsible dialogue with our African cousins if we ourselves are unable to fulfil the promises we have made them," Commission President Jean-Claude Junker said last month.

The plan involves Europe sending many economic migrants back home while opening legal channels for a limited number of others to enter the EU, where joblessness has fueled a growing popular backlash against migrants. African countries are reluctant to take back nationals to avoid losing billions of euros in remittances, which exceed the value of development aid, a European diplomat said. The leaders are also asked to crack down on ruthless migrant smugglers with the help of international police agency Interpol.

According to the International Organization for Migration (IOM), nearly 780,000 people have made the perilous journey across the Mediterranean this year so far and more than 3,400 have died or gone missing trying to reach Europe. The majority of migrants come from the Middle East and Africa.

The turmoil in the Middle East and the five-year war in Syria have led many people to flee the conflict in an attempt to seek security and shelter in a more prosperous and peaceful country, such as one in Europe. However, Europe has been slammed for lacking a collaborative response to the crisis. The U.N. refugee agency encouraged European countries to do more to share the burden of the international community in the refugee crisis.