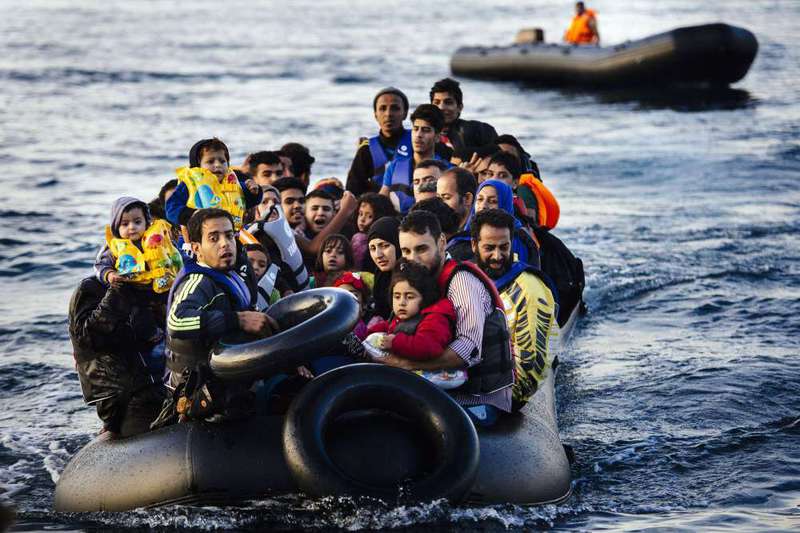 As EU leaders met with their African counterparts in a bid to tackle the current refugee crisis, Slovenia decided to begin erecting a razor-wire fence along its border with Croatia, which is opposed by many bureaucrats in Brussels, as they argue it undermines efforts for a joint solution

European leaders Wednesday focused on joint action with Africa to tackle the migration crisis, as Slovenia became the latest EU member to act on its own by barricading its border.

EU leaders plan to offer their African counterparts up to 3.6 billion euros in aid, at a summit in Malta yesterday, in exchange for help tackling the migration crisis rocking Europe. The rare gathering of around 50 leaders from the two continents is the newest prong in the European Union's quest for a joint strategy to deal with the biggest flow of refugees and migrants since World War II.

But, Slovenia's move again underlined the divisions within the bloc over how to respond to the crisis. The Balkan state's army began on Wednesday rolling out razor wire along the border with Croatia. After Hungary sealed its borders last month, Slovenia found itself on the main Balkans route for the thousands of migrants who are landing in Greece every day after braving the short but dangerous sea crossing from Turkey.

Bureaucrats in Brussels, who pushed for the summit in Malta, oppose fences because they argue they simply redirect the flow of migrants and undermine efforts for a joint solution. The EU is offering up to 3.6 billion euros to persuade African leaders to take back more economic migrants, a step many African countries are reluctant to take for fear of losing the billions of dollars in remittances sent home by people working abroad. European nations aim to boost cooperation with African countries to protect refugees, send home irregular migrants and stop those who smuggle them, while offering Africans expanded legal channels of migration. "This summit is about action," European Council President Donald Tusk told summit hosts in Malta late Tuesday.

African Union chief Nkosazana Dlamini-Zuma "will speak on the way Africa and Europe can partner and work collaboratively to reap the benefits of labor migration, as well as on ways to overcome the challenges around irregular migration in the immediate, medium and long terms," according to an EU statement. As a carrot, the European Commission, the 28-nation EU's executive arm, is setting up a 1.8-billion-euro "trust fund" for Africa and has urged member states to match that sum - although European sources said it was not sure that they would.

The money would go towards tackling the root causes of migration such as poverty and conflict. "This new fund will help us to work together to offer the people of Africa a better future at a time when young Africans often have a choice between unemployment or radicalization," Tusk added. Progress on the main thrust of the EU's current migrant strategy - fostering cooperation with Turkey - will be discussed when EU leaders meet without the Africans today in Valetta.

The EU-Africa summit was first called months ago when the Mediterranean route from a lawless Libya was still the main springboard for migrants traveling to the EU in battered fishing boats and flimsy dinghies. Nearly 800 migrants died in a single shipwreck off the Libyan coast in April.

Amnesty International's Iverna McGowan raised fears that the summit would reinforce the idea of a "Fortress Europe," telling AFP the approach "can lead to an outsourcing of human rights abuses and is quite worrying." Invited to the meeting are leaders from more than 30 African countries, including Libya as well as Eritrea, Ethiopia, Somalia, South Sudan and Sudan, the sources of many people fleeing conflict and repression.

Africa accounts for just under a quarter of the nearly 800,000 migrants who have reached Europe this year.

The majority of migrants come from the Middle East and Africa. The turmoil in the Middle East and the five-year war in Syria have led many people to flee the conflict in an attempt to seek security and shelter in a more prosperous and peaceful country, such as one in Europe. However, Europe has been slammed for lacking a collaborative response to the crisis.