Turkey’s border to be ISIS-free, US Secretary of State Kerry says 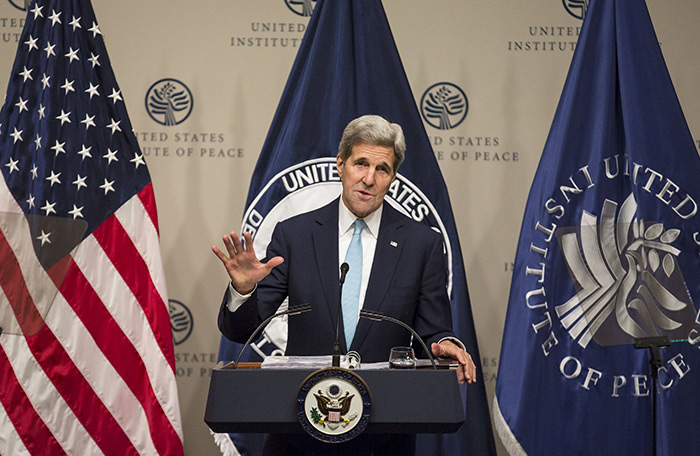 US Sec. of State John Kerry delivers remarks on the ,U.S. strategy in Syria, during a speech at the United States Institute of Peace in Washington November 12, 2015. (Reuters Photo)
by Mehmet Çelik
Nov 13, 2015 12:00 am
United States Secretary of State John Kerry has commented on Thursday on the fight against ISIS and the strategy of the U.S.-led coalition air strikes in Syria during his speech at the U.S. Institute of Peace in Washington.

"Not long ago, Daesh [ISIS] controlled more than half of Syria's 500 mile-long border with Turkey. Today, it has a grip on only about 15 percent, and we have a plan with our partners to pry open and secure the rest. And we will," Kerry said.

Highlighting the U.S. support to the moderate Syrian opposition, "We are striving with local forces to put the squeeze on al-Raqqa, the center of Daesh's operations. We have hit some of the organization's key energy facilities, including just recently the Omar oil field, from which the terrorists derive both revenue and fuel. And we have made Daesh change the way it moves and operates, because its leaders now get up each morning worrying about what might come down from the sky," he added.

Secretary of State Kerry also added that the fight against ISIS will continue and a proactive strategy will be followed.

"All of this and more is part of a strategy to continue building on what has worked and to apply pressure against Daesh from as many directions as possible, with as much intensity as possible, for as long as it takes," Kerry said.

Criticizing the European allies of the U.S. Kerry said that a more intensified support by the European states will add to efforts in the fight against ISIS.

"We are encouraging our European allies to do more – and they are. We are increasing our operational tempo out of the Incirlik Air Base in Turkey, flying more often and to greater effect," he added.
Last Update: Nov 13, 2015 4:56 pm