US should only accept ‘Christian’ refugees from Syria: Jeb Bush 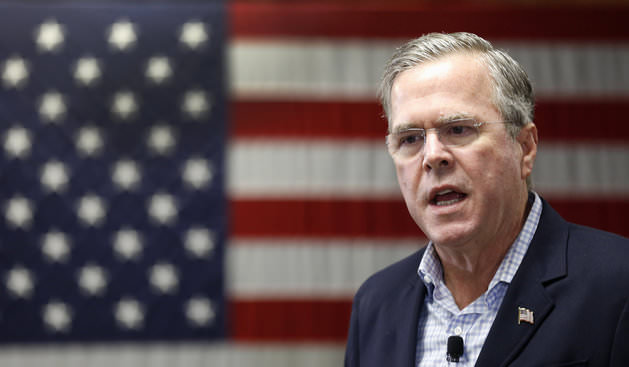 Republican presidential candidate Jeb Bush speaks during a campaign stop at the VFW, Nov. 13, 2015, in Franklin. (AP Photo)
by daily sabah
Nov 15, 2015 12:00 am
As one of the perpetrator's in Friday's terrorist attacks in Paris was confirmed to be a Syrian refugee late Sunday, a top U.S. Rebublican candidate has called for a shift of focus in U.S. planned assistance to Syrian refugees, by favoring Christians over the others.

Jeb Bush said in an interview of CNN's "State of Union" Sunday that the U.S.' focus should be on Christians only as they had 'no place in Syria anymore' and were being behaded or imprisoned either by the Assad regime or Daesh.

In response to host Jake Tapper's question of how the religion of the refugees would be determined, the former Florida governor said that the U.S. already did lengthy screenings to potential refugees 'a lot' but this time should be "very, very cautious" as the country faced a 'national security challenge'.

Acknowledging the fact that the U.S. still has a responsibility to help refugees, Bush asserted that "the majority of refugees should be kept in 'safe zones' within Syria".

Labelling the Paris attacks as "a threat that is not going to go away" Bush underlined that these attacks were against Western civilizations.

Bush also criticized Hillary Clinton for saying that 'it is not our fight', and stressed that without a U.S. lead, the fight against Daesh would not prevail.

Bush also pointed out that the best way to deal with the refugee influx was to establish 'a strategy to take out Daesh and Assad'.

Contrary to Bush, his GOP presidential contenders have urged the Congress to stop allowing more refugees into the country, to the extent of calling for an outright ban on Middle Eastern refugees. Former Arkansas governor Mike Huckabee and former neurosurgeon Ben Carson are strong advocates of the anti-refugee policy.

The attacks, which killed 129 people and wounded 352 more in various public spaces around Paris, were claimed to be a work of the terrorist group Daesh who currently controls parts of Iraq and Syria.


As the wave of Syrian refugees fleeing Syria has been growing day by day Europe has been struggling to cope with the amount of refugees. The U.S. earlier this year promised to take in as much as 10,000 refugees by 2016 as assistance.