AFAD President: We are ready to share our experiences with Europe and the rest of the world 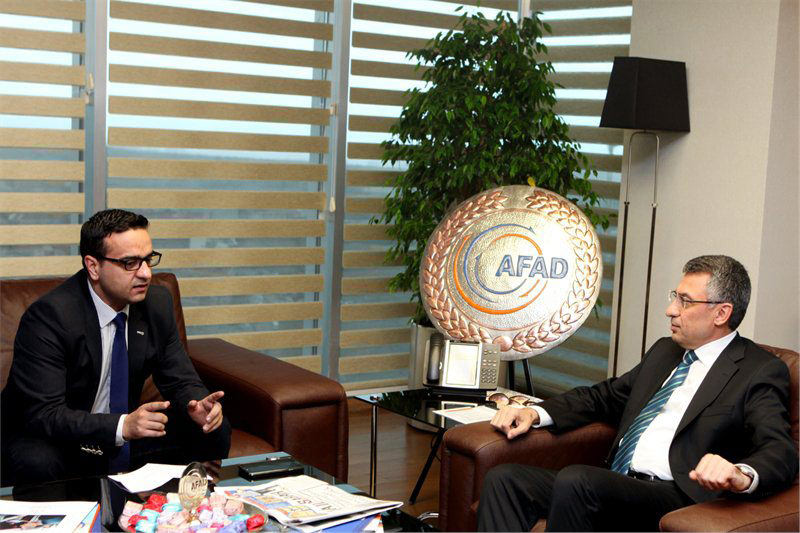 Fuat Oktay, the head of Prime Ministry's Disaster and Emergency Management Authority, says the institution is ready to share years of experiences with other countries that decide to not remain silent on the Syrian crisis

The Disaster and Emergency Management Authority (AFAD) is an organization that originally executed search and rescue missions within Turkey after natural disasters; however, with the Syrian crisis, it has branched out to provide and administer settlements for refugees, along with their integration into society. Daily Sabah spoke with AFAD President Fuat Oktay about the refugee issue and its resolution. Claiming that AFAD's most significant feature is being innovative; Dr. Fuat Oktay said that they have learned risk management properly, rather than crisis management.

If Turkey faces a new immigrant influx, Dr. Oktay stated that the primary aim would be to establish safe havens in Syria, while AFAD is ready for all scenarios. Expressing that the Syrian crisis is not limited to Turkey, Dr. Oktay asserted that their work has recently started to be appreciated by the world. Oktay also adds that they are ready to share their experience with Europe.

AFAD has been administering camps with hundreds of thousands of immigrants for almost five years. What can the European countries newly facing the immigrant crisis learn from AFAD's experiences?

As you know, AFAD has settled hundreds of thousands of people fleeing the Syrian civil war and the Islamic State of Iraq and al-Sham (ISIS) including Arabs, Kurds, Yazidis and Christians without discrimination. Our efforts are not only appreciated in Turkey, but also all around the world. AFAD's quality in providing services was recognized by the U.N. with the U.N. Public Service Award, once again proving our efficiency.

In this context, I can state that AFAD has significant experience and know-how regarding this subject. We learned not to panic and to prepare plans for the future. In addition, our experience has taught us to manage risks, rather than crisis. Thus, we shared our work regarding what kind of risks await us with the public and tried to prepare all state institutions, along with NGOs, for probable risks.

There are 13.5 million internally displaced persons (IDP) in Syria and, in the case of new crises, this population may have to leave their country. This means an influx of refugees significantly larger than what we have faced until now. Desperate people are seeking their own salvation; therefore, it has to be understood that increased border control and similar applications will not solve the problem. Europe has to develop new strategies to manage the risk, after admitting the reality of the immigration. As AFAD, we would be glad to share our experiences.

Are there any efforts to solve the integration issue of the people who have been living in the camps?

First of all, with pleasure I should express that Turkey is hosting 2.2 million immigrants at the moment and there haven't been any protests against these immigrants, as is the case with Europe. This is an indication that the Turkish people are pluralist and tolerant.

On the other hand, there are adaptation issues due to the difference in language and culture. There are some projects we are working on to solve these issues. The foremost one is about education. There is an intense effort to educate all of the children, a program which has been going on for almost a year. Some 290,000 children are currently receiving education. We are working to increase this number to 400,000 by the end of 2016.

At first, we were working on a project that was compatible with the Syrian curriculum; however, after a decision, we replaced it with the Turkish one. There is a huge demand to learn Turkish and we are planning to teach these children Turkish and integrate them into our system. We are working in coordination with the National Education Ministry for this.

Around 30 percent of the immigrant population are children, meaning approximately 650-700,000 children. Therefore, 290,000 of them receiving education is significant, yet it is only one-third of the total. Because of this, there is a need for cooperation with the international community in providing resources and education. This is the first project regarding the integration of immigrants.

Secondly, we have an educational project to make the immigrants with different ethnic and religious backgrounds and the Turkish society understand each other better. With this we are aiming to overcome prejudices. For example, lifestyle differences, such as Syrians sleeping later than Turks, are causing some problems. Therefore, we are teaching people that these issues are due to cultural differences.

Do you have plans regarding a possible new immigrant influx?

As I have said, 13.5 million Syrian IDPs may have to leave their country in the case of a new crisis. Therefore, we take the numbers into consideration and are starting to think about how we can solve it. We are hoping to take care of a possible new immigrant influx within Syria. For this, we are trying to clarify that the humanitarian zone we have been advocating is a peaceful resolution. Today, this influx has become a significant risk not only for Turkey, but for the world and especially Europe. Until today no one noticed that the service we were providing was an insurance for the European Union and the world. When Aylan Kurdi's body washed up on the shore, causing an uproar all around the world and starting an immigration wave towards Europe, our efforts started to be recognized. They are newly appreciating the activities of Turkey. We are saying that today we can establish a safe haven in which the people may live in security. As AFAD, we have gathered significant experience in this field. We are able to provide a natural living space for the people. If we can achieve this, this will be beneficial to all, especially for the European Union. The immigrants actually do not want to go to Europe, the U.S., Russia, Canada or any other country. As a solution to the Syrian crisis seems to not be possible in the short-term, we have to establish safe havens within the borders of the country. Otherwise, waves of immigrations consisting of millions will continue. This cannot be resolved only by Turkey's preventive measures.

While the Syrian crisis has been going on for almost five years, Europe has only recently faced an influx of immigrants. Could you please explain the reason?

As you know, since the first days of the crisis, Turkey has been keeping its borders open. This was ordered by President Recep Tayyip Erdoğan, who was the Prime Minister then, and this policy is still valid. Turkey is always trying to help the immigrants both in camps and outside. However, one should also empathize with the Syrian immigrants. If you cannot foresee a future in your own country, you are forced to seek it in other countries. There are 2 million refugees in Turkey, many of whom cannot work at the moment, therefore, they begin to seek other alternatives. Some statements by EU countries also attracted them. There was disinformation regarding the promises that Europe made would accept immigrants, causing a new wave. This is one of the main reasons for the influx; however, the more subtle one is that the crisis in Syria seems impossible to resolve.

Regarding technical competence, how fast can Turkey react in the case of a new influx?

As AFAD, we can respond fast and are very flexibly. For example, last year, when 200,000 Syrian Kurds fled the ISIS terror in Kobani was accepted in Turkey within a few days. This, however, does not mean that we can establish camps within a day, as they have certain qualifications to be satisfied. We can build the collecting centers fairly fast. We also utilize the existing facilities that are suitable for accommodation. However, when we consider 2.5 million immigrants, including Iraqi refugees, it is not possible to establish camps for all of them. This requires us to convert all of Turkey into camps, which is not healthy. Therefore, AFAD's capabilities should not be evaluated only as building camps.

As you know, there are ongoing negotiations regarding the action plan on immigrants in the EU. If Turkey and the EU agree on an immigrant plan, how would this agreement affect AFAD?

I cannot comment on the agreement; yet, I can say that AFAD is ready for where it is needed. Regarding the action plan you have mentioned, we are holding meetings in Geneva about a different model on humanitarian aid. We are saying that the aid provided up to today should be reshaped with an innovative approach, which we will also be discussing at next year's World Humanitarian Aid Summit in Istanbul.

We possess information regarding all of the immigrants within the database. We know who lives where. Therefore, to provide employment to these people, we propose the international community establish businesses where most of the workers live. Some major companies donate large sums of money to the U.N. or other funds in the name of social support projects. However, we know how much of this support is reflected in the field and we propose for a change in this system. Instead of this, businesses can transform their dynamism into direct investment and can actualize labor intensive investments. This can be about communications, textile etc. Some of the quota for employment can be allocated to the immigrants, thus achieving harmony between the local populace and the immigrants. With this system, locals, immigrants, the country and the entrepreneur will all win and it will become sustainable. When the company no longer wants to support its establishment, it could be turned over to the immigrants; therefore, a win-win scenario.

This proposal may not be effective, as the companies may perceive this as a call for investment. However, if the EU, the U.N. or G-20 leaders encourage the business world of their country, this will have positive results. In addition, this project will also help the integration efforts and may turn the crisis into an opportunity.

Has AFAD received any proposals from European countries for cooperation?

Of course. Consisting of nine Eastern Europe countries, the Disaster Preparedness and Prevention Initiative for South Eastern Europe (DPPI SEE) asked for our cooperation in lecturing them about camp administration and the first-step policies and applications.
RELATED TOPICS