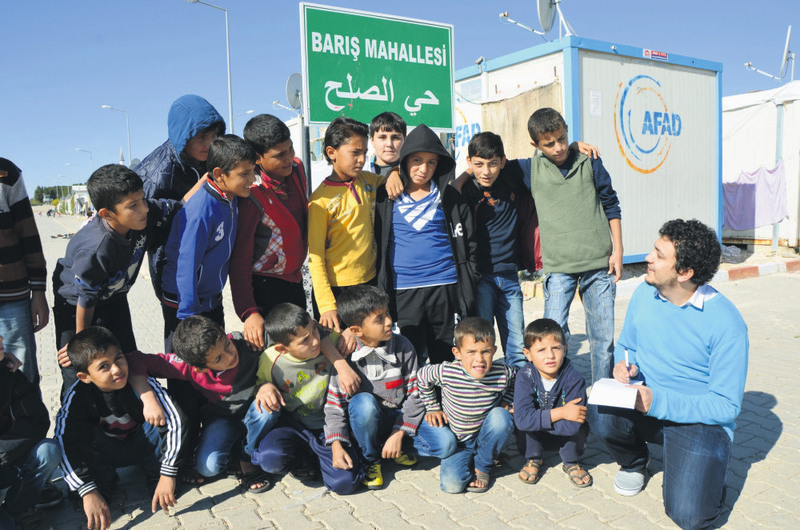 Around 1 million of the 2.2 Syrian refugees in Turkey are children and tens of thousands who were born in the host country have not seen their motherland due to the ongoing civil war. All of them have a single demand from the world: ‘Oust the cause of the chaos: Bashar Assad'

When they realized that it was a Turkish journalist reporting for an English-language newspaper, their jaws dropped and then they tried to talk in English, full of wonder.

There are almost 3,000 children living with more than 10,000 people in the refugee camp, located in the Harran district of the southeastern Şanlıurfa province.

Despite their age, and compared to their peers in other countries, they are well aware of what is going on both in Syria, Turkey and the world. They did not fail to make remarks on the upcoming G20 Summit, which will be hosted by Turkey in the southern province of Antalya, Nov.15-16.

"We want to return to our country. We want to play in our homes and streets. Hundreds of people are dead, our homes were destroyed. They [the countries of the world] shall repair them," Mustapha Siddiq,13, said.

His brother works in a furniture shop in İzmir and came to the camp from Aleppo, in 2013.

Although he claims that he can speak Turkish fluently, he cannot stop talking in Arabic for most of our conversation. He likes to talk. It is as though he thinks the more he speaks, the more people will hear him.

"You know the situation," he says, seeming bashful, he declares that he cannot speak English and he no longer wants to learn it.

Their Syrian teachers are working to continue their education in the school built at the camp site and the children seem happy with the education they are given, saying that it is sufficient considering the conditions.

Some of them play football in the schoolyard, while hundreds of others, mostly aged around 6 and 7, were lined up by their teachers and walking all around the area. Although the children from all ages know they are far from their own country, their smiles are still warm enough. When asked about how they can return to their country, not just Mustapha but dozens of kids surrounding him started to chant in unison: "Shilo Bashar! (Remove Bashar)."

Turkey, the U.S., EU and Gulf countries along with the Syrian opposition suggests that the solution in Syria can only be accomplished with Syrian leader Bashar Assad's removal, while Russia and Iran, his staunch allies since the beginning of the four-and-half year crisis, are bargaining hard to keep him in power.

'RISKY TO TRAVEL EUROPE, HELP TO END THE WAR'

Omar, 12, indicates that he has in fact no message to give the world leaders coming to Antalya, except President Recep Tayyip Erdoğan, saying "If they wanted to give us a helping hand, they would have accepted us into their countries. Nobody except Erdoğan heard our voice."

Recalling the thousands of refugees who have become miserable on the road to refuge in European countries, Muhammad, 13, says it is nonsense to go those countries due to the risk of death.

More than 150,000 people crossed from Turkey to Greece last month, compared to less than 8,500 in October 2014, the EU's agency Frontex said Tuesday. The total number arriving at the Greek islands was 540,000 in the period from January to October according to latest figures. The number of refugees crossing the EU's external borders was 1.2 million, from January to October this year, four times higher than the 282,000 recorded crossings last year.

The plight of migrants trying to reach the EU from Turkey had drawn an emotional international response after the image of Aylan Kurdi, a 3-year-old Syrian boy whose body washed ashore on the Turkish coast in September, hit the headlines, triggering outrage and forcing the EU to reconsider steps to tackle the crisis, with several countries announcing they would allow in more migrants.

European Council President Donald Tusk said ahead of a summit on migration that the EU was under pressure from the events, with governments reviewing over 1 million asylum applications between them, "a record number that would test any developed democracy."

Not only being awareof the G20 summit, Turkey's Nov. 1 elections became a matter of debate among the children and it is easy to see their happiness with the election results. "Fortunately Erdoğan [Justice and Development Party (AK Party)] won the elections. The Peoples' Democratic Party (HDP) was oppressing the people," Mustapha says.

According to the official results, the AK Party received 317 seats by securing 49.48 percent of the vote, meaning it won the majority needed to form a single-party government.

Early elections were called for Nov. 1 following the June elections, when no party achieved to win an outright majority and 45 days of subsequent talks between the parties failed to produce a coalition.

Regarding the elections, adults at the center had even celebrated the results like joyful children, marching through the streets in the camp and distributing candies for residents, officials of the camp administration stated.

"We have been more worried than the Turks. However after the results we felt some relief. People want to have stability in this country," says Kavsar Sallum,31, who lives with her husband Yahya,38, her brother Rakel,27, and her five children. They have been living in the camp since 2012.

Refugees live in two-room container houses, as all furniture and home appliances including a television, DVD-player and kitchen utensils and cutlery are provided by Turkey's Disaster Agency (AFAD). Each individual is granted 85 TL ($30) monthly and their clothes are also supplied by the institution.

Kavsar indicates that Syrians here have become like families and they have lost faith in the world's countries, adding that there will be no concrete solution expected from the G20 meeting. "We do not want to be people of property. We only want to return to our country. However, all the great powers in the world cannot send Assad away," she says.

When asked about whether she wants to leave for Europe, she says "What am I supposed to do going to Europe? Turkey is better. There is hope here."

Turkey has taken in more than 2 million Syrians refugees from its southern neighbor and is a springboard for migrants heading to the EU. The country is struggling to cope with the influx and has repeated calls to the international community to do more for refugees.

Ankara's proposal for the establishment of a safe zone in Syria to keep displaced Syrians in their own country and stem the flow to Turkey and the EU is not supported by other countries, which prefer debating the number of refugees they will allow in instead.

The EU's Turkey Progress Report for EU membership was released on Tuesday and praised Turkey's humanitarian support for the refugees and called on the EU to step up its cooperation with Turkey in the crisis. Nevertheless, it is not unreasonable to be skeptical about the chances of a concrete solution being set out for the problem at the G20 Summit, although what Syrian refugees want is clear.

With best regards to the G20 summit leaders and specially to the permanent members of the U.N. Security Council.

We would like to draw your attention to the fact that protecting civilians is one of the highest priorities of the U.N. Security Council. Therefore, we kindly request you to establish a safe zone for Syrian civilians in northern and southern Syria in order to protect them from the brutality of Syrian president Bashar Assad's warplanes and chemical weapons. Thus, Syrian people would be able to return to their country, which would serve as a solution to the refugee crisis, or at least prevent more tragedies linked to it.

We also assure you that elimination of terrorism in Syria is not viable without eliminating its main cause, Assad, and without bringing him to the International Criminal Court, as the main one responsible for all the massacres committed in Syria, not to mention the use of chemical weapons in Ghouta, Damascus.

We call for the unity of Syria, in terms of land and people.

While you are meeting in a warm and safe environment, there are a lot of children and families suffering in the neighboring country. Hundreds of thousands of people do not find anything but caves, tents and the shade of trees to find refuge in this cold winter. Children, women and the elderly suffer as no one can imagine since they have been exiled and killed by their president who is supposed to protect them just as you protect your citizens.

You know and witness that Syrian peoples' suffering has no reason, but has come from their call for the very basic right of having respect and a dignified life.

We call you to support the Syrian people and to put an end of their tragedy and suffering.
It is not believable that death, torture and prison can be the destiny of the people who call for freedom, dignity and democracy in the 21st century.
We call for the support of those who escaped death, whether inside Syria or in neighboring countries. We call for providing people in besieged areas such as Ghouta with food and medical aid. It is very awkward to watch people dying on our borders while you call for respecting human rights.
Syria deserves your help to save it from the tragedy resulting from the current regime and the states that support it like Russia and Iran and terrorist groups such as Hezbollah and others.

We hope for your assistance to end the genocide and war crimes we face.

To your majesties King Salman and President Hollande,

From a Syrian citizen living in exile with hope that this letter will attract your attention.

Syrians who started their revolution against oppression, corruption and injustice to achieve justice, integrity and regain their freedom and dignity, and who were later faced by all means of oppression and criminal acts, will never compromise their rights as humans and as citizens. These rights are guaranteed by Islam and all heavenly religions and international law. Syrians are heading toward gaining their rights through all possible and legitimate ways such as political resolutions under the five principles mentioned by the Syrian Islamic Council:

1. Assad and the components of his regime shall be overthrown and brought to court.
2. Oppressive intelligence and military bodies shall be dismantled and replaced with patriotic bodies along with keeping other state institutions untouched.
3. All foreign, sectarian and terrorist groups shall evacuate, including, Iranian forces, Hezbollah, Abu al-Fazl militias and the Daesh.
4. Syria shall be a sovereign state, united in terms of people, land and identity.
5. Quotas based on political and sectarian differences shall be rejected.
Your efforts to solve the Syrian issue are highly appreciated
RELATED TOPICS