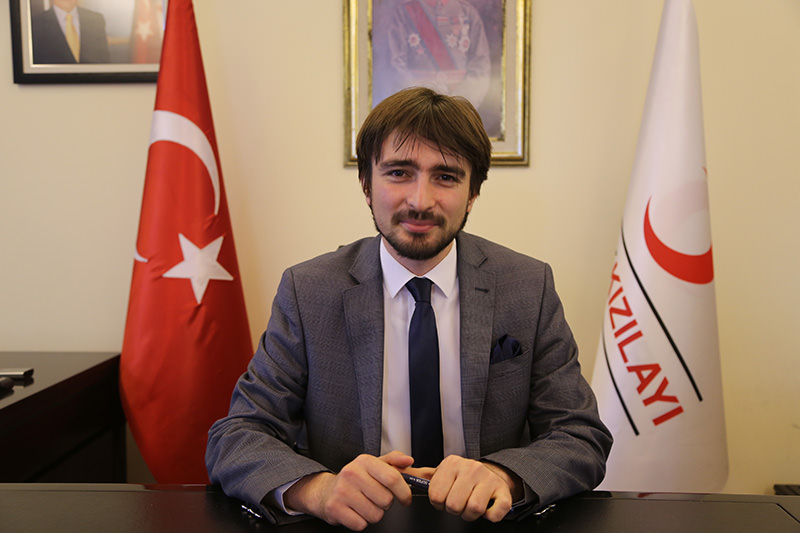 As the war continues in neighboring Syria, more people flee the turmoil and seek refuge in Turkey, which already hosts 2.2 million Syrians and spent over $8 billion for them and only received around $400 million dollars. The director general of Turkish Red Crescent says int'l community should share the financial burden of the humanitarian responsibility

Expressing that they have permanent teams in five countries besides Turkey, Güllüoğlu said that with the Syrian crisis they prioritized delivering humanitarian aid and providing food to those who need it most. Güllüoğlu said that they have started to educate refugees on various subjects such as Turkish, which will help their integration process, along with their humanitarian activities, but said that the most significant problem is the lack of finances.

Could you please summarize the humanitarian aid efforts made by your institution?

The Turkish Red Crescent is currently 147 years old and it is historically connected to the Ottoman Empire. The institution has always provided help to those in need both in times of war and peace. Therefore, with the increasing prosperity of Turkey in the last 10 years we had the opportunity to expand our capabilities and provide more aid to other countries. Currently, the Turkish Red Crescent has teams in five countries. We have been working in Somalia since 2011, in Palestine since 2008 and in Iraq since 2013. In addition, we have also been in Pakistan and Bangladesh for many years. We have also made efforts in various regions that have experienced natural disasters or crises, such as Nepal, the Philippines, Bosnia-Herzegovina and Chad. Moreover, we provide aid in healthcare, education and many other needs as well. 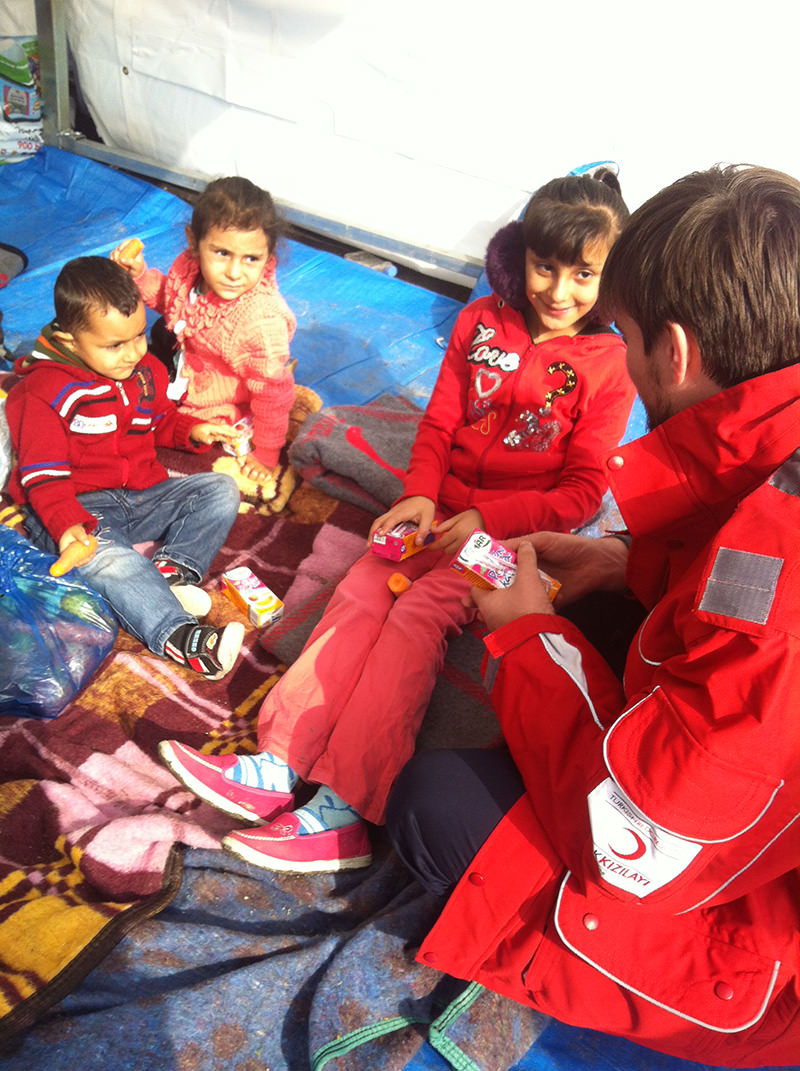 The Turkish Red Crescent is an institution that exists through donations, and occasionally we take on the task of delivering supplies demanded from the Republic of Turkey. As is indicated by the aid provided to Somalia and West Africa, it is becoming more and more international. In the last four years the crisis in Syria has gained significance. We can summarize our work in Syria in three different fields. Firstly, the Turkish Red Crescent oversees the nourishment efforts in coordination with the World Food Programme (WFP) in the camps administered by Turkey's Disaster and Emergency Management Agency (AFAD) and with UNICEF in regard to efforts related to children.

Secondly, we establish community centers. We are aiming to increase the number of these centers to 20 within 2016, which we already have in the cities of Urfa, Ankara, Istanbul and Konya. The international funds that we utilize for these projects are crucial. Again, in coordination with the WFP, we distribute Turkish Red Crescent cards to the vulnerable population, which include orphans, the elderly and the disabled. This card can be used in a selection of stores and make a person or a family eligible for having their monthly provisions. We started this application in Urfa, Hatay, Kilis and Antep, four cities near the border that hold most of the refugee population. Our aim is to distribute this card to those who need it, including Syrian refugees. We are certainly proud of this project and it is being appreciated. With this project we resolve one of the basic needs of humans – hunger.

Thirdly, we have a cross-border aid effort called Ground Zero Aid. When individuals or institutions want to send aid to Syria through Turkey, we are the mediators. The Turkish Red Crescent is able to control whether the aid reaches its intended locations, which eliminates the distrust regarding where the aid is. Since 2011, the aid provided to Syria by the Turkish Red Crescent is over TL 1 billion ($350 million). There is medical equipment in these aid packages along with basic ingredients such as flour and sugar.

We should also thank the Customs Ministry, as they provide help during the transportation of these goods. We believe that the aid to Syria should increase in amount, as migration starts from their country. Syrian citizens first migrate within their country and then to other countries. In addition, while the U.N. has aid convoys in Syria, they are insufficient in number. They use Damascus as their headquarters, which limits them from reaching all the points in northern Syria. In this context, Turkey is an important country for reaching war-torn northern Syria.

Could you please elaborate on the community center project? As a humanitarian aid organization, what are your responsibilities?

We hold all of the activities within the community centers while in cooperation with other institutions. In these centers we provide lectures on various subjects such as Turkish, Arabic, English, basic computer training and tailoring.

Do the refugees want to return to their country or stay here? What are your observations?

We held a survey, and according to it, 70 percent of refugees want to return to their country if the war is over. If the war continues, 78 percent said they would want to stay in Turkey. They want to stay in Turkey mostly due to the social and humanitarian projects. The 22 percent that do not want to stay in Turkey point to the aspects in our organization that are lacking. On the other hand, Turkey is also a country that is on the migratory route. The root of the migration issue should be investigated further by the mechanisms of the G20 summit, which should seek a solution. Otherwise, this issue will persist. I believe it is not right to provide arms on one side while talking about the refugee crisis.

How is the total aid of your organization distributed among domestic and regional countries?

When we consider that Syrian refugees are in Turkey, most of the aid is used in Turkey. If we are to talk about proportions, we could say 60 percent of the aid is domestic while the rest is delivered to other countries.

As you have said, to deliver aid to Syria, you mostly have to cross the border. Does the Islamic State of Iraq and al-Sham (ISIS) affect your efforts, and if so, how?

We send aid through border gates. If the region across the border gate is under control of a terrorist organization, whether it is ISIS, the Democratic Union Party (PYD) or al-Nusra Front, we do not use that border gate again. Currently, the active border gates are positioned on the western side of Syria and they are opened and closed according to orders from the Customs Ministry, changing the direction of the aid to be delivered. In addition, the map of Syria is currently very dynamic. For example, citizens of a city that is 30 kilometers away from you may move to another place that is 50 kilometers away, so our routes constantly change. Moreover, needs change according to the season. While there is an increased demand for medicine in summer due to contagious diseases, in winter heating demands rise. If you remember, people died due to hunger and entering the Yarmouk Camp in Palestine was prohibited in the winter of 2014. We hope and expect similar incidents won't happen again.

What are the most important obstacles you face while trying to provide aid?

While Turkey mobilized all of its means, there are not enough financial contributions coming from foreign and international organizations. This stops us from reaching some of the people who are in need of aid. Besides the constant change of territories and contagious diseases, this is the most important issue.

What level of cooperation exists between your organization and international ones?

Regarding Syria, until the last six months, it was almost nonexistent. However, with the influx of migrants into Europe, I can say there is an increase in demand for international cooperation.
Last Update: Nov 16, 2015 2:57 pm