Assad vows to remain in power until ‘terrorists’ out of Syria 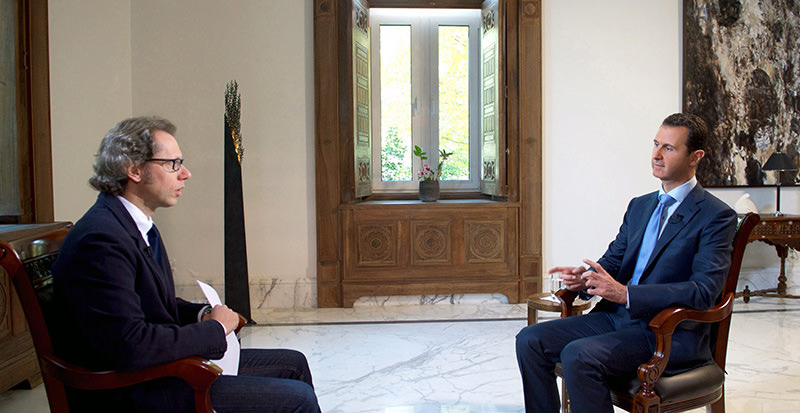 by Compiled from Wire Services Nov 19, 2015 12:00 am
Bashar al-Assad vowed to remain in power and stall a possible political process as long as "terrorist" occupation in Syria remains, while blaming the West for the creation of such organizations.

Speaking in an interview with the Italian state television RAI, broadcasted on Wednesday, Assad said that "nothing can start before defeating the terrorists who occupy parts of Syria."

"If we talk after that, one year and a half to two years is enough for any transition," he added.

Foreign ministers from 19 countries, who met recently in Vienna, set a January 1 deadline to start negotiations aimed at achieving a transitional government and eventually elections.

Assad said if Syria's people want presidential elections "there will be no red line" against holding them. Asked how much territory the government still controls, four and a half years into a civil war, Assad replied, "geographically speaking the situation changes day by day."

Assad, who is being held responsible almost unanimously by world leaders for the civil war and state terror imposed to his own nation, again blamed the West for the creation of the DAESH terror organization and his country was not a breeding ground for DAESH.

"I can tell you DAESH doesn't have the natural incubator, social incubator, within Syria," he said, and blamed Turkey, Saudi Arabia and Qatar, main supporters of moderate Syrian opposition both targeted by regime and DAESH, for the creation of DAESH with the help of the West. "DAESH didn't start in Syria, it started in Iraq, and it started before that in Afghanistan," he said, quoting former British Prime Minister Tony Blair as saying "the Iraqi war helped create ISIS".

Blair's "confession is the most important evidence," Assad added.

Last week's deadly Paris attacks, in which 129 people were killed in a wave of shootings and suicide bombings across the French capital claimed by DAESH, have galvanized international momentum for a diplomatic solution to Syria's civil war.

More than 250,000 people have died in the conflict and millions have fled, as cities were razed to ground by regime forces and DAESH has seized control of large swathes of territory across Syria and Iraq.
Last Update: Nov 19, 2015 11:31 am
RELATED TOPICS