Canada pushes back deadline for accepting 25,000 Syrian refugees to February 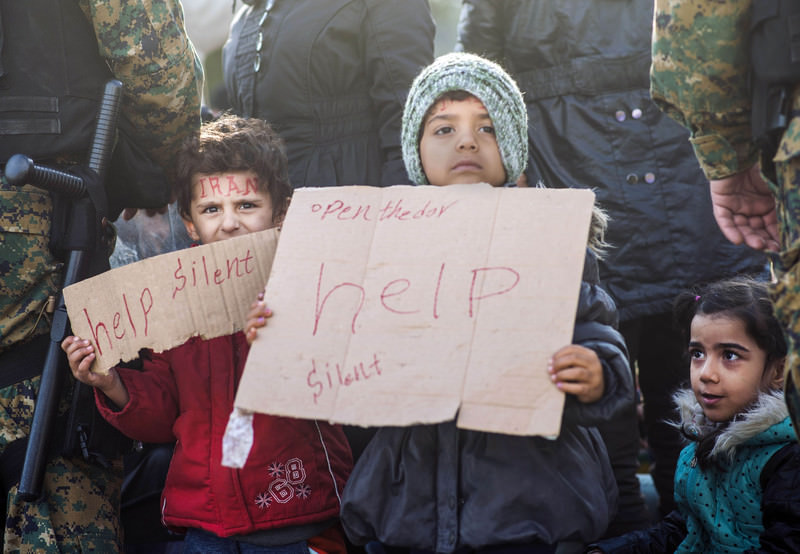 A child holds a notebook with a message reading ,help, as migrants and refugees from Iran sit on railway tracks while waiting to cross the Greek-Macedonian border near Gevgelija on November 24, 2015. (AFP Photo)
by Associated Press Nov 24, 2015 12:00 am
Canada's new Liberal government said Tuesday it will resettle 10,000 Syrian refugees by the end of the year and another 15,000 by the end of February.

Prime Minister Justin Trudeau had wanted to resettle 25,000 refugees in Canada by Dec. 31 but faced some pushback following the deadly attacks in Paris. Immigration and Refugee Minister John McCallum said they wanted to do it fast but also want to do it right so they are taking a little bit more time to resettle them.

The government said health and security screening will take place overseas and once that's complete, refugees will be flown to Toronto and Montreal, largely on chartered aircraft. Military aircraft will assist if needed.

"We will welcome them with a smile," McCallum said. "This is a wonderful humanitarian gesture by all Canadians."

Tuesday's announcement could raise alarm in the U.S., where many Republican governors have said they don't want any Syrian refugees.

The U.S. plans to take 10,000 over the next year. Germany saw 758,000 refugees and other migrants arrive between January and October. Sweden is expecting around 200,000 this year.

Defense Minister Harjit Sajjan said military barracks are being prepared only as a precaution if temporary accommodation is needed. The government said it will spend $678 million Canadian (US$510 million) over six years on the resettlement effort.

Canada's commitment reflects the change in government after last month's election. Former Conservative Canadian Prime Minister Stephen Harper, who lost the Oct. 19 election to Trudeau, had declined to resettle more Syrian refugees, despite the haunting image of a drowned 3-year-old boy washed up on a Turkish beach that focused global attention on the migrant crisis stemming from the civil war. The boy had relatives in Canada and the refugee crisis became a major campaign issue.

Brad Wall, the Conservative premier of Saskatchewan province, had said he had problems with the original deadline of bringing 25,000 refugees by Dec. 31 for security reasons, but said he believed Canada should welcome the refugees.

More than 4 million Syrians have fled their country since the conflict began in 2011.

Canada has long prided itself on opening its doors to asylum seekers. In times of crisis in decades past, Canada resettled refugees quickly and in large numbers. It airlifted more than 5,000 people from Kosovo in the late 1990s, more than 5,000 from Uganda in 1972 and resettled 60,000 Vietnamese in 1979-80. More than 1.2 million refugees have arrived in Canada since World War II.
Last Update: Nov 24, 2015 11:29 pm
RELATED TOPICS