Obama warns Daesh leaders 'you are next', calls on MidEast allies to increase military action 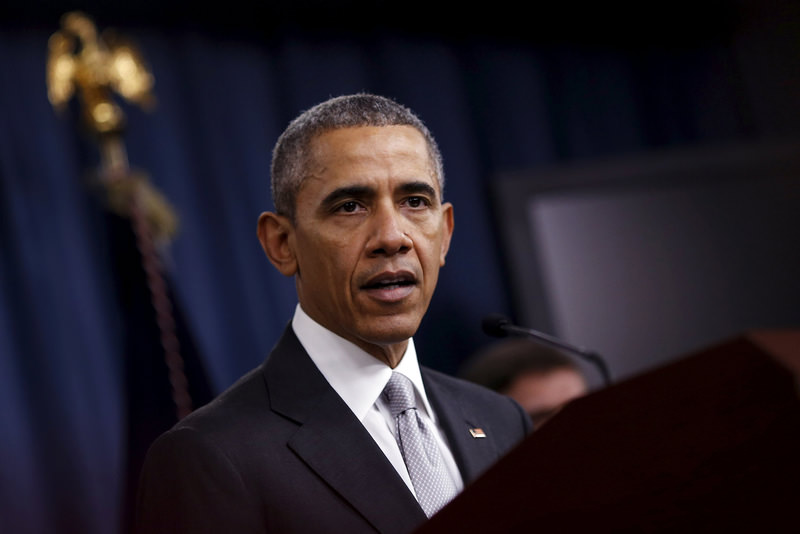 U.S. President Obama delivers a statement after attending a National Security Council meeting on the counter-Islamic State campaign at the Pentagon in Washington, Dec 14, 2015. (REUTERS Photo)
by Dec 14, 2015 12:00 am
U.S. President Barack Obama voiced fresh determination to destroy Daesh Monday, vowing to kill the group's leaders and win back territory in the Middle East.

Sounding a notably more strident tone, Obama said that the United States and its allies were taking the fight to Daesh in Iraq and Syria.

"We are hitting Daesh harder than ever," said Obama, in a second address following the seemingly Daesh-influenced attack in San Bernardino that has raised questions about his strategy.

"As we squeeze its heart, we'll make it harder for Daesh to pump its terror and propaganda to the rest of the world," Obama insisted at the Pentagon, after meeting with top military and national security advisors.

"Daesh leaders cannot hide and our next message to them is simple: You are next."

Meanwhile, he said, Iraqi forces were moving to take Ramadi "encircle Fallujah and cut off Daesh's supply routes into Mosul."
From the air, Obama said the United States and its allies had begun targeting "oil infrastructure, destroying hundreds of their tanker trucks, wells and refineries."

"Since the summer, Daesh has not had a single successful major offensive operation on the ground in either Syria or Iraq," Obama said.

Even before the December 2 attack by a Muslim husband and wife in California killed 14 people, polls showed that more than 60 percent of Americans disapproved of the way Obama is handling Daesh and the broader terror threat.

That is a major shift since Obama's first term in the White House, when he was hailed for authorizing a high-risk special forces raid that killed Osama bin Laden.

But like his primetime Oval Office address a week ago, Obama on Monday offered no shift in policy, admitting: "We recognize that progress needs to keep coming faster."

Obama -- with the failures of occupations in Iraq and Afghanistan seared into his political psyche -- has steadfastly ruled out deploying large numbers of infantry troops.