Humans of New York's Syrian refugee 'Scientist' arrives in US 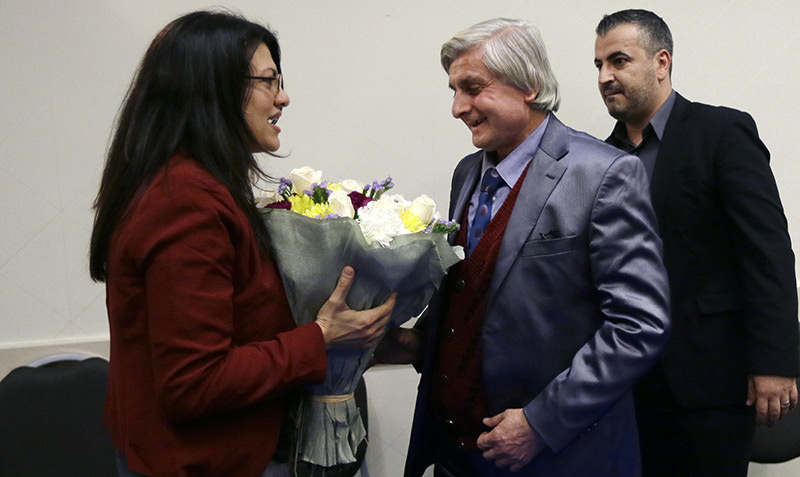 Syrian refugee Refaai Hamo, center, is greeted by Michigan State Rep. Rashida H. Tlaib at a news conference, Thursday, Dec. 17, 2015, in Romulus, Mich. (AP Photo)
by Associated Press Dec 18, 2015 12:00 am
A Syrian man, who became known as "The Scientist" on the Humans of New York blog, and whose harrowing, tragic story spurred supporting words from President Barack Obama and a successful fundraising effort launched by actor Edward Norton has arrived as a refugee into the Detroit area.

Refaai Hamo and four of his children landed at Detroit Metropolitan Airport, anxious to rebuild their lives in suburban Oakland County. The 54-year-old, who suffers from stomach cancer, fled to Turkey from Syria after a missile attack on his home killed his wife and one daughter.

"If they will only call me a refugee ... I don't want to be here. I want to be a good citizen," said Hamo, accompanied by his 18-year-old son at a nighttime news conference at the Romulus airport. The conference was arranged by Lutheran Social Services of Michigan, the state's largest refugee resettlement agency.

Hamo was profiled earlier this month on the popular photo blog Humans of New York and identified as "The Scientist." He said in text accompanying seven photos that he "was overseeing a project outside the city when the missile hit my house" and those of relatives next door. He said 16 people died, seven from his family, and he left Syria "with nothing." 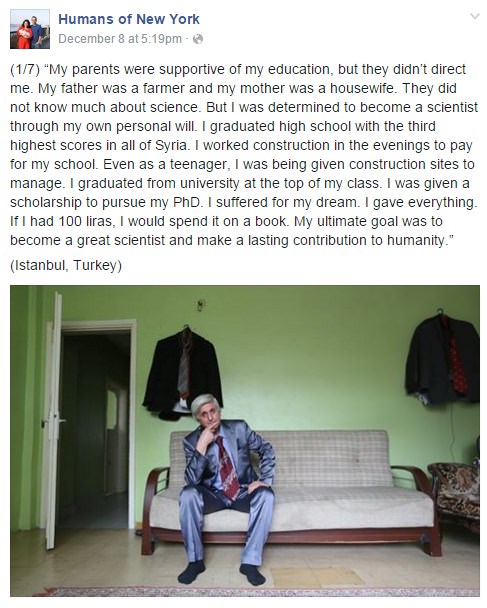 Hamo said his cancer has gone untreated because he lacked insurance, and wants to get well so he can "make a lasting contribution to humanity."

After reading the story, Obama called Hamo "an inspiration" on the president's official Facebook page, adding that he's "proud that you'll pursue your dreams here."

"Michigan will embrace you with the compassion and support you deserve," Obama's post said. "Yes, you can still make a difference in the world, and we're proud that you'll pursue your dreams here. Welcome to your new home. You're part of what makes America great." 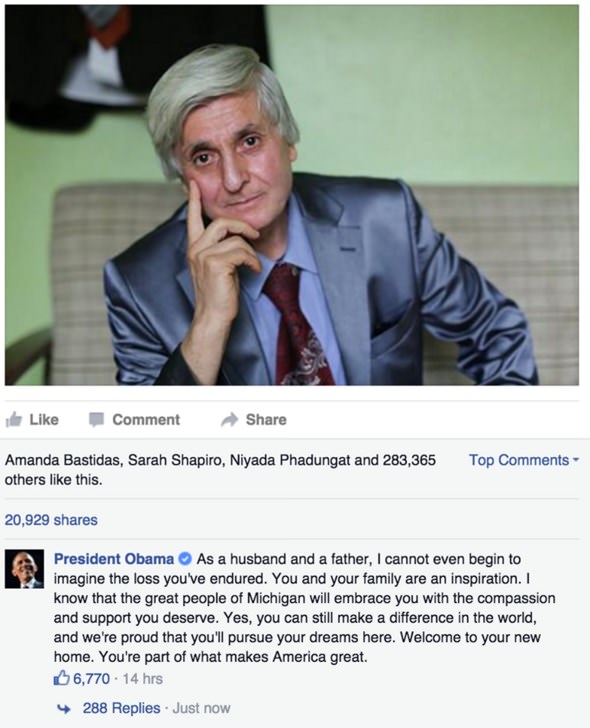 Hamo arrives at a time when the resettlement of Syrian refugees has faced backlash from many Republican governors, lawmakers and presidential candidates in the wake of deadly attacks in Paris and San Bernardino, California, which heightened terrorism fears in the United States. Republican front-runner Donald Trump, whose campaign slogan is "Make America great again," has called for temporarily banning Muslims from the United States a proposal criticized by his rivals.

Michigan Republican Gov. Rick Snyder, who considers himself one of the nation's most pro-immigration governors and has passionately spoken on behalf of newcomers from the Middle East and elsewhere, nonetheless urged a pause in expanding resettlement efforts beyond current commitments until security concerns are addressed. Snyder, who said he welcomes Hamo and his family to Michigan, hasn't proposed blocking Syrians outright as other state leaders have, and has sought to distance himself from Trump.

"It's clear it became overly politicized across the political spectrum. I think that's unfortunate because I view this as a national security interest issue and it needs to be done in an appropriate balance with the spirit of immigration, which is at the core of America," Snyder said. "There are other people that have politicized this. I've tried to stay true to the course of striking this appropriate balance and doing it in a factual fashion."

For his part, Norton wrote that Hamo's story "moved me to tears," and created the campaign that has raised roughly $450,000 through thousands of individual online donations for Hamo's family and his medical treatment.

Norton told The Associated Press he would like to help other U.S.-bound Syrian refugees profiled by Humans of New York once Hamo's needs are met, and "we're well on our way to being able to do that." He added he's inspired by "the human story that's behind the immigration stories."

"It's not only what our country is built on ... but it's who we say we are in so many ways," said Norton, who is leading the campaign on CrowdRise, a charitable crowdfunding site he co-founded. "It's profoundly ironic when there are people (getting) political momentum out of ... the repudiation of the idea that America is a place for those kinds of people."