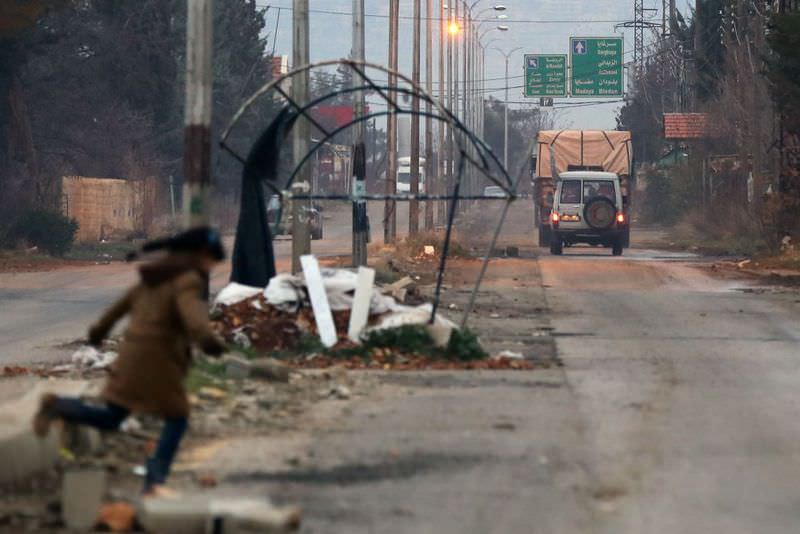 A Syrian girl crosses the road on the outskirts of the besieged rebel-held Syrian town of Madaya, as an aid convoy waits to enter the town on Jan. 11.
by Daily Sabah with Wires Jan 16, 2016 12:00 am

As thousands of people struggle with starvation, the U.N. is stepping up pressure on Syria's warring parties to lift sieges on towns. U.N. Secretary-General Ban Ki-moon lashed out at warring sides, particularly the Syrian government, for committing war crimes by deliberately starving civilians

Speaking after briefing the U.N. General Assembly on his 2016 priorities, Ban said harrowing images of starving civilians in the besieged town of Madaya reflected a new low in a war that had already reached "shocking depths of inhumanity."

"Let me be clear: The use of starvation as a weapon of war is a war crime," Ban told reporters. "I would say they are being held hostage, but it is even worse. Hostages get fed," Ban said.

France, Britain and the United States called for an emergency meeting of the U.N. Security Council to press demands for aid to reach some 400,000 civilians facing starvation in besieged areas.

Aid was delivered to Madaya and two Shiite villages on Monday for the first time in months. Madaya is under siege by pro-Syrian government forces, while two villages in Idlib province are encircled by rebels. More aid reached both areas on Thursday. "All sides, including the Syrian government, which has the primary responsibility to protect Syrians, are committing atrocious acts prohibited under international humanitarian law," Ban said.

He said U.N. teams in Madaya had seen "scenes that haunt the soul." "The elderly and children, men and women, who were little more than skin and bones, gaunt, severely malnourished, so weak they could barely walk, and utterly desperate for the slightest morsel. U.N. teams have witnessed scenes that haunt the soul," Ban. He said some 400 men, women and children in Madaya were in such a dire state from malnutrition and other conditions that they were in danger of dying and needed immediate medical attention, including possible evacuation.

Some 400,000 people in Syria were besieged, with about half in areas controlled by DAESH, some 180,000 in areas controlled by the Syrian government and about 12,000 in areas controlled by armed opposition groups, Ban said. The United Nations is struggling to deliver aid to about 4.5 million Syrians who live in hard to reach areas, including those 400,000 people in besieged areas. "In 2014, the U.N. and partners were able to deliver food to about 5 percent of the people in besieged areas. Today, we are reaching less than 1 percent. This is utterly unconscionable," Ban said. He urged key regional and world powers, specifically the International Syria Support Group, to press Syria's warring parties for sustained and unimpeded humanitarian access and an end to the use if indiscriminate weapons in civilian areas.

The Syria civil war, which will enter its sixth year in March, has left more than 250,000 people dead and turned the country into the world's largest source of refugees and displaced persons, according to the UN.

The U.N. wants to bring together Syria's warring factions on Jan. 25 to begin peace talks in Geneva. Participants will work within the framework of a plan set out during three rounds of international talks to foster an end to the civil war. Humanitarian aid access is seen as a key confidence-building measure ahead of the new round of Syrian peace talks. Diplomats suggested that the new peace effort would have no chance of success if the humanitarian crisis remains desperate.

"It will be difficult for them to negotiate, while their children and close ones are threatened with famine or death," said a Security Council diplomat. In December, the U.N. Security Council adopted a resolution calling for a U.N.-backed political process that would let Syrian factions form a transitional governing body in six months and to hold U.N.-supervised national elections within 18 months.
RELATED TOPICS