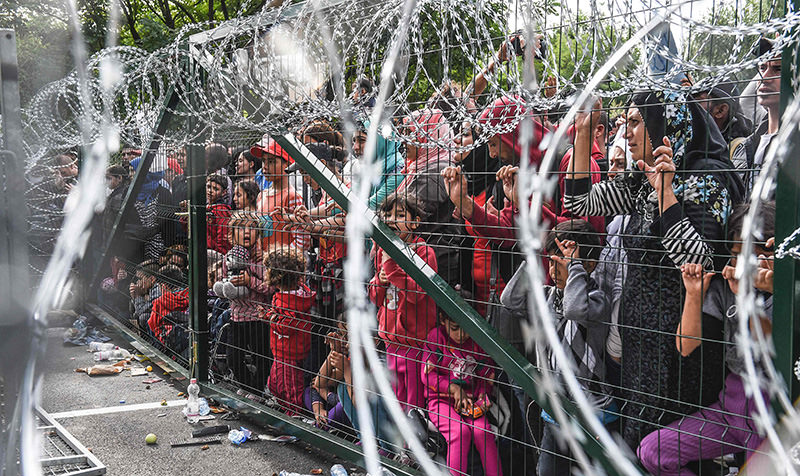 Refugees stand behind a fence at the Hungarian border with Serbia near the town of Horgos on September 16, 2015 (AFP Photo)
by Compiled from Wire Services Jan 19, 2016 12:00 am
The European Union's response to the refugee crisis is not only a "catastrophic failure" but has created more business for people smugglers, international aid group Doctors Without Borders (MSF) has said.

In a report released Tuesday, MSF collected testimonies from its staff and patients as well as medical data which details the worst refugee and migrant crisis facing Europe since World War II.

"Not only did the European Union and European governments collectively fail to address the crisis, but their focus on policies of deterrence along with their chaotic response to the humanitarian needs of those who flee actively worsened the conditions of thousands of vulnerable men, women and children," Brice de le Vingne, director of operations for MSF, said in a statement on Tuesday.

The group urged the EU to create safe and legal routes for people seeking asylum, including on the land border between Turkey and Greece, to decrease the demand for human smuggling networks.

"Far from stemming the flow of refugees and migrants, Europe's lack of assistance and its restrictions on movement have simply forced desperate people to put their lives and health at risk by resorting to the services of smugglers and taking treacherous routes, including the extremely dangerous sea crossings in the Mediterranean and Aegean Seas," MSF said in the report.

The group urged the EU to create more legal ways to come to Europe and allow asylum applications at the land border between Turkey and Greece.

Meanwhile, the European Union's top migration official says so-called "hotspots" should be up and running in Greece and Italy within a month in an effort to better control how migrants flow into the bloc and conduct early security checks on them.

The hotspots intended to register new arrivals, take fingerprints and other data, and perform background checks. Those with no chance of asylum would quickly be sent home, while others would be more evenly distributed among EU nations.

Migration Commissioner Dimitris Avramopoulos was quoted by Germany's Sueddeutsche Zeitung on Tuesday as saying he sees no immediate end to the flood of asylum seekers and that it's critical to get hotspots running quickly.
Last Update: Jan 19, 2016 1:41 pm
RELATED TOPICS