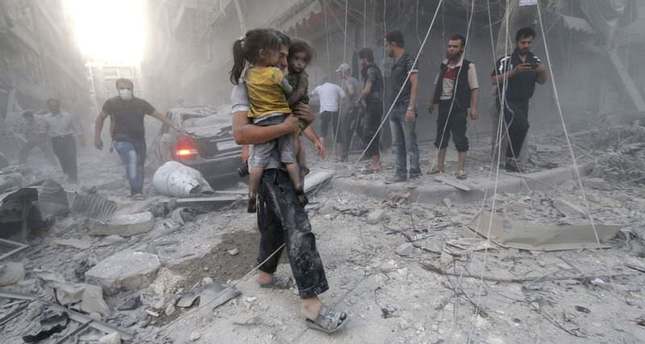 by Daily Sabah with Reuters Feb 01, 2016 12:00 am
A report by international charity Oxfam on Monday showed that Russia, which is one of the countries most deeply involved in Syria's civil war, is among the least generous in helping its victims.

Oxfam released the report ahead of a donor conference in London on Thursday along with an appeal for increased aid and resettlement abroad for 10 percent of the refugees registered in Syria's neighbors by the end of the year.

Most rich countries were contributing less than their "fair share" of financial aid, the amount a country should contribute relative to the size of its economy. Countries gave 56.5 percent of the $8.9 billion requested by aid appeals for 2015, it said.

Russia gave 1 percent of its fair share. It has not pledged to take in any Syrian refugees either.

At the same time, Moscow supports the Assad regime with air strikes against rebel groups, facilitating Daesh advance in the contested areas.

Among western countries, France, which joined the United States-led air campaign against Daesh in Syria in September, gave 45 percent of its "fair share", Oxfam said. Paris took in about 5,000 Syrian refugees last year.

"As a bare minimum the international community needs to fund the aid appeals (for refugees)," Oxfam's Daniel Gorevan said via telephone. The conflict has created more than 4 million refugees and displaced another nearly 7 million inside Syria.

The United States donated 76 percent of its fair share, but was the biggest single donor. Several European countries gave well over their fair share, such as Denmark (318 percent), Norway (385 percent) and Britain (237 percent).

On refugee resettlement, the United States has pledged to take seven percent of its fair share with at least 10,000 refugees, and Britain 23 percent with 20,000 by May 2020.

Canada, Norway and Germany have pledged to take well over 100 percent of their fair share of refugees. Germany registered over 158,000 Syrian asylum seekers last year and many more refugees from the civil war are believed to be in the country.

Russia has not pledged to take any refugees and Gulf countries were not included in the resettlement figures because they have not signed the U.N. Refugee Convention. They have not officially taken in any Syrians as refugees.

Gorevan said there had been a "significant drop off in Gulf funding" for Syria aid and the overall lack of funds was exacerbating the crisis.

"The impact of the aid cuts has been quite devastating, with food rations cut, and less access to services like health and education. A smaller number of refugees are receiving less assistance," he said.

The crisis is straining neighbouring countries, which host the vast majority of Syrian refugees and have contributed disproportionately highly as a result.
Last Update: Feb 01, 2016 2:24 am
RELATED TOPICS