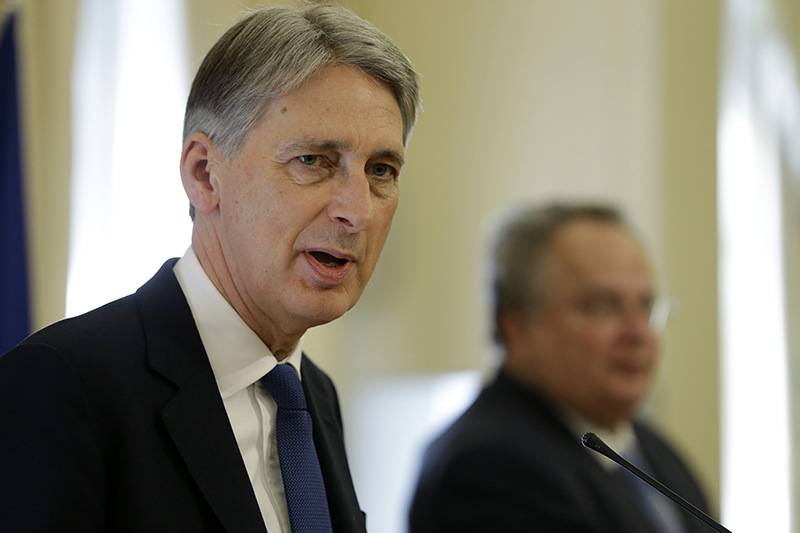 British Foreign Secretary Philip Hammond answers to a question during a news conference with Greece's Nikos Kotzias in Athens, Jan. 14, 2016. (AP Photo)
by Feb 03, 2016 12:00 am
Britain said on Tuesday Russia could be trying to carve out an Alawite mini-state in Syria for its ally President Bashar Assad by bombing his opponents instead of fighting Daesh militants.

Hammond dismissed Russian criticism that he was spreading "dangerous disinformation", saying there was a limit to how long Russia could pose as a promoter of the peace process while bombing Assad's opponents, who the West hopes can shape Syria once the president is gone.

"Is Russia really committed to a peace process or is it using the peace process as a fig leaf to try to deliver some kind of military victory for Assad that creates an Alawite mini state in the northwest of Syria?" Hammond told reporters in Rome.

The comments indicate growing frustration in Western capitals about Putin's intervention, alongside Iran, in Syria but also give a frank insight into the Western assessment of the Kremlin's potential objectives for Syria.

When Russia began air strikes in September, Putin tilted the war in President Assad's favour, after major setbacks earlier in 2015 brought rebel groups close to the coastal heartland of his Alawite sect.

A minority for most of their history, Alawites suddenly cemented their control in Syria in 1970 when Assad's father Hafez staged a coup that sidelined the Sunnis. He built a ferocious security apparatus based on fellow Alawite officers.

Alawites broke away from Shi'ism more than 1,000 years ago and retain some links to it, including the veneration of Ali, the cousin and son-in law of the Prophet Mohammad. Alawi literally means "those who adhere to the teachings of Ali."

The Kremlin says the West is playing with fire by trying to topple Assad and Putin has promised to track down the Daesh militants who downed a Russian airliner in October killing all 224 people aboard.

Russia says it targets a range of militants in Syria, not just Islamic State, although it insists it focuses on Daesh.

"To make such accusations is not logical, it is not correct. It contradicts the essence of those efforts that Russia is making in Syria," Peskov told reporters.

"Russia is making rather massive and consistent efforts to help the Syrians in their fight against international terrorism," Peskov said.

When asked about the Russian criticism, Hammond quipped: "Sounds like I must be pretty much spot on."

Hammond also said Russia was strengthening Daesh on the ground by propping up Assad and bombing his opponents and thus driving moderate Sunnis into the hands of militants.

"There has to be a limit to the amount of time that the Russians can sit at the negotiating table posing as sponsors of the political track while at the same time bombing the people who we believe have to be the future of Syria," he said.

Asked if he thought Russia was guilty of war crimes in Syria, Hammond said: "On the face of it, and you have to investigate these things very carefully, there is indiscriminate bombing of civilian areas going on and, on the face of it, that would represent a breach of international humanitarian law."

A United Nations envoy met Syrian government representatives on Tuesday to try to advance peace talks that have been rendered almost impossible by continued fighting in a conflict that has killed 250,000 people in the past five years and caused a refugee crisis in the region and Europe.