Donald Trump to Syrian refugee children: 'You can't come to the US' 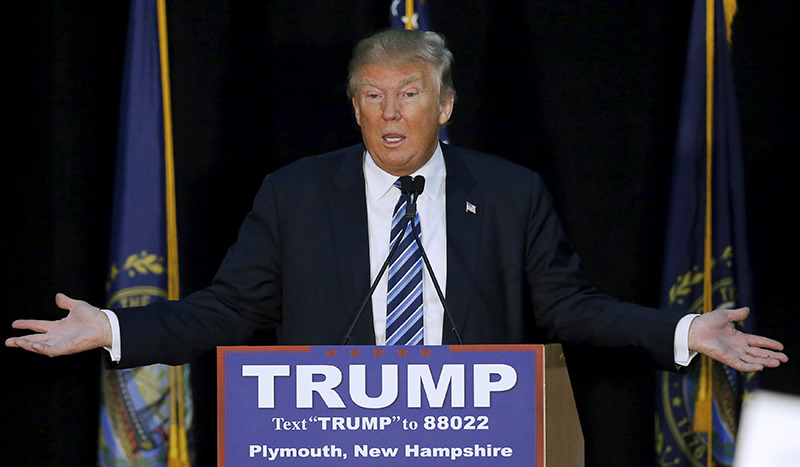 U.S. Republican presidential candidate Donald Trump addresses a campaign rally in Plymouth, New Hampshire February 7, 2016. (REUTERS Photo)
by Daily Sabah Feb 08, 2016 12:00 am
With dozens of children dying every day in the war-torn country of Syria, where the line between life and death is so very thin, a U.S. Republican White House front-runner gave a brusque message to all Syrian new-comers and their children: "You can't come here."

This Republican presidential candidate was no other than the widely-criticized Donald Trump, who made the comments Monday during a town hall in New Hampshire in the U.S.

Trump continued with "We don't know where their parents come from, they have no documentation whatsoever," sparking a roar of applause from the crowd.

During the town hall, a man from the crowd asked Trump if he would be able to look at the Syrian children and say they weren't allowed into the U.S. or attend school here, to which Trump replied with "I can look in their faces and say, 'You can't come here.'"

Trump's comments come after he stated Sunday that he would be open to harsh measures to deal with the threat from Daesh, including going beyond the controversial interrogation tactic known as waterboarding, in other words a form of water torture that makes the interrogee experience the sensation of drowning.

In an interview on ABC's "This Week" program, Trump discussed reviving the tactic and implementing other interrogation techniques, pointing to the recent beheadings of Christians in the Middle East as evidence of the need for stronger interrogation methods for suspected operatives of terrorist groups.

Trump has gone farther than other Republican candidates, even Ben Carson who likened refugees fleeing violence in Syria to "rabid dogs", who called for a suspension of a plan by President Barack Obama to bring into the U.S. as many as 10,000 Syrian refugees fleeing their country's civil war and Daesh militants.

Previously in January, just four weeks away from the opening of 2016 primary contest, Trump out-trumped himself once again as he called for a "total and complete shutdown" of all Muslims entering the U.S. He also called for a wall to be built along the southern border to block out Mexicans which he branded as 'rapists' at his presidency bid launch at Trump Tower in New York in June 2015.

Trump's proposal on Muslims has been condemned by Republicans and Democrats as un-American and counterproductive, yet the hardline approach to immigration has fueled his popularity among the overwhelmingly white Republican primary electorate.

Republicans continue to argue that America needs to up its safety measures against refugees in light of recent terror attacks. They suspect that terrorist groups send their agents under the guise of asylum-seekers. However, Democrats argue that the current system is capable of taking in more refugees as the gradual resettlement process will take more than a year.
Last Update: Feb 09, 2016 5:24 pm
RELATED TOPICS