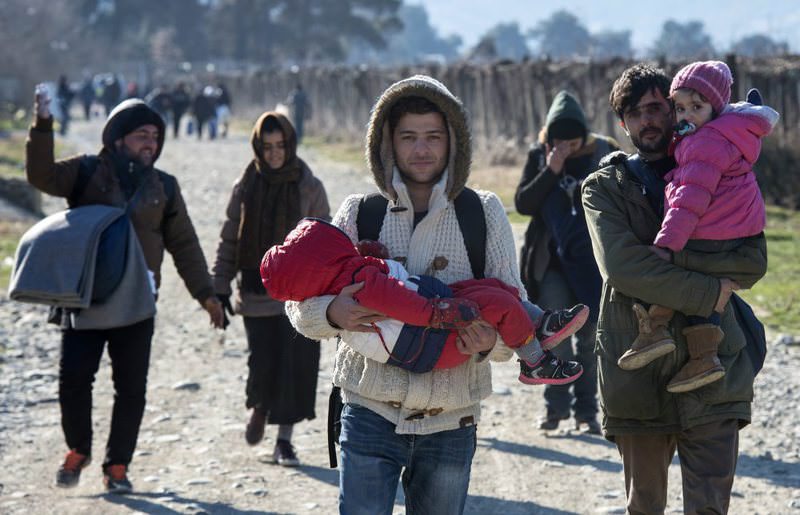 Refugees walk to a transit camp after they crossed the border between Greece and Macedonia near Gevgelija, Macedonia, Feb. 7.
by Daily Sabah with Wires Feb 09, 2016 12:00 am

Refugees continue their perilous journeys to reach Europe despite harsh winter conditions and tighter border checks. The division among EU countries has become more visible over their migrant and refugee policies, and anti-migrant sentiment has been on the rise throughout Europe

Even though winter is bearing down on Europe, tens of thousands of refugees and migrants from the Middle East, Africa and Asia have been desperate enough to embark on the weeks-long journey across the Aegean Sea and along the so-called Balkan migrant corridor where frigid weather and stricter border controls have turned an already tough journey into an even more treacherous one.

Rasul Orwani, one of the lucky migrants who survived the perilous journey across the Mediterranean Sea, thought he had faced the worst after braving the cold, rough seas in a rickety wooden boat to travel to Greece and then the Balkans.

Safe in the Serbian town of Presevo on the Macedonian border, Orwani said there was no turning back. "Our trip is very dangerous and risky," the 20-year-old said. "We crossed the sea, we were in a boat and the waves in the sea could have easily sunk us."

While Europe took in more than 1 million people in 2015, European Union countries have been struggling to limit the biggest migration to the continent since World War II. Some countries along the migrant route have said they want to slow the influx or even completely block it. Some of the nations imposed new, stricter regulations for those transiting toward their ultimate goal: Germany or other rich Western European countries.

As a result, dozens of refugees have been turned back from the borders amid freezing winter temperatures, while others have faced border closures and long hours at registration centers and refugee camps. Experts say the measures are unlikely to stop the flow, but could instead prompt the refugees to again start using illegal routes over razor-wire border fences and through forests, pushing them into the hands of ruthless smugglers.

Aid groups say migrants and refugees passing through the Balkans have faced difficulty traveling in the snow and ice, and there has been a surge in cold-related illnesses. Women, children and babies, in particular, are in danger of hypothermia, according to Save the Children. It said migrants have been arriving in Serbia with blue lips, distressed and shaking from the cold. Exhausted mothers have told the group's aid workers they are unable to keep their babies warm and dry, and are stumbling while carrying them on the icy roads.

Most refugees are not used to winter conditions, and many set off from home countries without warm clothing. Mirjana Milenkovski, the spokeswoman for the United Nations Refugee Agency in Serbia, said refugees are being provided heated shelter, bus transfers, warm drinks and clothes as they pass through Serbia and other countries. From Serbia, migrants pack trains and buses to get to Serbia's border with Croatia. There, they again wait in refugee centers to head to a registration center in Croatia, where authorities go through the lists and check their refugee papers. From Croatia, migrants go on to Slovenia and after more registration and checkups, they move on to Austria and then Germany. Dozens drop out along the way, with authorities in each of the countries conducting their own selection procedures.

The International Organization for Migration (IOM) said 368 people died trying to cross the Mediterranean Sea in January, nearly one in six of them children, as minors make up a growing percentage of those making the treacherous trip. As Orwani made it to the Greek shores last month, dozens of others were not so lucky. Two other unseaworthy boats carrying migrants and refugees sank, killing 46 people, many of them children. The tragedy highlights the plight of people ready to risk their own lives and those of their children to start a new life somewhere free of war and poverty.

Macedonia, Serbia, Croatia and Slovenia first said they were letting in only people from war-ravaged Syria, Afghanistan and Iraq. New restrictions were imposed in January with only those seeking asylum in Germany or Austria being let through. This means all others are sent back from the borders, where they often seek smugglers' help to continue through clandestine routes.

Macedonia has recently started periodically closing its border with Greece, leaving thousands of desperate migrants and refugees stranded for days in a makeshift camp without any official word when they could continue their journey.

In addition, anti-immigration sentiment has been on the rise throughout Europe since the terror attacks in Paris in November and the New Year's Eve assaults on women in Cologne, Germany. Austria said it will take 37,500 refugees this year and a total of 127,500 through 2019. Small countries like Slovenia have urged immediate EU action to control the flow or even stop it completely on the Greek-Macedonian border before the expected spring surge of asylum seekers when the weather gets warmer.

At the Presevo refugee center, Orwani was waiting patiently for his turn to register. He said he wanted to go to Germany, which means he might be allowed through since he is from Afghanistan. After crossing the Aegean Sea, Orwani said nothing else can be nearly as hard.

The U.N. refugee agency said on Sunday that more than 68,000 people have crossed the Aegean Sea to Greece so far this year. Meanwhile, last week, two migrants froze to death after being abandoned by traffickers in southeastern Bulgaria. The turmoil in the Middle East and the five-year-long civil war in Syria have led many people to flee the conflict in an attempt to seek security and shelter in a more prosperous and peaceful country, such as one in Europe. However, Europe has been severely criticized for lacking a collaborative response to the crisis.
Last Update: Feb 09, 2016 1:01 am
RELATED TOPICS