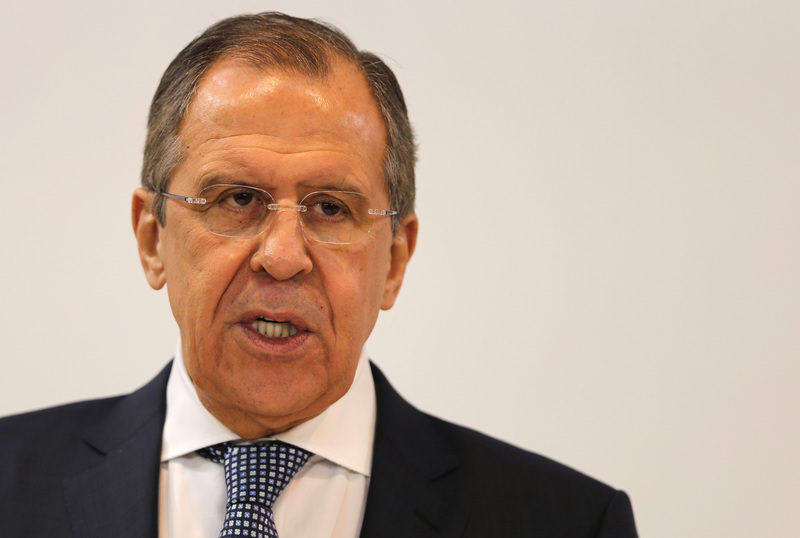 by Daily Sabah Feb 10, 2016 12:00 am
Russia's foreign minister Sergey Lavrov said in an interview with the daily Moskovsky Komsomolets published Tuesday that Moscow had presented Washington with new proposals that are 'concrete', specific and simple, to end Syria's civil war, but did not provide further details.

Lavrov stated in the interview that the plan did not involve Assad's ouster and that Washington was studying the proposal. He added that he expected to hear from the U.S. very soon.

Lavrov also shrugged off criticism that Russia had contributed to the collapse of peace talks in Geneva last week by providing air cover for a Syrian regime advance north of Aleppo.

Lavrov will meet with U.S. Secretary of State John Kerry on Thursday in Munich.

Russian activities in Syria are making it difficult to hold peace talks on ending the Syrian conflict, Secretary of State John Kerry said earlier on Tuesday, calling on Moscow to join efforts to bring about an immediate ceasefire.

"Russia's activities from Aleppo and in the region are making it much more difficult to be able to come to the table and be able to have a serious conversation," Kerry told reporters.

The U.S.' stance on the issue has been quite direct; many times reiterating that neither the U.S. nor its allies in the anti-Daesh coalition will accept a solution with Assad. Within the same lines, U.S. State Dept. spokesman John Kirby had said Monday: "Unless we can get to a ceasefire that everybody has signed up to, and humanitarian access to the areas everybody has agreed needs it, then the conflict will be prolonged."

"All the sides involved in the Syrian crisis became aware that there would be no quick fall of the regime of Bashar Assad. Many of those who earlier counted on the military solution have realized that now this will hardly happen," the ambassador said.

The diplomat also said Syrian people were tired of the long-lasting crisis and wanted an end to violence and resume to their normal lives.

Stressing that Russia and Syria have similar approaches on what groups in Syria could be considered terrorists, the diplomat said that the two countries' views coincide in many ways.

Last month, President Erdoğan had stated that Russia was not fighting Daesh and wanted to form 'a boutique state in Syria' for the Moscow ally Bashar Assad.

"Is Russia really committed to a peace process or is it using the peace process as a fig leaf to try to deliver some kind of military victory for Assad that creates an Alawite mini state in the northwest of Syria?" Hammond had told reporters while saying there was a limit to how long Russia could pose as a promoter of the peace process while bombing Assad's opponents, who the West hopes can shape Syria once the president is gone.

Russia is a close ally of Syria's Bashar Assad and has been waging an air campaign on its behalf since Sept. 30.

Thousands of Syrians have fled from the northern Syrian town towards the Turkish border in recent days, as fighting in the region intensified.