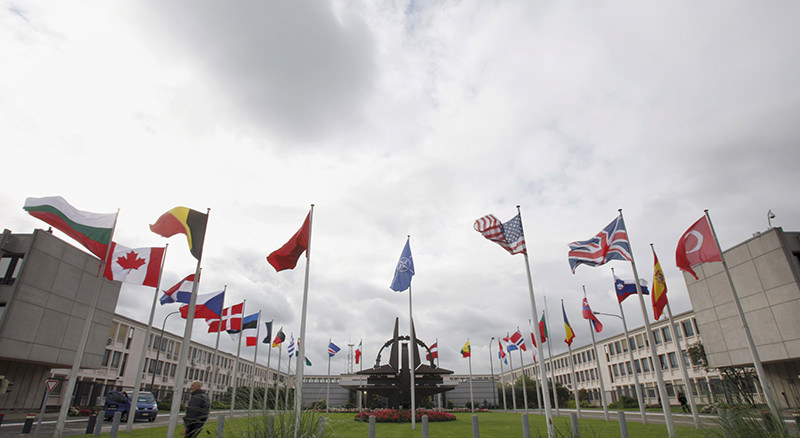 Flags of the NATO allies wave in the wind outside NATO headquarters in Brussels on Wednesday, Oct. 5, 2011. (AP Photo)
by Feb 11, 2016 12:00 am
NATO is considering joining the U.S.-led coalition fighting Daesh extremists in Syria and Iraq, U.S. Defense Secretary Ashton Carter said Thursday.

"Thanks to the leadership of NATO (head) Jens Stoltenberg we are exploring the possibility of NATO joining the coalition as a member itself," Carter said after a meeting of the coalition in Brussels.

Carter also stated that the NATO is preparing to train Iraqi Security Forces in Jordan, starting from next month.

The coalition already includes all 28 NATO member states individually, but not the alliance in its own right.

Some NATO member states have been wary of the alliance becoming directly involved in the Daesh campaign but the threat it poses, with some of its leadership moving to Libya and closer to Europe, has increased the pressure for change.

Speaking after the meeting at NATO HQ in Brussels, Carter said getting the alliance on board would be a "significant development."

"I look forward to discussing NATO's appropriate role with fellow NATO allies in the days and weeks ahead," he added.

Stoltenberg has repeatedly said in the past that NATO supports the efforts of its member states in the fight against Daesh but has also stressed that the alliance had no direct role in the Syria and Iraq conflicts.

Earlier Thursday, NATO defence ministers agreed "in principle" to a U.S. request to deploy its AWACS surveillance aircraft so as to free up U.S. planes which would then be deployed against Daesh.

The NATO aircraft would not be directly involved, instead filling in for U.S. planes that would be re-tasked to gather Daesh intelligence over Iraq and Syria.

Announcing that agreement, Stoltenberg said the decision "will increase the ability of the coalition to degrade and destroy the terrorist group."
Last Update: Feb 11, 2016 8:44 pm
RELATED TOPICS