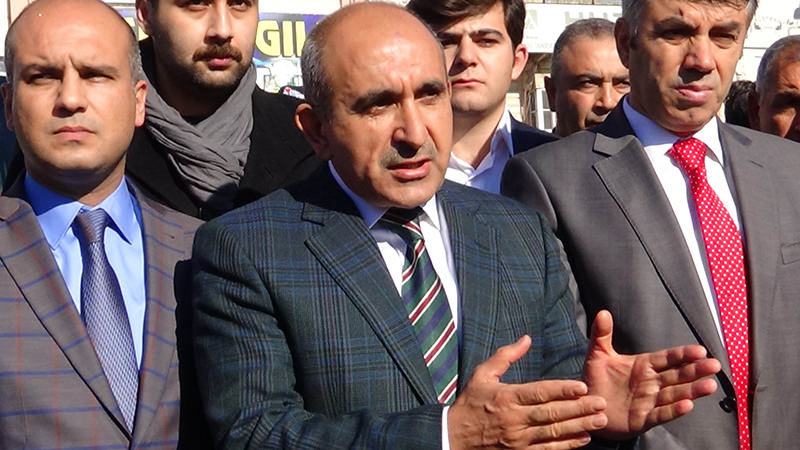 Mayor of southern border province Kilis, Hasan Kara. (AA Photo)
by Daily Sabah Feb 11, 2016 12:00 am
As the UN demands Turkey, the host of over 2.6 million refugees, to open its borders to Syrians, the mayor of southern Kilis province made an interesting offer to Europe on the issue.

Speaking at CNN Turk's Günlük (Daily) program on Wednesday, Mayor Hasan Kara said "Ok, we will open our borders. In fact, we can open both our Edirne [western-most] and Öncüpınar [southern-most] border gates so Syrians can proceed right into the heart of Europe. I'll even pay for their travelling expenses."

Criticizing the UN's 'open borders' call , Kara said that, as the province of Kilis, residents did their utmost to help the refugees and well exceeded their capacity to reach out to those in need.

Reminding the UN that with a population of 129,000, Kilis was home to 120,000 Syrian refugees –nearly the same amount of refugees as inhabitants -, Kara underlined that the city is exemplary and one-of-a-kind in the world in terms of reaching out to refugees.

With the number of Syrians waiting at the border increases everyday as a new wave of refugees are forced to leave their homeland due to the aggravation of the Syrian conflict, Turkey continues to keep its doors open to those in need -despite the heavy costs.

Speaking at a joint press conference with his Dutch counterpart Mark Rutte in The Hague on Wednesday, PM Davutoğlu said that Turkey has always kept its border open to the Syrians fleeing the attacks.

"Our border, hearts, and doors are open to Syrians," Davutoğlu said while he slammed the countries and the United Nations Security Council criticizing Turkey for the current situation for remaining silent to the Russian attacks.

The United Nations High Commissioner for Refugees (UNHCR) on Tuesday had called on Turkey to open its Syria border for the new influx of refugees trying to escape the town of Aleppo after fresh Assad regime and Russian airstrikes.

Kilis, a city located some 10 kilometers from the Syrian border, was naturally one of the first destinations for tens of thousands of Syrians leaving their homeland wrecked by an ongoing civil war. The small city on the border with Syria, was nominated for the Nobel Peace Prize for embracing at least 120,000 Syrian refugees. Ayhan Sefer Üstün, a lawmaker from the Justice and Development Party (AK Party) where he serves as a deputy chairman, had nominated Kilis on Feb 7 to make the city's exemplary treatment of refugees heard around the World.

Turkey is home to more than 2.5 million refugees from Syria, making it the host of the largest displaced Syrian population in the world, as the country to the north of Syria is the nearest destination for millions fleeing the war. Only a small fraction of them – 269,672 according to the Prime Ministry's Disaster and Emergency Management Authority (AFAD) – live in refugee camps while others live on their own in cities all across the country, from border cities like Kilis to Istanbul in the northwest. Turkey has been praised for its hospitality toward refugees, especially for state-of-the-art refugee camps and continuous humanitarian aid to the refugees. The country has spent at least $8 billion for refugees since the conflict began in 2011 and nationwide aid campaigns to help Syrians both in Turkey or internally displaced in Syria garner billions of Turkish liras. Save for a few isolated cases of unrest a few years ago in cities heavily populated with refugees, Syrians in the country have not faced any acts of intolerance.