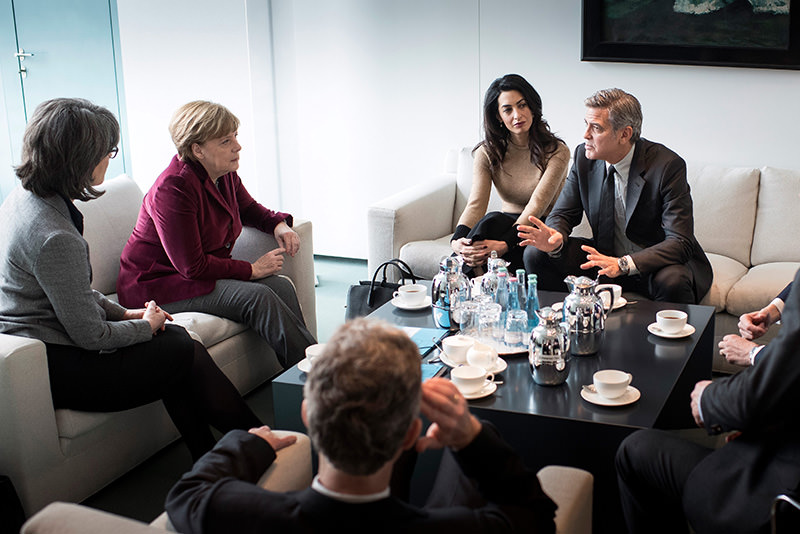 The meeting in Merkel's Berlin office lasted about one hour. No details of the talks were released.

Clooney had Thursday indicated that he would talk to the German leader about how he could help and what he could do in connection with the migration crisis.

Merkel's handling of refugee policy, which followed her decision in September to open Germany's borders to refugees mainly fleeing wars in the Middle East and Africa, has sparked political tensions in Europe's biggest economy.

Some 1.1 million migrants and refugees entered Germany in 2015.

At the opening of the Berlin Film Festival on Thursday, when Clooney was asked his view on the chancellor's refugee policy, he said: "I absolutely agree with it."

The 54-year-old actor - who is hugely popular in Germany and a well-known activist for humanitarian causes - was at the Berlinale for the launch of his latest film, Hail, Caesar!, in which he plays a dimwitted actor.

The movie from Oscar-winning US directors Joel and Ethan Coen launched the 66th Berlinale at Thursday's gala ceremony.

But underlining the importance to Clooney of his involvement in political causes, he hit back at a questioner who asked him at Thursday's press conference what he was doing to help out with the refugee crisis.

After joking around with the directors and the film's cast, the Clooney charm offensive quickly vanished and he turned the question back on the questioner asking: "What are you doing about it?"

"I spend a lot of my time working on these things, and it's an odd thing to have someone stand up and ask, 'What are you doing about it?'," he said.

He went on to say: "I have been to a lot of dangerous places and had meetings with refugees."

Clooney said he wanted to make a film about Darfur, the western Sudanese region, but had still not found the right script.

It was a problem for filmmakers in producing movies about current global crises is the amount of time it takes to produce a film, he added.

Long a humanitarian and political activist, Clooney condemned the Iraq war, campaigned against genocide in Darfur, Sudan, endorsed US President Barack Obama, and raised millions of dollars for victims of the 2010 Haiti earthquake.

"The unfortunate thing about film community is we react to situations much more than we lead the way," he said.

"Things happen, scripts are written, and it takes a couple of years before people are actually making films," he said.