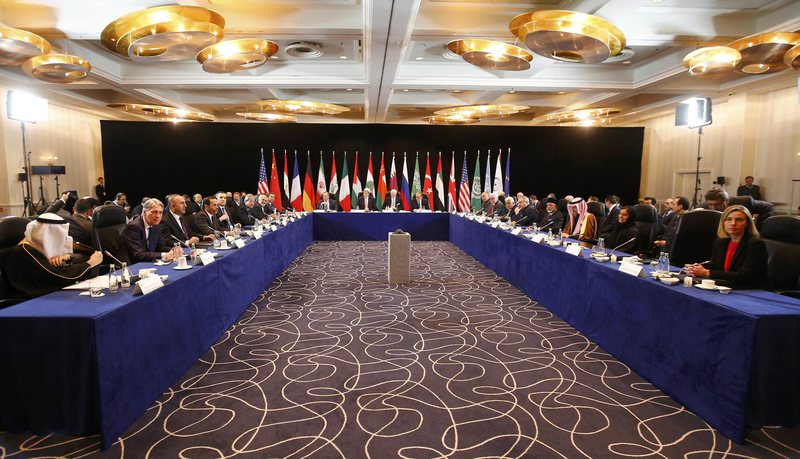 by Anadolu Agency Feb 12, 2016 12:00 am
Syria's main opposition on Friday cautiously welcomed an agreement to take steps towards the suspension of fighting to allow humanitarian aid to reach starving civilians.

Salim al-Muslat, spokesman for the High Negotiations Committee, demanded concrete steps from Russia and the Syrian regime to stop attacks on civilians within a week.

"I believe we should really wait a few days to see if they stick to their promises, especially Russia," he told Anadolu Agency at a conference of world and regional powers in Munich.

Muslat said a joint statement after the talks on Thursday included "important and positive points" but voiced reservations about implementation.

"If they are implemented on the ground, I believe this would really save lives there, this would push for the success of the political process," he said.

"If they are really keen and serious to implement this, I believe we will move forward towards accomplishing political transition in Syria."

The meeting of foreign ministers from the International Syria Support Group ended with an agreement on the "cessation of hostilities" within a week and the provision of immediate humanitarian aid to besieged towns and villages.

However, the suspension of fighting falls short of a cease-fire - one of the conditions of the 2012 Geneva communique that outlines a roadmap towards a political solution in Syria.

"With Assad in power and with these militias there, you cannot really talk about cease-fire," Muslat said.

"But we want this temporary cessation of hostilities for the relief of our people because it is difficult for our people to see children starve to death, civilians targeted by Russian airstrikes. It is very difficult for us to see those detainees, those women and children in the jails of Assad."

The deal is tinged by skepticism over Russia's motives and Muslat echoed those concerns.

"We trust our friends and we believe what they said," he told Anadolu Agency. "But the big issue is can we trust Russia? This is really a problem. Our friends should put pressure to make this action become real on the ground."

Russia has been carrying out airstrikes to support a Syrian government offensive in Aleppo province that has targeted both the moderate opposition and civilians. "Russia came to Syria pretending that they are fighting terrorism," Muslat said. "In fact they target civilians, they target infrastructure, schools, hospitals and children."

"Five percent of these airstrikes target Daesh. The rest, 95 percent, targets civilians. Seventy percent of civilian casualties were [caused] by the Russian airstrikes. I believe we should see an end to this."

On Thursday, Russian Foreign Minister Sergey Lavrov supported the call for a cessation of hostilities within a week but also stressed that his country would continue airstrikes in Syria.

"The cease-fire will not be extended to ISIL, Jabhat al-Nusra and other affiliated organizations that have been recognized as terrorist organization by the UN Security Council decision," he said, referring to Daesh and al-Qaeda's affiliate in Syria.

Muslat said humanitarian aid should be sent Saturday. "This will help a lot but we will wait and see," he said, adding that the delivery of aid could pave the way for the renewal of UN-brokered talks between the opposition and the government in Geneva, which were suspended due to the regime offensive in Aleppo.

"As soon as we see bread goes to those children there and we see women getting out of the jails of Assad, we are in Geneva," he said.
Last Update: Feb 12, 2016 9:33 pm
RELATED TOPICS