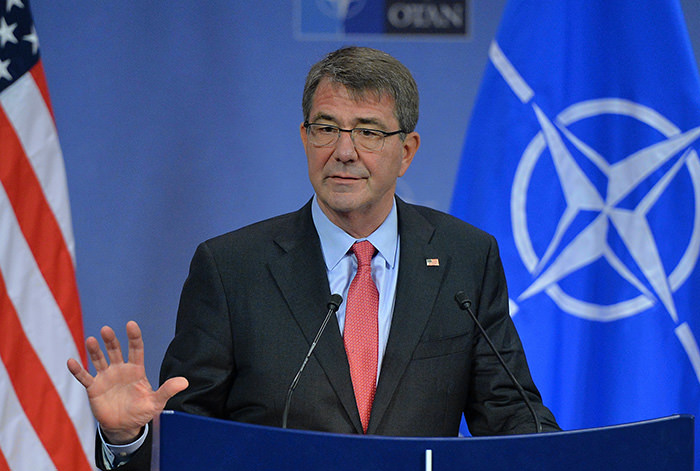 Carter made the comment after meeting Friday at his Brussels hotel with his counterpart from the United Arab Emirates.

Carter declined to say how many Emirati special forces would go to Syria. He said they would be part of an effort led by the United States and bolstered by Saudi special forces to train and enable local Arab fighters who are motivated to recapture Raqqa.

The U.S. war plan for fighting the Daesh in Syria and Iraq is designed to unseat the extremists in Raqqa and Mosul, which is the group's main stronghold in northern Iraq.

Carter also told reporters that however the proposed suspension of Syrian civil war hostilities is implemented, as announced in Munich, the U.S. will continue combating IS in Syria.

"There is no cease-fire in the war against ISIL [Daesh]," Carter said. "Let's be clear about that."

Diplomats meeting in Munich, Germany fell short early Friday in organizing a truce in the Syrian civil war but agreed to try to work out details and implement a temporary "cessation of hostilities" in a week's time. The foreign ministers from the International Syria Support Group managed to seal an agreement to "accelerate and expand" deliveries of humanitarian aid to besieged Syrian communities beginning this week.

Carter said the US military will not participate in those aid deliveries.

U.S. and Russia are to lead a working group meeting Friday to work out aid delivery details.

Five years of conflict have killed more than a quarter-million people, created Europe's biggest refugee crisis since World War II and allowed Daesh to carve out its own territory across parts of Syria and neighboring Iraq.

Overall, the United Nations says almost half a million people are besieged in Syria. Since the beginning of 2015, Syria's government had approved just 13 inter-agency aid convoys, out of 113 requested, the U.N. reported last month.
Last Update: Feb 12, 2016 4:06 pm
RELATED TOPICS