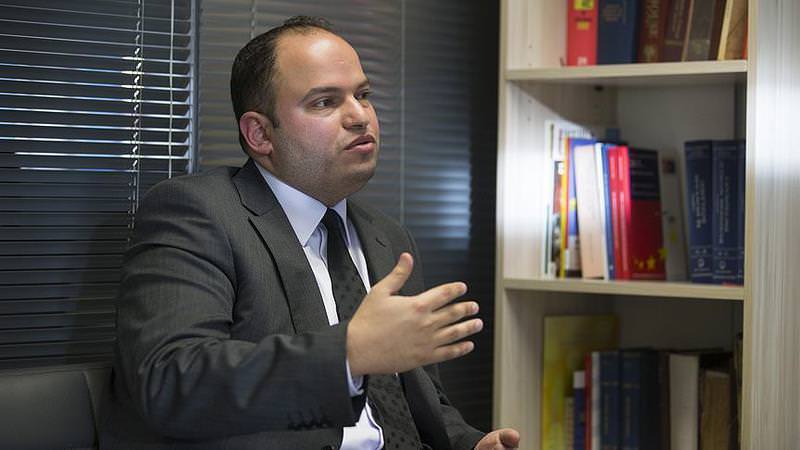 by Anadolu Agency Feb 15, 2016 12:00 am
Mohamed Qassim, who formerly served as attorney-general in Syria's central city of Tadmur, spoke to Anadolu Agency on Saturday about collusion, which he says he witnessed first-hand between the Assad regime and its ally Russia and the Daesh terrorist group.

Qassim, who now supports the Syrian opposition forces battling the Assad regime, said the latter had paved the way for Daesh's capture of the ancient city in mid-2015.

"I was a witness to the relationship between the Syrian regime and Daesh," Qassim, who was appointed attorney-general of Tadmur in 2013, said.

In his capacity as attorney-general, Qassim said he had been in contact with Syrian officers and officials in the city.

"This gave me insight into the mutual cooperation and trade between Daesh and the regime," he said.

The former attorney-general said he was once told by the city's intelligence chief, Mazen Abdel-Latif, that regime agents had managed to infiltrate Daesh.

"These agents are in contact with [the regime]; they are conveying information to us about the militant group," Qassim quoted Abdel-Latif as having said at one point.

Citing the local intelligence chief, Qassim said that regime agents had also sought to carry out terrorist attacks inside Turkey.

"[Abdel-Latif said] Turkey would pay a price for its intervention in Syria and would be hurt by terrorism and that Europe and France would also pay dearly," Qassim said.

Since then, more than 250,000 people have been killed and more than 10 million displaced, according to figures released by the U.N.

Qassim recalled the fall of Tadmur to Daesh militants in May of last year.

"A month before the city fell to Daesh, we had received information that Daesh was planning to attack Tadmur and the adjacent city of Sukhna. We conveyed the information to Assad himself," he said.

"But instead of laying out a plan to defend the city, Assad ordered military forces to vacate Tadmur in hopes of tempting Daesh to fill the vacuum," he added.

Qassim went on to say that Assad's aim was to encourage Daesh to advance on Syria's western Qalamoun region where it would confront the opposition Jaysh al-Islam ("Army of Islam") group.

"He wanted to see the two groups destroy each other," the former official contended.

According to Qassim, Assad had wanted to give the impression that Daesh had captured Tadmur, from which the group hoped to advance on the central city of Homs to kill Alawites and Christians.

"[Assad was confident] that the destruction of ancient monuments in the city would anger world public opinion and thus demonize the revolution," he said.

When he was serving as the city's attorney-general, Qassim said, he had discovered scores of bodies of political detainees in regime-run prisons.

"These people's crime was to oppose the criminal Assad regime," he said.

Qassim added that political detainees had been subject to horrific forms of torture.

"Many were beaten, burnt, tortured or crucified to death," he said.

"[Upon the death of a detainee] I was summoned, along with the medical examiner, to examine the body and we were forced to write reports that he died of natural causes," said Qassim.

The former attorney-general also accused the Assad regime and its ally, Russia, of committing atrocities in Tadmur.

"There were atrocities and crimes committed by Russia and the Assad regime that the world never knew about," he said.

He asserted that most of the city's monuments, for example, had been destroyed by Russian airstrikes or barrel bombs dropped by regime aircraft.

"Russian bombardments and regime [attacks] don't target Daesh; rather, they are killing civilians, rendering thousands of the city's residents homeless," he said.

Qassim went on to note that Russia, which began striking opposition forces in Syria last September, never attempted to retake Tadmur from Daesh.

"It's destroying the city and killing its people and is ultimately working to obliterate Tadmur," he said.

Qassim said dozens of Russian military experts had arrived in Tadmur when he was still serving as the city's attorney-general.

"These experts visited oil and gas fields to carry out maintenance and repair operations under the protection of Daesh militants," he said.

"This proves Russia was helping Daesh maintain the flow of oil and gas from areas under its control to regime-controlled areas," he said.

Qassim added that the Assad regime, through middlemen, was conducting trade operations with Daesh.

"The regime was working through mediators to purchase oil and conduct trade operations with Daesh in Tadmur and its surroundings," he said.

"He [Gaber] smuggled weapons at night to Daesh militants and was paid by middlemen," he said.

Providing a glimpse as to how the weapons were procured by Daesh, Qassim said Gaber used to order extra weapons at one of the army checkpoints under his control.

"[Shortly afterward] Daesh militants would attack the checkpoint, from which Gaber would order his troops to withdraw, leaving the weapons to the militants," he said.

"After the militants withdrew from the checkpoint, Gaber and his forces would return to find it emptied of weapons," Qassim said.

Asked about the illicit trafficking of ancient artifacts in Syria, Qassim said the practice had been widespread even before the outbreak of the revolution.

"This has been happening for more than ten years," he said, going on to name Sabra al-Khazen, head of military intelligence in Tadmur, as one of the country's best-known antiquities smugglers.

"He [al-Khazen] amassed thousands of ancient artifacts and sold them to buyers abroad. He shared his profits with Assad and other members of the intelligence apparatus," Qassim said.

He added that numerous military officers and security personnel had engaged in smuggling and the selling of artifacts amid the chaos that followed the revolution.

"Some traffickers were arrested," Qassim said, noting that he himself had been approached by certain security chiefs who had attempted to undermine investigations and destroy evidence of illegal antiquities smuggling.

Asked about reports that the regime had released prisoners and allowed them to join Daesh, Qassim confirmed that many prison inmates had been freed.

"I heard these inmates had gone to Al-Raqqah [in northeastern Syria] and to other Daesh-held areas without being referred to the judiciary," he said.

"I gradually realized the intelligence agencies were recruiting them, especially criminals, with a view to using them to infiltrate Daesh," Qassim said.

"I was a witness to the peacefulness of the Syrian revolution; I saw how peaceful protesters were killed by [regime forces] in Homs," he said.

The former attorney-general went on to assert that Syria had since become "one big prison".

"There is panic and fear everywhere," he said.

According to Qassim, the Assad regime had been on the verge of collapse before Russia had intervened in the conflict.

"The Russian aggression provided the regime with moral support," he said. "This support, however, remains very fragile."

Qassim stressed that all Syrians, Sunnis and Alawites alike, despised Assad and his regime.

"All are confident that he will either escape or be killed," he said. "Everyone knows Assad is doomed to defeat."
Last Update: Feb 15, 2016 2:48 pm
RELATED TOPICS