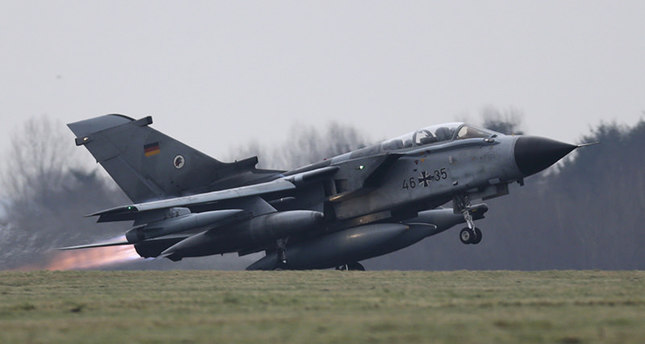 A German air force Tornado jet takes off from the German army Bundeswehr airbase in Jagel, northern Germany December 10, 2015 (REUTERS Photo)
by Daily Sabah Feb 16, 2016 12:00 am
German Lieutenant general Joachim Wundrak has said that German Tornados deployed to Syria to fight against Daesh have been accompanied and 'shadowed' by Russian fighter jets as if to show the 'Assad-ally's presence', Rheinische Post reported Monday.

Speaking to the German daily, Wundrak stated that German reconnaissance aircrafts were 'never alone' in the Syrian sky and that Russian SU-35 jets had been shadowing the Tornados since the beginning of the U.S.-led anti-Daesh coalition campaign in Syria.

Pointing out that the Syrian regime has procured new jets and helicopters from Russia, Wundrak added that Russia's 'stalking' was to show its presence as an ally/invitee of Syria's Bashar Assad.

However the German commander stated that no incidents had occurred so far and the German Tornadoes were neither targeted nor forced out of Syrian air space.

A 'red phone' emergency hotline that connects the U.S. and Russian high commands was also established so that there were no 'collisions' in the operations, the general further added.

Wundrak, who is also the Executive Director of the NATO Joint Air Power Competence Centre, reported that the Tornado jets carried out 88 reconnaissance missions.

Germany deployed six aircraft to Syria which are fitted with surveillance technology, and had been touted as being capable of taking high-resolution photos and infrared images, even at night and in bad weather.