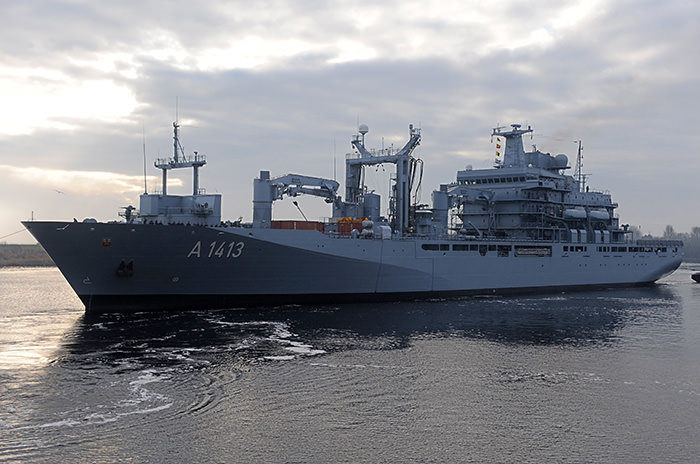 In this Jan. 14, 2014 file picture the supply ship Bonn leaves the German navy base Wilhelmshaven , Germany (AP Photo)
by Feb 19, 2016 12:00 am
NATO vessels have arrived in the Aegean Sea to start monitoring the migration route between Turkey and Greece, a NATO official told German Press Agency (DPA) on Friday, as the military alliance prepares to help gather information on smuggling networks.

The short sea passage has been the main crossing point for asylum seekers heading to Europe, but has claimed several hundred lives this year already.

Europe has been struggling to deal with a surge in migration that saw more than 1 million people arrive in 2015. Many are fleeing the war in Syria, but economic migrants have also joined their ranks.

Four vessels under German command, including personnel from Canada, Greece and Turkey, have arrived in Aegean international waters and are conducting "routine reconnaissance, monitoring and surveillance activities," a NATO official said Friday. The ships were rerouted from another part of the Mediterranean Sea.

The ultimate aim is to feed information to the national authorities in Greece and Turkey, in cooperation with the European Union's border agency FRONTEX, focusing on human trafficking and criminal networks fueling the migration crisis.

The full details of the mission are still being finalized.

"This is not about stopping or pushing back refugee boats," NATO Secretary General Jens Stoltenberg said last week.

But any refugees in distress who are rescued by NATO vessels will be returned to Turkey, sending a "clear signal to the smuggling gangs," German Defence Minister Ursula von der Leyen has said.

Tsipras reportedly caused irritation in Brussels by seeking guarantees on the migration crisis as a condition for his endorsement of a reform deal for Britain that was also being negotiated at the summit on Friday.

Greece has come under pressure from the EU to ratchet up the control of its sea frontiers, as nations further along the migration route to northern Europe are closing up their borders - prompting fears in Athens that thousands of refugees will be stranded in its country.

Tsipras demanded in his meeting with Hollande and Merkel that the other EU member states refrain from unilateral border closures at least until March 6, government sources in Athens said on condition of anonymity.

Hollande and Merkel assured Greece that it would get "every support that it needs," the sources said.

Tensions have been rising in the EU since Austria decided to limit the number of asylum seekers it would let in, setting off fears that other countries upstream on the so-called Balkan migration route will become backed up.

Balkan nations are already following Austria's cue for heightened border security, with plans to stop refugees at their own frontiers.

Hungary will seal the three railway crossings it shares with Croatia starting February 21, "in the interest of public security," media reports said Friday. The measure will be in effect for 30 days.

Hungary was on the path of refugees arriving through Serbia and Croatia until it sealed its borders with the two countries in September and October.
Last Update: Feb 19, 2016 5:28 pm
RELATED TOPICS