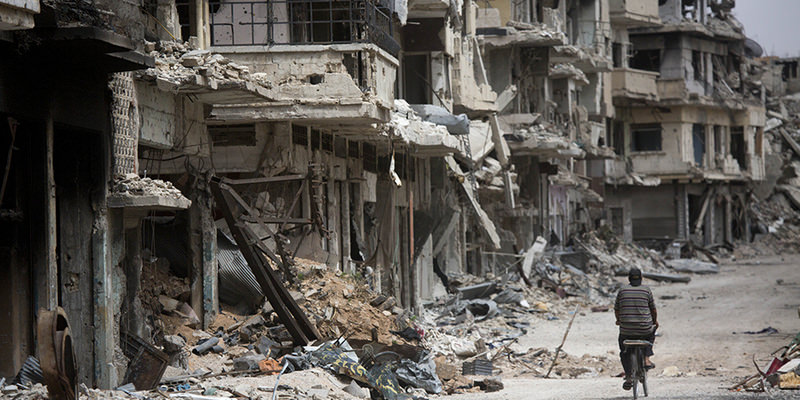 The conflict in Syria is the greatest displaced crisis of our generation. (REUTERS Photo)
by Compiled from Wire Services Feb 22, 2016 12:00 am
The United States and Russia announced plans on Monday for a cessation of hostilities in Syria, excluding Daesh and Nusra Front militants, that would take effect starting on Saturday.

Parties to the hostilities would indicate their agreement by midday (12 p.m.) on Friday Damascus time, and the cessation of hostilities would go into effect at midnight, the two nations said in a joint statement issued by the U.S. State Department.

Officials earlier had said that the two sides had agreed on the terms and conditions for the "cessation of hostilities."

The formal announcement came after Presidents Barack Obama and Vladimir Putin spoke on the matter by telephone.

The announcement is expected to cap weeks of diplomacy that intensified in the past few days, aimed at reaching a temporary truce that would allow the parties to return to the negotiating table in Geneva. A first round of indirect talks collapsed rapidly last month after the government launched a massive offensive backed by Russian airstrikes in the northern province of Aleppo, near the Turkish border.

Residents of the Syrian capital earlier Monday expressed skepticism about talk of a "provisional agreement" for a truce, a day after a wave of Daesh bombings killed about 130 people in government-held areas near Damascus and another city.

Details of the tentative cease-fire between the government and insurgents, announced in Jordan on Sunday by U.S. Secretary of State John Kerry, have not been made public. Even if a truce were to take hold, Daesh would not be a party to it.

The Russian Foreign Ministry put out a statement earlier Monday saying that Foreign Minister Sergey Lavrov and Kerry spoke two more times by telephone on Sunday and agreed on the parameters for the cease-fire.

The statement said those parameters were then reported to Putin and Obama. No further details were immediately available.

The U.N.'s special envoy for Syria, Staffan de Mistura, told The Associated Press on Monday that this week is shaping up as "crucial" for diplomatic efforts to help end the fighting, though he declined to provide details of the negotiations.

Sunday's blasts that ripped through the Sayyida Zeinab suburb of Damascus and the central city of Homs were among the deadliest bombings in government-held areas in Syria's devastating civil war.

Daesh claimed both attacks. The extremists are dug in on the outskirts of the two cities and have repeatedly targeted pro-government strongholds.

De Mistura condemned the bombings and said it suggested the group is feeling "cornered" amid an intensified diplomatic push to end the five-year war. The U.S. also condemned the "barbaric terrorist attacks."

On Monday, the Kremlin announced that Putin spoke with the emir of Qatar, a key supporter of the rebels fighting to topple Assad. The two sides agreed "to intensify bilateral contacts at various levels to facilitate the settlement of the crisis," the statement said. Putin also discussed Syria with King Salman of Saudi Arabia, another leading backer of the rebels, in a phone conversation on Friday.

Syrian officials said the government was ready to take part in a truce as long as it is not used by militants to reinforce their positions. Russia is currently flying a bombing campaign in Syria to support forces loyal to its ally Bashar Assad in the northern Aleppo province and is trying to seal the border with Turkey, before any truce is reached.

Meanwhile, the Syrian government's supply route by land to the city of Aleppo was cut by heavy fighting Monday as the army, supported by allied militias and the Russian air force, fought to consolidate its recent gains in the northern province.

The Britain-based Syrian Observatory for Human Rights, which relies on a network of contacts to monitor the war, said militias assaulted government-held positions around Khanaser, a town southeast of Aleppo, setting off intense clashes that have lasted through the day. Khanaser lies along the government's only access route to the city.

Fighting has been fierce in Aleppo province in recent weeks amid a government offensive to cut off the opposition's strongholds.

Among the youth sitting around the Syrian capital's landmark Omayyad mosque, at the entrance of the old souks, few wanted to talk politics.

Those who did expressed their wariness of a political solution after several rounds of unsuccessful peace talks. "It's good for the Syrians to stop fighting but it will not happen, said Awuj Aqeel, a student.