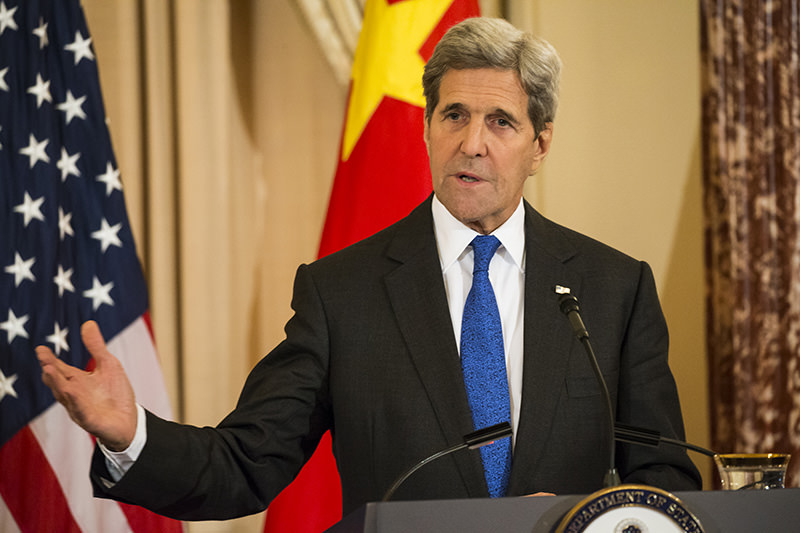 | AA photo
by Anadolu Agency Feb 24, 2016 12:00 am
Secretary of State John Kerry on Tuesday warned that Syria could fail to be a unified country if a planned cessation of hostilities does not successfully pause the country's five-year conflict.

"It may be too late to keep it as a whole Syria if we wait much longer," Kerry said in congressional testimony before the Senate Foreign Relations Committee.

But he did not advocate a partition of the country. Just days before the cessation of hostilities goes into effect at midnight Friday, the top diplomat acknowledged that he wasn't confident of its success.

"I'm not going to say this process is sure to work because I don't know," Kerry said.

That sentiment is also held by Kerry's Pentagon counterpart, Ashton Carter. "I think there's a certain dose of skepticism, and again, the secretary will be watching like everyone else to see whether or not Russia complies with this agreement, whether others comply as well," spokesman Peter Cook told reporters.

Still, Kerry insisted that the tentative halt to hostilities be given ample time to play out.

"This is a moment to try to see whether or not we can make this work," he said, "not to find ways to preordain its failure and start talking about all the downsides of what we might do afterward."

The area north of Aleppo where Syrian government forces and the YPG have advanced on Syrian rebel positions will be a critical test for the nascent agreement, President Barack Obama's Syria envoy said.

"If the cessation of hostilities is to take root and hold, we should see a serious de-escalation of violence there," Brett McGurk said during a special White House briefing.

A prior attempt to halt the ongoing violence that was brokered on Feb. 11 came and went without any break in hostilities.

Negotiated by regional and world powers, the deal called for the resumption of humanitarian aid deliveries to areas of the country that have been besieged by government and opposition forces.

So far, aid has reached five besieged areas, and progress is continuing on a sixth location, according to the State Department.

"Humanitarian assistance to these besieged areas and to all Syrian communities must be sustained, supported by the international community, and not used by the regime as a bargaining chip," spokesman John Kirby said in a statement, noting that more deliveries are planned for the coming days.

Facing questioning over the administration's insistence that Bashar al-Assad step down, Kerry remained resolute that the Syrian leader should leave power. "As long as Assad is there, you cannot stop the war," he said.

"People don't see how someone who has gassed his own people, driven so many of them into refugee status and displaced, tortured them, starved them, barrel bombed them -- how he somehow is going to be the glue that brings the place back together is beyond anybody's understanding."

Kerry did not mention what alternatives to a political transition are being considered should it proven untenable, but said "there are certainly Plan B" scenarios that are being evaluated.

Highlighting the country's demographic stresses, McGurk emphasized the need for the Arab-majority town of Shedadi in Syria's northeast to remain in Arab hands as Kurdish-led forces fight to retake it from Daesh.

"What I'm primarily focused on also is the politics of this -- who's going to govern a town like Shaddadi afterwards," he said, noting that approximately 40 percent of the thousands of fighters seeking to oust Daesh are non-Kurds. "It's primarily an Arab town, and we're working very closely to make sure that locals are in control of that town, once it's cleared of ISIL."

"The leaders welcomed the prospect of a cessation of hostilities in Syria as outlined by the understanding reached in Munich on February 11, called on all parties to implement it faithfully, and reaffirmed their commitment to a political transition in Syria that will bring lasting peace and legitimate governance to the Syrian people," the White House said. "The leaders underscored the importance of an immediate halt to the indiscriminate bombing of civilian populations."

"The president also discussed with his counterparts steps to alleviate the humanitarian crisis in Syria and the importance of the NATO mission and coordination between Greece and Turkey to manage the flow of migrants into Europe."

A spokesman for German Chancellor Angela Merkel's said all leaders agreed on the need for taking urgent steps to deescalate tensions and to provide humanitarian aid, especially in the Aleppo region.

"As the airstrikes of the Russian Air Force and the Syrian army have already caused great suffering of the civilian population, stopping these would be an essential factor in calming the situation," Steffen Seibert said in a press statement released after the call.

He underlined that all parties will closely monitor the agreement on the cessation of hostilities.

"Especially, there mustn't be any airstrike against moderate Syrian opposition and the civil population. The Syrian and Russian government are bearing a special responsibility for this," he stressed.
Last Update: Feb 24, 2016 10:37 am
RELATED TOPICS