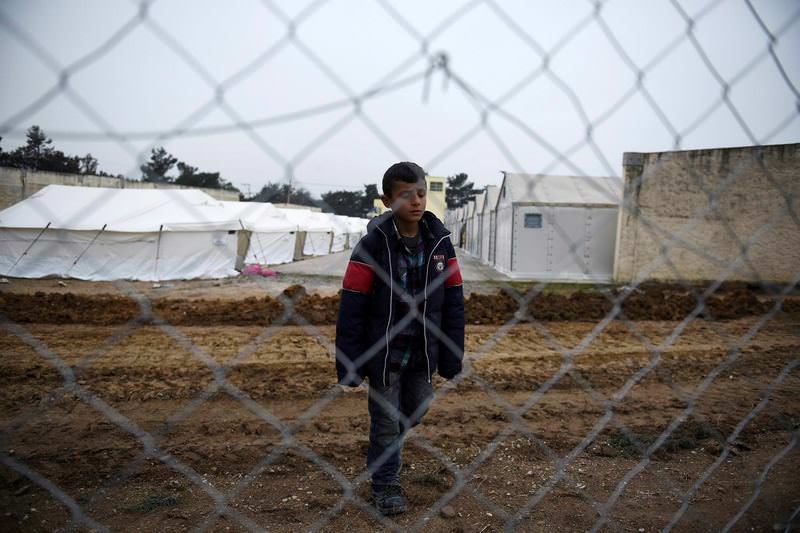 A boy stands behind a fence after the arrival of refugees and migrants at a transit center in the village of Diavata, west of the northern Greek city of Thessaloniki.
by Daily Sabah with Wires Feb 25, 2016 12:00 am

At least 30 countries illegally forced refugees to return to places where they would be in danger last year, Amnesty said on Wednesday as it warned that many governments were brazenly breaking international law. War crimes or other violations of the "laws of war" were committed by governments or armed groups in at least 19 countries, Amnesty said in its annual review of human rights around the world. Amnesty Secretary General Salil Shetty said that short-term national self-interest and draconian security crackdowns had led to an "unprecedented assault on human rights" in 2015. "Your rights are in jeopardy: they are being treated with utter contempt by many governments around the world," he said.

One of the most egregious examples of countries turning their backs on asylum seekers took place when human traffickers left thousands of people from Myanmar and Bangladesh adrift on the open seas without food and water. Hundreds are thought to have died from thirst and hunger as countries in the region played "ping-pong in the sea" with them, Amnesty said.

In Europe, the report strongly criticized Hungary for sealing its borders to keep out thousands of desperate refugees and obstructing collective regional attempts to help them. More than 1 million refugees and migrants arrived in Europe last year, many fleeing war zones. Amnesty said that, with the exception of Germany, the response to the crisis had been woeful. "That Europe, which is the richest bloc in the world, is not able to take care of the basic rights of some of the most persecuted people in the world is shameful," Shetty said. He called for the world to find legal and dignified ways for refugees to reach safety and said 1.2 million of them must be resettled without delay. Around half the arrivals in Europe last year were from Syria, which Shetty described as a "human rights-free zone".

Amnesty condemned the killing in Syria of thousands of civilians in direct and indiscriminate attacks with barrel bombs and other weaponry and criticized lengthy sieges of civilian areas and the blocking of international aid to starving people. Shetty warned that not only human rights, but also the laws and institutions meant to protect them, were under attack.

Many African countries have threatened to walk out of the International Criminal Court, which was set up to end impunity for leaders who commit war crimes. Countries hampering cooperation with the ICC include Kenya, Ivory Coast and South Africa, which ignored a court order last year to arrest Sudan's president. Shetty also said too many governments were using the threat of violence from armed groups as an excuse to "take short cuts on human rights". "The human rights of civilians cannot be sacrificed under some vague notions of combating terrorism," he said. "Human rights are a necessity, not an accessory ... the stakes for humankind have never been higher."

Despite harsh criticism from the right group on several countries, including Greece, Greece may be sliding into a humanitarian crisis, EU officials warned Tuesday, as thousands of migrants became stranded after Macedonia sealed its border and thousands more arrived from Turkey. "We are concerned about the developments along the Balkan route and the humanitarian crisis that might unfold in certain countries, especially in Greece," EU Migration Commissioner Dimitris Avramopoulos and Dutch Migration Minister Klaas Dijkhoff said in a statement. Avramopoulos and Dijkhoff urged EU member states to cooperate "in a joint spirit of solidarity and responsibility." The countries along the Balkan migrant route include EU members Greece, Croatia, Slovenia and Austria as well as neighboring countries Turkey, Macedonia and Serbia. But Greece, which already complained of lacking solidarity in Europe, lashed out with a threat that it may use a veto to block certain countries making EU membership bids over their migration policies. "We are not excluding it [the possibility of veto]," Greek government spokeswoman Olga Gerovasili said, without naming specific countries. On the northern side, Serbia and Macedonia, as well as EU members Croatia and Slovenia, are worried that thousands of people may become stuck on their soil if Germany or Austria decide to shut their gates. Macedonia on Sunday began stopping people from Afghanistan and now only allows Syrians and Iraqis to continue north. Afghans had been waved through in recent months, unlike all others regarded as economic migrants. The latest in the series of filters wreaked havoc in Greece, with up to 6,000 people stuck at Idomeni, a village on the border with Macedonia, as thousands were still arriving on the islands and at Athens' port Piraeus. The crowding was so severe that Greece may within days run out of shelters, aid workers at Idomeni warned. "If Macedonia does not re-open its border to Afghans soon, Greece's sheltering capacity will be full within eight days," a Doctors Without Borders spokeswoman, Gemma Gillie, told dpa.
RELATED TOPICS