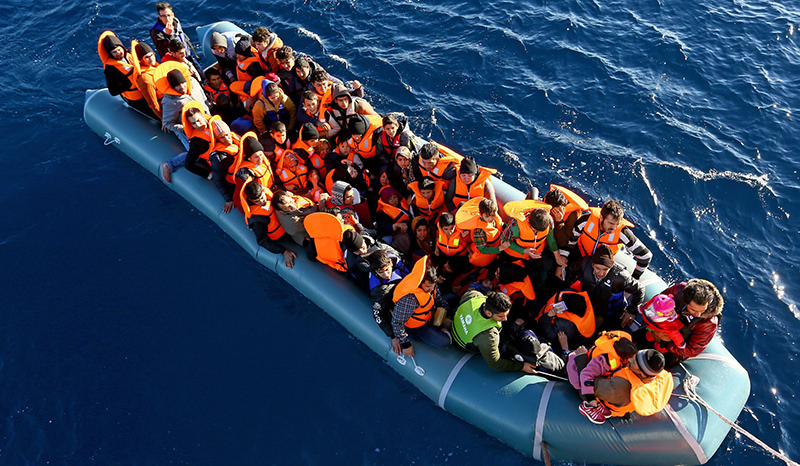 The recent rift between Turkey and NATO over the details of the Aegean mission to curb the flow of refugees has been solved, sources from the Foreign Ministry told Daily Sabah. NATO Secretary General Stoltenberg also confirmed the resolution, making its details publicly known

A recent difference of opinion between Ankara and NATO on the organization's Aegean mission to stop smuggling boats in an attempt to curb the flow of refugees has been solved, sources from the Foreign Ministry told Daily Sabah.

The sources inside the Foreign Ministry told Daily Sabah that the problem has ended and a resolution was reached after reports in the international media claimed that Ankara and NATO fell out regarding NATO cruises patrolling in the Aegean Sea. Ankara reportedly asserted that NATO cruises should be demilitarized and Greek naval ships shall not violate Turkish borders.

NATO Secretary General Jens Stoltenberg also made a statement regarding the issue and revealed the items of the agreement. According to Stoltenberg's statement, NATO naval forces will only be conducting exploration and inspection operations.

"NATO's task is not to turn back the boats," the NATO chief said, while adding that its vessels had a responsibility to rescue people in distress at sea, as does any boat under international law. "In case of rescue of persons coming via Turkey, they will be taken back to Turkey," Stoltenberg added.

NATO vessels arrived in the Aegean last week and are carrying out reconnaissance, monitoring and surveillance activities, the NATO chief said. He added that the alliance is also establishing direct links with the European Union's border agency Frontex.

While NATO vessels will be entitled to continue their mission both on Greek and Turkish territorial waters, Turkish and Greek naval ships will not be allowed to cross borders.

There are reportedly two to five NATO vessels conducting operations in the Aegean at present. NATO did not openly say whether the number will increase or stay the same.

Four vessels under German command, including personnel from Canada, Greece and Turkey, were rerouted last week from another part of the Mediterranean Sea, according to NATO officials.

The request for NATO to conduct operations in the Aegean came following the meeting between Prime Minister Ahmet Davutoğlu and German Chancellor Angela Merkel. The two leaders urged NATO to join the fight against illegal immigration and human smuggling. Turkey currently hosts more than 2.5 million refugees and Greece tries to cope with the flow of refugees reaching Greek islands by boat.

Contributing nearly $9 billion to humanitarian aid over the course of the ongoing Syrian crisis, Turkey's aid for Syrian refugees has been 20 times more than the aid received from international organizations, according to AFAD.
Last Update: Feb 25, 2016 9:06 pm
RELATED TOPICS