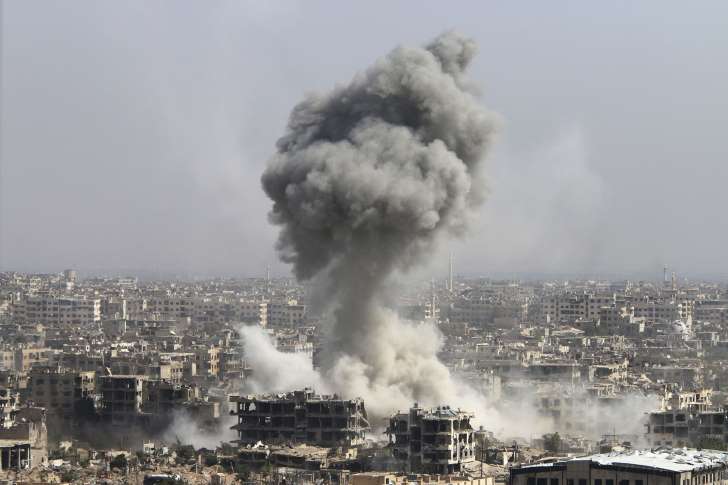 Backed by Russian airstrikes, the Syrian army has launched an offensive in central and northwestern regions. (AP Photo)
by Anadolu Agency Mar 01, 2016 12:00 am

Russia has ended up empowering the terrorist organization Daesh through its airstrikes on Syrian opposition groups, an expert associated with an Ankara-based think tank has said.

In an interview with Anadolu Agency Tuesday, Can Acun, a foreign policy analyst with the Foundation for Political, Economic and Social Research (SETA), said that Russia misled the international community when it claimed it was "fighting terrorist Daesh organization" in the region.

Last week U.S. Colonel Steve Warren, military spokesman for the Global Coalition against Daesh had said:"Some of the strikes that the Russians have conducted have benefited ISIL [Daesh]. There's just no question about that."

Warren's views also concur with UK foreign secretary Philip Hammond, who also stated earlier this month: "The Russians say let's talk, and then they talk and they talk and they talk. The problem with the Russians is while they are talking they are bombing, and they are supporting Assad," while adding: "Their intervention is strengthening Daesh on the ground - doing the very opposite of what they claim to be wanting to achieve."

"Recently, Russia bombed civilian areas along the Aleppo-Azaz line, which led to tens of thousands of women and children leaving for the Turkish border," Acun said.

He said Daesh sustained its defense lines during this campaign and even made some gains against the regime forces in eastern Syria's Deir ez-Zor region.

Acun said Daesh was focusing on counter-attacks against Syrian regime forces, especially around Homs after suffering heavy losses in the last few months.

"Daesh attacked Khanasir, the supply line of the regime, to slow down and halt the advance of the regime forces in eastern Aleppo. We saw it carried out a similar attack in Tel Abyad," he said.

"Last week's attack [by Daesh] in Tel Abyad was aimed at thwarting YPG/SDG troops from further advancing to the south with U.S. airstrikes," Acun added.

The SDG refers to the Syria Democratic Forces group that comprises Kurdish and Arab fighters battling against Daesh group. The YPG is the military wing of PYD, which is the Syrian affiliate of the terrorist PKK organization.

Acun said Daesh was a "pragmatist organization" that frequently implemented "tactical withdrawal" against airstrikes and heavy bombardment in order to not lose territories under its control.

He also said that Raqqa was like the heart of Daesh. "The command and control center of the organization is in Raqqa. It gives importance to Rai, Bab, Jerablus and Menbic areas and keeps them in its hands despite the high military cost.

"It attaches special importance to petrol and gas beds and tries to protect these regions. In addition to giving importance to Raqqa-Mosul logistic lines, the group does not want to lose these lines."

He said it would be difficult for Daesh to take Tel Abyad or keep it amid intensified airstrikes by the international coalition.

Acun said seizure of Tel Abyad by Daesh or YPG would mean no difference. "It should be liberated from the terrorist organizations and given back to Syrians," he said.

About the potential of a ground operation in Syria, the analyst said it was currently not possible since the U.S. was using the PYD terror organization like its own ground troops in Syria.

Last week, the U.S. and Russia announced the cessation-of-hostilities agreement, which went into effect in Syria at midnight Friday.

The Daesh terrorist group and the Nusra Front, Al-Qaeda's Syrian affiliate, are both excluded from the agreement.

On Friday, Russian President Vladimir Putin said Moscow would continue military operations against Daesh and other terrorist groups operating in Syria "even after the cease-fire takes effect".