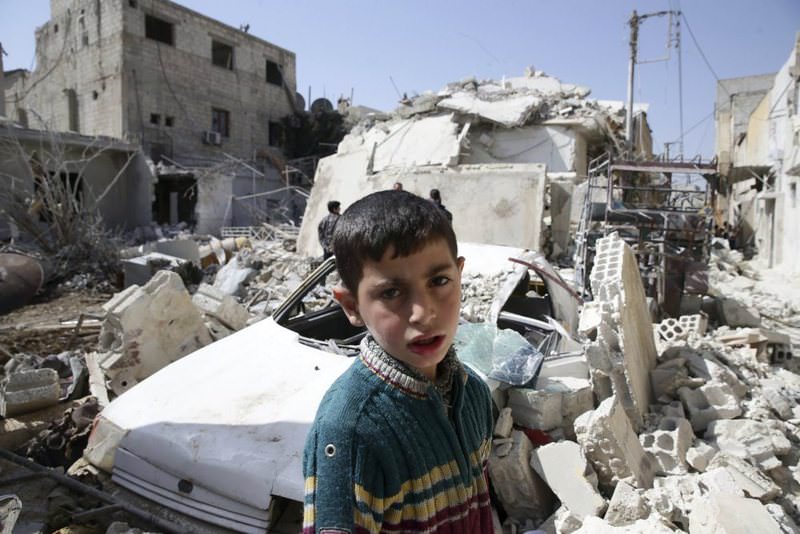 A boy looks on while residents inspect a damaged building in the opposition-held, besieged city of Douma.
by Daily Sabah with Wires Mar 03, 2016 12:00 am

Despite the cease-fire that has entered its fifth day, according to the HNC, regime forces and Russian aircraft continue to violate the agreement, targeting areas where there is no DAESH presence and killing civilians in Syria's Idlib, Aleppo and Hama provinces

Although the first major cease-fire of the Syrian civil war entered its fifth day, violations of the agreement have increasingly continued with regime forces and Russian aircraft targeting several areas in the war-torn country.

The Syrian Observatory for Human Rights said there were clashes that took place in Idlib, Aleppo city and in the town of Harbnafsa in central Hama province.

At least six civilians were killed and eight others injured on Tuesday in Russian airstrikes that hit targets in northwestern Idlib province, according to a local source. A local civil defense official told Anadolu Agency (AA) that the airstrikes had killed six people and injured eight others in Idlib's moderate opposition-held city of Jisr al-Shughur where there is no DAESH presence.

Civilians in central Homs province say that violence has not stopped even though their towns are not being targeted as often.

"There are much fewer airplanes, which is very good. ... There's still artillery, mortar fire, and we hear the planes flying above us," said Hasaan Abu Nuh, an activist in the flashpoint town of Talbisseh, speaking to Agence France-Presse (AFP). "People still have the same routine – they still go down to the shelters when they hear the planes."

The opposition High Negotiations Committee (HNC), however, said there were at least three violations by regime forces on Tuesday and 17 the previous day. Speaking to Orient News this week, HNC Chairman Assad al-Zoubi said that the regime in Syria is increasingly violating the truce. An HNC spokesman also said letters will be sent to the U.N. and foreign ministers to complain about Russian airstrikes around Aleppo and attacks by Hezbollah in Zabadani, including shelling in Latakia province. The spokesman added that the HNC has asked the U.S. for information about how truce monitoring works, but has yet to receive an answer.

The Syrian Network for Human Rights (SNHR) had issued its third report about the breaches for the first three days in the cease-fire agreement. The group recorded 44 breaches -- 27 combat, 17 arrests by government forces, 20 combat breaches by the Syrian government, suspected Russian forces committed six and the PKK-affiliated Democratic Union Party's (PYD) armed People's Protection Units (YPG) committed one breach, adding up to 79 since the beginning of the truce. The report also documented the death of 13 civilians, including three children and two women, 12 by suspected Russian forces and by the YPG.

Russia previously said on Saturday that it had halted bombing in all areas covered by the truce, adding that it will continue striking DAESH, al-Qaida-affiliated al-Nusra Front and other groups Russia designates as terrorists.

Under the U.S.-Russian accord, accepted by Bashar Assad's government and many of his foes, the cease-fire allow aid can reach civilians and talks can open to end the war that has killed more than 250,000 people and made 11 million refugees.