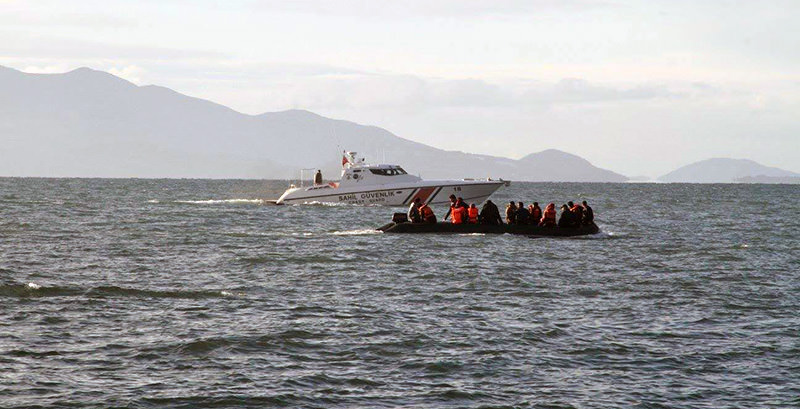 At least 50,000 refugees trying to reach Europe illegally have been found in sea and ground operations by the Turkish authorities in 2016.

Turkey has also said that 183 people have died trying to cross the Aegean Sea since Jan. 1 this year.

According to Anadolu Agency figures, the Turkish Coast Guard saved just over 15,000 refugees so far in 2016 and Turkish gendarmes and police discovered almost 35,000 in ground operations this year.

Turkey's Aegean provinces-Çanakkale, Balıkesir, İzmir, Muğla and Aydın-are prime spots for refugees leaving for the EU, with many Greek islands lying within sight of the Turkish coast.

Over the past year, hundreds of thousands have made short-but-perilous journeys in a bid to reach northern and western Europe in search of a better life.

More than 141,000 refugees have reached Europe by sea so far this year, according to the International Organization of Migration (IOM).

The organization said in a statement Tuesday that 9,294 refugees crossed into Italy and 131,847 others into Greece through the Mediterranean between Jan. 1, 2016 and March 7, 2016.

A total of 443 people died during their trips within the same period in the Mediterranean.

Most refugees, who arrive in Greece and Italy, were Syrians, who continue to flee their country due to an ongoing civil war.

Almost half of the refugees who arrived in Greece are Syrians, while many others are Afghans and Iraqis.

Refugees who arrive in Italy and Greece usually head towards other European destinations, especially Germany.

According to the IOM, more than a million refugees crossed into Europe via the sea last year; 3,735 people died trying to cross it.