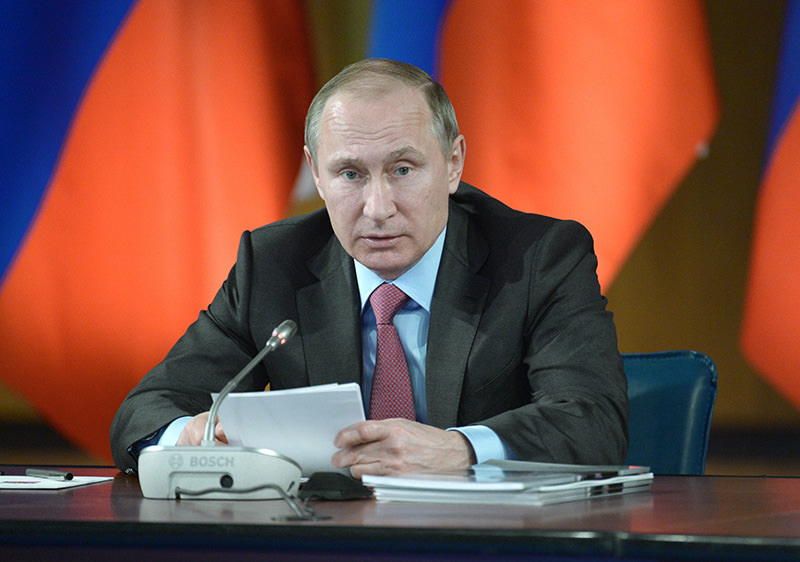 Russian President Vladimir Putin on Monday ordered his military to start the withdrawal of the main part of Russian troops from Syria, saying that the Russian military intervention had largely achieved its objectives.

Putin, at a meeting in the Kremlin with his defense and foreign ministers, said the pullout should start from Tuesday. He also ordered that Russia intensify its role in the peace process to end the conflict in Syria.

"The task that was set before our defense ministry and armed forces has as a whole been completed and so I order the defence ministry to, from tomorrow, start the withdrawal of the main part of our military contingents from the Syrian Arab Republic," Putin told Defense Minister Sergei Shoigu in televised comments.

Putin said the move should help serve as a stimulus for Syria's political talks. The president said he coordinated the move with Syria's Bashar Assad.

Kremlin spokesman Dmitry Peskov said Putin had telephoned Assad to inform him of the Russian decision. The move was announced on the day United Nations-brokered talks between the warring sides in Syria resumed in Geneva.

Putin said that the Russian airbase in Hemeimeem in Syria's coastal province of Latakia and a naval facility in the Syrian port of Tartous will continue to operate.

The United States and Russia announced plans on Feb. 22 for a cessation of hostilities in Syria, excluding Daesh and Nusra Front militants, that would take effect starting on Saturday.

Russia began air operations in Syria on Sept. 30 after receiving parliamentary approval. The Kremlin claimed the airstrikes, which followed a military buildup in Syria, aimed to support the forces of Syria's Bashar Assad, a long-standing Russian ally, against Daesh. However, Turkey and the West have accused Russia of targeting moderate fighters opposed to Assad, many of which are supported by Turkey and the United States.