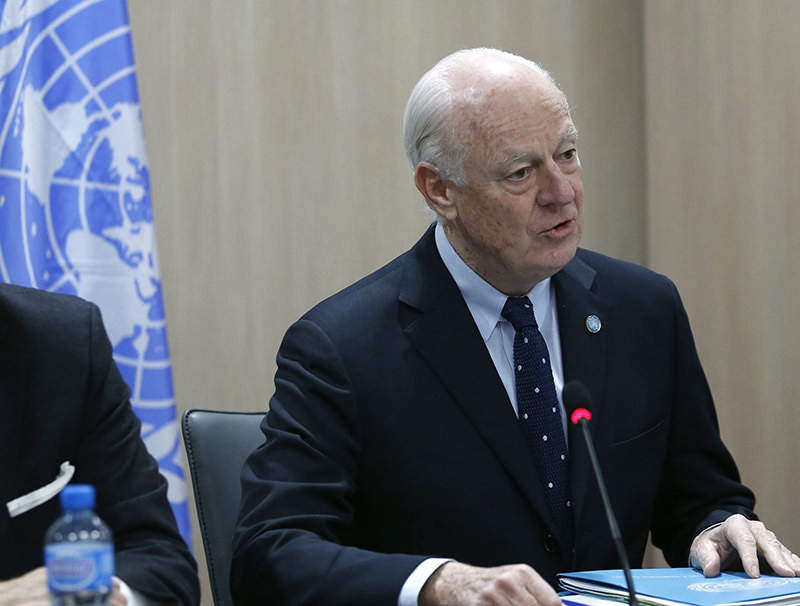 The United Nations special envoy for Syria has started a meeting with the moderate opposition after holding a moment of silence to mark the five-year anniversary of the uprising against Syria's Bashar Assad.

Staffan de Mistura asked for a minute of silence as he convened envoys from the High Negotiations Committee on Tuesday. Several attendees folded their arms, and some appeared to pray.

De Mistura restarted indirect Syrian peace talks in Geneva a day earlier by meeting with envoys from the Assad regime.

Meanwhile, the U.N. envoy for Syria de Mistura has rounded out his team of top advisers with a Russian expert on the Middle East.

The U.N. special envoy for Syria restarted peace talks between the regime and the opposition on Monday, warning that the only alternative is a return to war and describing the political transition in the country now led by Bashar Assad was "the mother of all issues."

Moments before meeting with a Syrian regime envoy, Staffan de Mistura laid out both high stakes and low expectations for what is shaping up as the most promising initiative in years to end the conflict that moves into its sixth year on Tuesday.

The Geneva talks are part of a diplomatic push launched with U.S.-Russian support to end the war that has killed more than 250,000 people, created the world's worst refugee crisis, and allowed for the rise of Daesh terrorist group. Opening the indirect talks, de Mistura said Syria faced a "moment of truth".

U.S.-Russian cooperation had already brought about a lull in the war via a "cessation of hostilities agreement" that led to a sharp decline in fighting between rebels and the Assad regime in western Syria, though many violations have been reported.

The Bashar Assad regime, which had been losing ground to rebels before Russia intervened, had indicated it was in no mood to give ground to the opposition on the eve of the talks that started on Monday, calling the presidency a "red line".

A peace process for Syria endorsed by the U.N. Security Council in December calls for a Syrian-led process that establishes "credible, inclusive and non-sectarian governance", a new constitution, and free, fair elections within 18 months.

The main opposition delegation wants Assad out of power by the start of a transition. While some rebels have expressed guarded optimism at Putin's announcement, others doubt he is about to put serious pressure on Assad.

"We do not trust them," said Fadi Ahmad of the First Coastal Division, who says his rebel group has been fighting a Russian-backed regime offensive near the Turkish border throughout the cessation agreement that came into effect on Feb. 27.

Many observers say the peace talks offer the best chance in years to end Syria's conflict, which has left at least 250,000 people dead and displaced millions.

The uprising began with mostly peaceful protests. A brutal regime crackdown fueled the rise of an armed insurgency, plunging the country into a full-blown civil war that has sucked in regional and global powers.