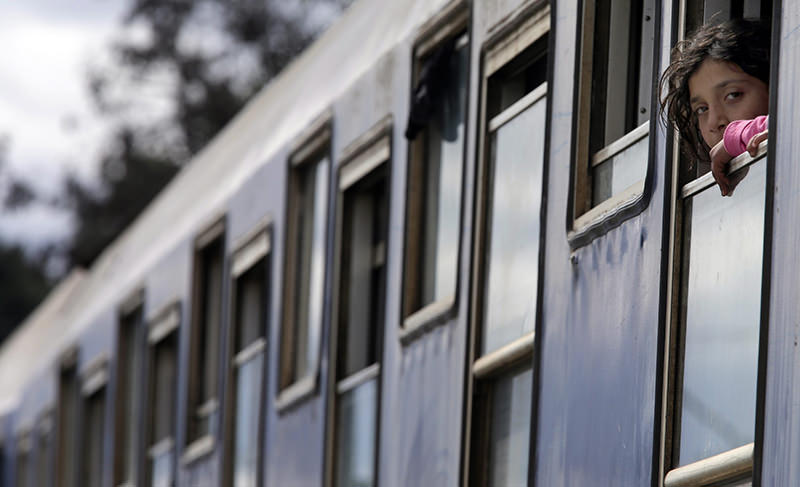 Greece on Thursday said no refugees had arrived on its Aegean islands in the previous 24 hours, for the first time since the EU-Turkey deal to halt the massive influx came into force at the weekend.

But France's Defence Minister Jean-Yves Le Drian said "hundreds of thousands" of migrants were in Libya hoping to cross to Europe, amid fears the shutdown of the Turkey-Greece route could encourage people to attempt the even more dangerous Mediterranean crossing to Italy.

The high-level panel coordinating Greece's response to the crisis cautioned that bad weather may also explain the halt in boat arrivals from neighboring Turkey, as the Aegean has been buffeted by storm-force winds since Wednesday.

The European Union (EU) and Ankara struck a deal on Friday aiming to cut off the sea crossing from Turkey to the islands, which bore the brunt of a refugee wave last year.

The agreement, under which all migrants landing on the Greek islands face being sent back to Turkey, went into effect early on Sunday.

Greek authorities have been using the relative calm to set in place the logistics for sending people back, which includes deploying 4,000 security personnel and asylum experts.

Prime Minister Alexis Tsipras was to chair a ministerial meeting Thursday to assess the implementation of the accord.

In 2015 more than a million refugees entered Europe, about half of them Syrians fleeing war, with Germany shouldering most of the burden.

Of these, around 850,000 people made the sea crossing to Greece from Turkey -- a route that also claimed more than 300 lives.

Under the refugee deal, for every Syrian sent back, the EU will resettle one Syrian from Turkey, a country that is hosting nearly three million people who have fled the Syrian crisis.

The idea is to reduce the incentive for Syrian refugees to board dangerous smugglers' boats to cross to Greece, encouraging them instead to stay in Turkish refugee camps to win a chance at resettlement in Europe.

The EU will also speed up talks on Ankara's bid to join the 28-nation bloc, will double refugee aid to six billion euros ($6.8 billion), and give visa-free travel to Turks in Europe's Schengen passport-free zone by June.

The deal also plans major aid for Greece, a country now struggling not only with a debt crisis but with some 47,500 refugees stranded on its territory, thousands of them at the Macedonian border.

All new arrivals in Greece are being taken to registration centers set up on five Aegean islands.

Those seeking asylum will stay there while their application is considered by Greek and European officials.

On the other side of the Mediterranean, Le Drian told Europe 1 radio that an estimated 800,000 migrants were in Libya, hoping to reach Europe after fleeing conflict and poverty in the Middle East and elsewhere.

More than 100,000 people crossed the Mediterranean Sea in the first two months of 2016 alone, according to the UN refugee agency.