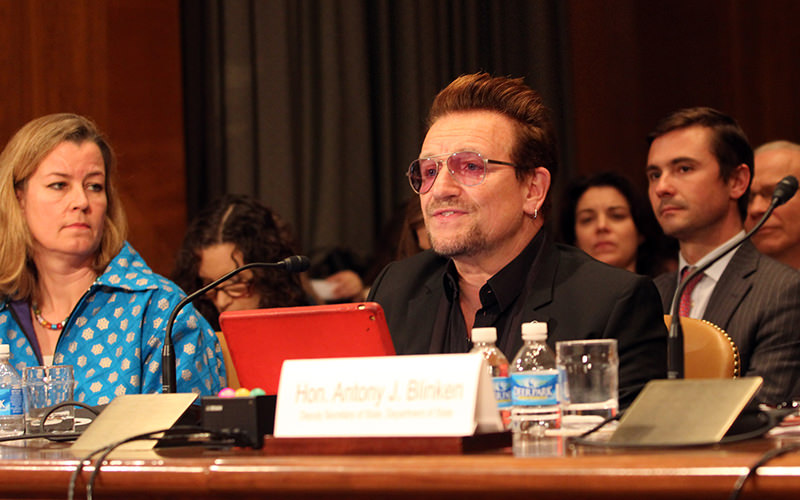 The United States should lead efforts to create a "Marshall Plan" to solve the refugee crises in the Middle East and North Africa, U2 frontman and activist Bono told lawmakers Tuesday.

Bono made his appeal at a Senate subcommittee hearing on terrorism and foreign assistance, telling his audience that the aid is vital in order to "head off the rise of violent extremism" in the region.

He argued that the refugee crisis is not only a humanitarian disaster but also generates political instability that poses security threats to the US.

"In the spirit of the Marshall Plan, America once again has the chance to advance global security through global generosity, and turn this moment of great jeopardy into a time of opportunity," said Bono, founder of the ONE campaign to fight extreme poverty.

Washington is leading a military coalition against Daesh terrorists in Iraq and Syria, but has come under criticism for not doing enough to resettle more refugees in the country.

Bono said ending the five-year conflict in Syria was essential to solving the refugee crisis.

But he emphasized that the turmoil had affected places farther afield - such as Washington's strategic ally, Europe, where countries have enacted border checks and sealed their frontiers to migrants.

"In 1989, the wall that divided Europe came down. In 2016, barbed wire fences that divide Europe are going up. The integration of Europe the very idea of a Europe "whole and free" is now under threat."

More than 1 million migrants reached Europe last year. Most of them came via Turkey to Greece, undertaking deadly sea journeys as they fled war or sought new economic opportunities.