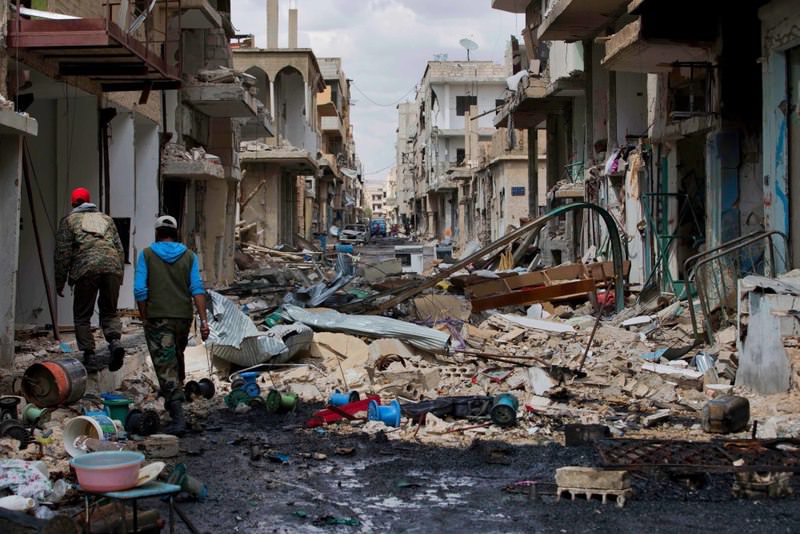 People walk through a devastated part of the town of Palmyra as families load their belongings onto a bus in the central province of Homs, Syria on April 14. (AP Photo)
by Daily Sabah with AFP Apr 16, 2016 12:00 am

As escalating violence in Syria threatens the cease-fire, the U.N. has said regime forces, backed by Russian and Syrian planes, were seeking to cut off roads and ‘completely besiege' eastern neighborhoods

Fighting escalated on several fronts Thursday around Syria's second-largest city of Aleppo as a Russia-backed government offensive strained a landmark cease-fire and a new round of peace talks in Geneva.

On the ground, government fighters, rebels and extremists battled for control of swathes of Aleppo province, threatening a nearly seven-week cease-fire that had seen violence drop. Regime loyalists backed by Russian airpower pressed a fierce offensive just north of the provincial capital of Aleppo city, the Syrian Observatory for Human Rights said.

Fighting was heaviest around Handarat, a hilly area that lies along a route leading north out of opposition-held parts of the city.

Observatory head Rami Abdel Rahman said regime forces, backed by Russian and Syrian planes, were seeking to cut off that road and "completely besiege" eastern neighborhoods. An Agence France-Presse (AFP) correspondent in opposition-held eastern Aleppo city said the booming crashes of strikes could be heard throughout the day, but no raids hit the city itself.

"We're overwhelmed once again by fears of a government siege of Aleppo after weeks of a cease-fire that may have just collapsed," said Ali Saber, a 32-year-old father of one living in Aleppo. The assault has sparked "strong concerns" in Washington about the cease-fire, which saw violence plummet for the first time in the five-year conflict since it took effect on Feb. 27. A senior U.S. administration official said the offensive "could well violate the cessation of hostilities, which has ... been under increasing pressure in recent weeks."

"Now is the time for all sides to follow through on their commitment to the cessation of hostilities and to refrain from any further destabilizing actions," the official added.

European Union foreign policy chief Federica Mogherini also expressed concern about the Aleppo offensive and called for the "respect, consolidation and expansion" of the truce.

The official said the U.N. was planning several aid deliveries to Afrin and Azaz – two flashpoint areas in the province – in the coming days. But de Mistura said restrictions by Damascus have frustrated efforts to deliver the much-needed assistance to besieged Syrians.

Despite several U.N. Security Council resolutions that call for unobstructed aid access to besieged areas, the regime continues to frequently deny passage to convoys carrying assistance. "Everyone in the meeting was disappointed," de Mistura told reporters after a weekly meeting of the so-called humanitarian taskforce. "Many of [the countries] are actually frustrated by the lack of new convoys," he added, naming Douma and Daraya, both besieged by the regime near Damascus, as being in dire need of aid.

De Mistura said he made some progress in Damascus by securing tentative permission to distribute medical supplies, but that the government had specifically excluded surgical equipment, anti-anxiety pills and atropine, which can be used to guard against poison, including sarin gas.

The observatory said Thursday that DAESH fighters have seized a string of opposition-held villages. Rebels had secured significant gains against DAESH in the area before the extremists pushed them back this week.

In March 2011, Syrians were emboldened enough to raise their voice against Assad's dictatorship. The regime clamped down on the peaceful protests and the country was subsequently dragged into a civil war after opposition groups took up arms against the government. The civil war has now entered its sixth year and has caused the deaths of thousands of people.
RELATED TOPICS