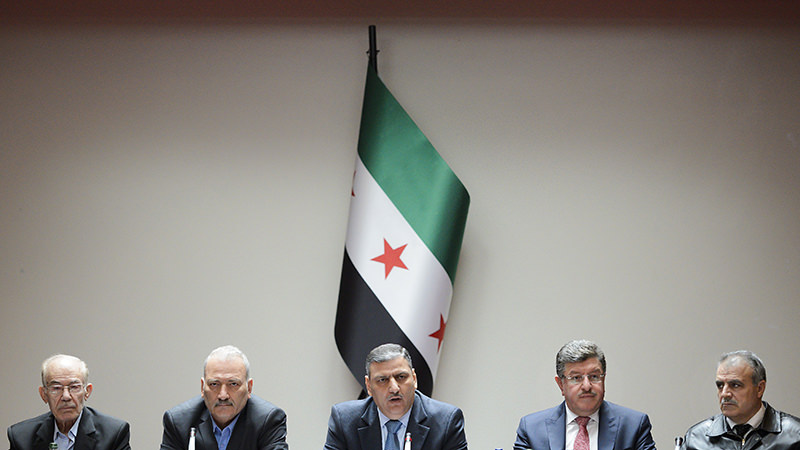 by Compiled from Wire Services Apr 18, 2016 12:00 am
The Syrian opposition coalition in Geneva says the continuation of peace negotiations amid regime attacks and denial of humanitarian access seems "absurd."

The High Negotiations Committee has called for a "serious review" of the talks, saying in a statement Monday that it will postpone its participation in the talks — not walk out — to give time for such a review.

In a statement posted by Riad Agha, a delegation member, on his Facebook page and shared by other opposition members, the HNC said the postponement "is a chance for all to implement (the relevant UN resolution) and to respond to the main issue, which is forming a governing body in which Assad has no role."

The U.N. Special Envoy Staffan de Mistura said he convinced the opposition delegation to remain in Geneva to engage in "technical discussions" with him and his team over Syria's political transition. He didn't elaborate.

The mainstream Syrian opposition had asked the United Nations to halt peace talks and opposition groups launched a new offensive against regime forces, accusing the world body of bias in favor of Bashar Assad.

The opposition's coordinator at the Geneva talks, Riad Hijab, said earlier it was unacceptable for talks to go on if the regime and its allies pushed on with sieges and bombing civilian areas, echoing recent criticism of regime offensives elsewhere.

Only three delegates met U.N. envoy Staffan de Mistura for talks on Monday, instead of the usual 15, after a letter signed by unspecified "armed revolutionary factions" said de Mistura and the regime were trying to put forward "half-solutions".

"We asked for the postponement of talks, only a postponement until the conditions are right," Mohammad al Aboud, a member of the negotiating team, told Reuters.

The Western-backed opposition High Negotiations Committee (HNC) later confirmed the decision in a statement, saying a pause would be "a chance ... to respond to the core subject of forming a governing body that has no role for Assad".

The HNC emphasized that it was not walking out of the talks, the first attempt to negotiate a way out of the five-year-old conflict in two years; a diplomat said they wanted the United Nations to publicly criticize the regime.

"De Mistura must imperatively reassure the opposition," one senior Western diplomat said. "He needs to make a public statement putting pressure on the regime. It's in his interest to keep the talks alive. He needs to say that the regime isn't listening."

A Feb. 27 cessation of hostilities agreement was meant to provide a breathing space for talks to end the war via a transitional authority and elections. But the regime, which is backed by Russia and Iran, says Assad must stay in power pending national elections.

Both sides have accused the other of breaking the partial truce deal, which does not include Daesh or al Qaeda's Nusra Front, and which began to unravel as fighting escalated near Syria's second city Aleppo this month.

On Monday, the opposition launched a fierce attack against regime forces in Latakia province, which lies on the Mediterranean coast, and made separate advances further east in Hama, while there were heavy regime air strikes in Homs province to the south.

The Latakia and Hama assaults appeared to be part of a new battle announced by oppositon groups early in the day, the Syrian Observatory for Human Rights monitoring group said. A Syrian military source confirmed intense fighting in the area.

"Today they attacked in the northern Latakia countryside in several areas, in violation of the cessation of hostilities agreement, and also in the northwestern Hama countryside," the military source said.

Mohamad al-Shamsi, a doctor in the Homs area, told Reuters there had been at least 10 air raids from early morning on Rastan and nearby Deir Foul and al-Houla. Schools had been evacuated and hospitals shut.

Groups including factions fighting under the banner of the Free Syrian Army and powerful Ahrar al-Sham, said in their battle announcement that they would respond "with force" against any regime forces that fired on civilians.

They announced the "formation of a joint operations room to begin the battle ... in response to violations by the army".

The Geneva talks aim to end a war that has killed more than 250,000 people, created the world's worst refugee crisis, allowed for the rise of the Daesh and drew in regional powers. Russia's intervention in the conflict swayed the war in Assad's favor.

A letter signed by unspecified "armed revolutionary factions" urged negotiators to "take firm and decisive stances towards the half-solutions being propagated ... by the regime's allies, and de Mistura".

It also said international pledges to deliver aid, halt the bombing of residential areas and free prisoners had not been met. "We follow with great concern and outright rejection the moves of de Mistura, some of which show a total bias towards ... the demands of the regime and its allies," the letter said.

In a meeting with the main opposition High Negotiations Committee on Friday, de Mistura mentioned the idea of Assad remaining in power symbolically in exchange for the opposition's nomination of three Syrian vice-presidents.

Diplomats and opposition officials sought to play down the comment, saying it was not de Mistura's idea but rather one of several, from unidentified experts and not considered serious. It was subsequently dismissed outright by the opposition.

With both sides already trading barbs in Geneva and fighting escalating anew in Syria, the focus appears to be shifting to simply keeping the opposition at the table.

"If they walk away, they will be held responsible and it will be difficult to return soon," a Western diplomat said.

On Monday, the chief Syrian regime negotiator Bashar Ja'afari told reporters he had exchanged ideas with de Mistura on "important issues" but did not take questions or make any mention of a political transition.

"The transitional government will be a difficult task for both the regime and the opposition parties," Chinese special envoy Xie Xiaoyan told reporters. "But that doesn't mean they should ... leave the discussion and go back to the battleground."