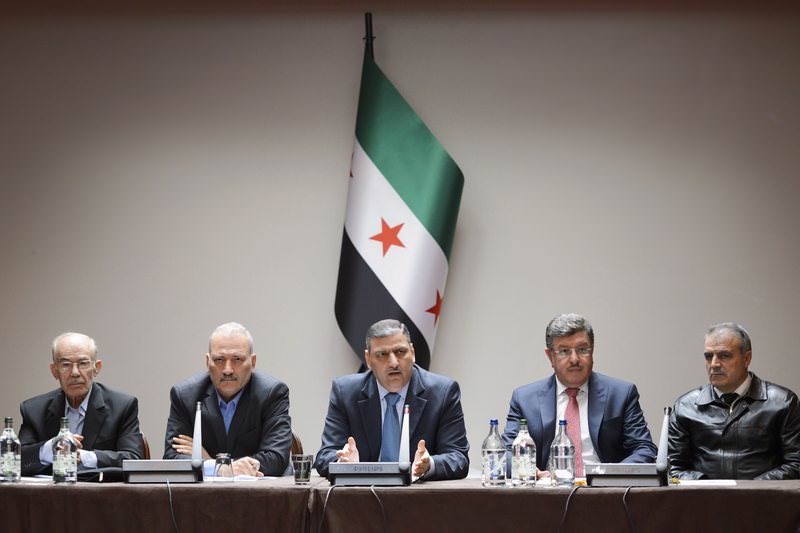 The opposition High Negotiations Committee (HNC) (AFP Photo)
by Apr 19, 2016 12:00 am
The chief coordinator of Syria's main opposition bloc urged major powers on Tuesday to meet to re-evaluate a truce that he said was no longer in force, adding that there could be no peace talks while the Syrian people continued to suffer.

"We are waiting for the International Syrian Support Group (ISSG) to take decisive measures against the one who is killing the Syrian people," Riad Hijab told reporters, saying the powers had to assess a cessation of hostilities that had "ended".

The opposition High Negotiations Committee (HNC) was "out" of the negotiations, he said, though some HNC experts would remain for meetings.

"There will be no solution with President Bashar al-Assad in power, he is dreaming," Hijab said, adding that he and other officials planned to leave Geneva on Tuesday.

A senior Western diplomat said the idea of a meeting of major powers was under discussion.

"There is a question whether we need to reaffirm the parameters of the cessation at one point soon and whether there will need to be further reflection by the ISSG, but we're not there yet," the diplomat said.

France's Foreign Minister Jean-Marc Ayrault said U.N. special envoy Staffan de Mistura needed to highlight the responsibilities of each party to the talks, especially those of the regime and its supporters.

De Mistura should "require them to exert the necessary pressure to help further the political process," the minister told the envoy in a letter seen by Reuters.

France has been a key backer of the opposition and has repeatedly called on Assad to step aside.

The letter also said the Syrian government was in breach of U.N. resolutions following its offensives, including on Aleppo.

"Over the last four years the regime has had a history of using siege situations to score political points. It is important that the United Nations continue to act as a deterrent in this regard," the letter said.

Ayrault also suggested that the surveillance mechanism for the cessation of hostilities could be strengthened in coordination with the U.N. Security Council.