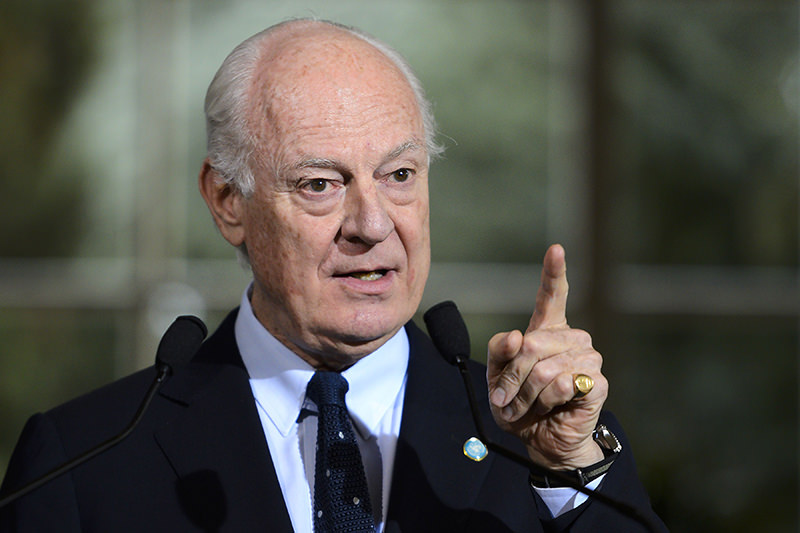 The U.N. Special Envoy for Syria said on Thursday peace talks will continue next week despite the main opposition's decision to leave early, a move he dismissed as "diplomatic posturing".

Staffan de Mistura, in an interview with French-language Radio Television Suisse (RTS), said 400,000 people had been killed in the five-year-old war, far higher than the previous U.N. toll which has varied from 250,000 to 300,000.

All members of the main Syrian opposition will leave peace talks in Geneva by Friday, their chief negotiator Asaad Zoubi said on Thursday, with little prospect of talks resuming unless the situation radically changes on the ground.

"There is also lots of diplomatic posturing and it's normal.

That is to say, propose things that are more difficult to accept leave and come back, leave again and come back," de Mistura said. "It's also fairly justified, because there are moments when one asks whether the ceasefire is holding."

Asked whether the talks would continue, he said: "We cannot let this drop. We have to renew the ceasefire, we have to accelerate humanitarian aid and we are going to ask the countries which are the co-sponsors to meet."

World and regional powers sponsor the fragile cessation of hostilities that went into effect on Feb 27 but has been left in tatters by increased fighting in the past week in Aleppo, Latakia and other hotspots.

The latest round of talks, which began on April 13, was meant to focus on the thorny issue of political transition. But the Damascus delegation has called for a national unity government, and shows no signs of accepting opposition demands for Bashar Assad to go.

"His interest is to try to stay in power, in my opinion. In the current conditions, the solution is political transition," de Mistura said.

"Despite the negotiating tension, they all agree - all of them - that there must be a transition, that means a radical change," he said.

De Mistura, asked to confirm whether "the partisans and enemies" of Assad have met in Geneva hotels and spoken directly, replied:

"You know in all negotiations, there are formal discussions. And that's exactly the reason you have to extend them by several days, it allows for what is called informal diplomacy."

Pressed to say whether the two sides had met, he said: "They all know each other, and they are all Syrians. And I would like to believe in the end they believe in Syria too."