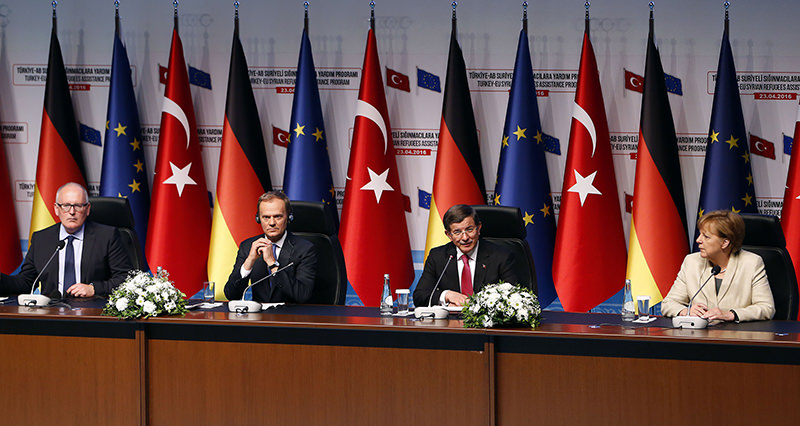 "No one has a right to lecture Turkey on what it should be doing," Tusk said, and added: "This is not only a political and formal assessment... this is also my very private and personal feeling."

Meanwhile, Prime Minister Davutoğlu said that the readmission deal will not be fulfilled without EU visa liberalization for Turkish citizens.

Turkey met all its responsibilities in the refugee deal, such as issuing refugee work permits, Davutoğlu said, emphasizing that Syrians were not being sent back to their war-torn homeland against their will.

He noted that the number of irregular crossings by refugees to Greece has dropped considerably, which he said shows that the Turkish-EU refugee deal is working.

Davutoğlu added that since the deal came into effect in March, around 130 crossings have been recorded per day. On some days, no refugees at all crossed over to the Greek islands, he said.

Davutoğlu also responded to criticisms to the EU deal and said: "With our deal with the EU, our aim was to stop Aylan Kurdi's from washing ashore ever again."

In response to a question about rockets fired from Daesh-held territory in Syria, Davutoğlu said that Turkey will take all necessary measures to prevent further attacks on border town of Kilis, while German Chancellor Angela Merkel said that Germany is pushing for safe zones near the Turkish border in Syria.

"We saw that Syrians were embraced [here] as a society," she added. Turkey is the country that accepted the highest number of refugees. EU needs to take responsibility as well."

Merkel also said that seeing what has been done and accomplished regarding the refugees was important for her.

She added that 120,000 refugee children are living in Gaziantep and that all are expected to go to school thanks to the EU funds.

According to Prime Ministry's Disaster and Emergency Management Authority (AFAD), there are 2,748,558 Syrians living in Turkey.

Turkey's aid for Syrian refugees, which amounts to nearly $9 billion, accounts for 20 times the aid it received from international organizations, according to AFAD.

Syria has remained locked in a vicious civil war since early 2011, when the Bashar Assad regime cracked down on pro-democracy protests with unexpected ferocity.