US, UK ground troops in Syria to topple Assad would be a mistake, Obama says 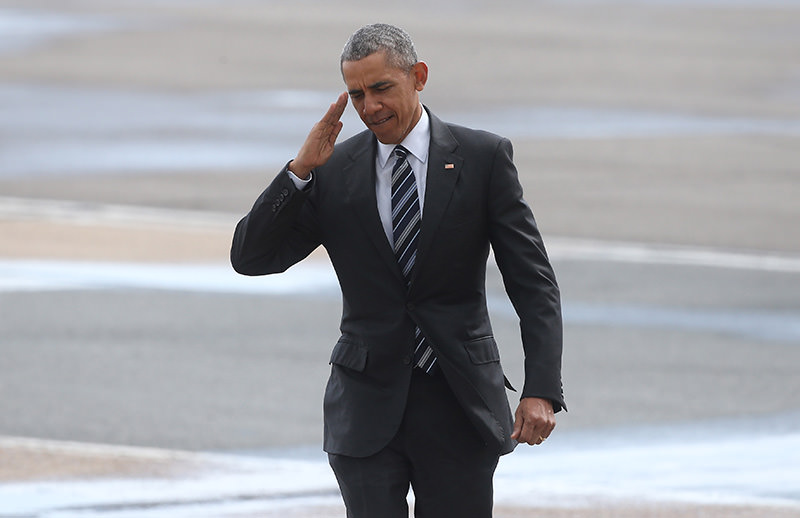 U.S. President Barack Obama warned Sunday that it would be a "mistake" to send Western troops into Syria to overthrow the regime of Bashar al-Assad.

In an interview with the BBC, he said the United States would continue strikes against the Daesh group while continuing efforts to broker a transition deal between the Assad regime and his moderate Syrian opponents.

"Syria has been a heart-breaking situation of enormous complexity, and I don't think there are any simple solutions," Obama said during his visit to London which ended Sunday.

"It would be a mistake for the United States, or Great Britain, or a combination of Western states to send in ground troops and overthrow the Assad regime.

"But I do believe that we can apply international pressure to all the parties, including Russia and Iran, who, essentially, are propping up Assad, as well as those moderate oppositions that exist and may be fighting inside of Syria, to sit down at the table and try to broker a transition.

The British state broadcaster released excerpts of the interview on Sunday as Obama, whose second and last term of office ends in January, travelled from Britain to Germany in what is expected to be his last major international tour.

Obama has consistently been sceptical about the merits of intervention in Syria's five-year-long civil war, despite calls from Turkey and Gulf allies for more support for rebels fighting Assad and the Daesh terrorists.

The US has reportedly provided limited covert support to Syrian rebels, and a contingent of about 50 US special forces was sent to Syria late last year to assist PYD forces in their ground offensive against Daesh in northern Syria.

The BBC quoted Obama as saying that he did not think the Daesh would be defeated in the remaining nine months of his presidency.

At least 30 civilians were killed Saturday in fighting in areas across Syria, threatening an eight-week-old truce as peace talks in Geneva remain stalled.

The truce, brokered by Russia and the United States, had raised hopes that United Nations-backed talks in Geneva this month will help resolve the five-year conflict.

"There's going to be a military component to this, to ensure that... we're also engaging in the counter-terrorism activities that are necessary," Obama said.

"But in order for us to solve the long-term problems in Syria, a military solution alone -- and certainly us deploying ground troops -- is not going to bring that about."

Syria's civil war, which started in 2011 after al-Assad's forces launched a brutal crackdown against protests, has cost a quarter of a million lives and displaced half the country's population, according to UN estimates.