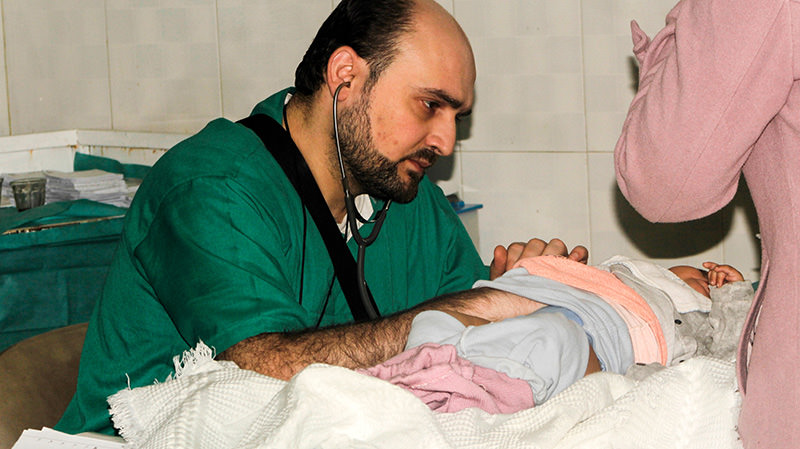 Russia backed Syrian regime airstrikes continued indiscriminately targeting civilian areas of Aleppo devastated by the five-year-long civil war over the weekend, damaging a clinic just days after a strike on another hospital, killing the city's only pediatrician that was left

Syrian doctor Mohammad Wassim Maaz saved the lives of countless children in the war-ravaged neighbourhoods of Aleppo city before an air strike this week on a hospital took his own.

He kept his beard nearly trimmed and maintained an unlikely sense of humour given the horrors he saw on a near daily basis in the rebel-held parts of the northern city.

"Dr Maaz was considered the best pediatrician and was one of the last ones left in this hell," one of his colleagues told AFP.

Late on Wednesday night, an air strike on the Al-Quds hospital in the Sukari neighbourhood took his life and those of a dentist, three nurses and 22 civilians.

Maaz was originally from Aleppo and had been preparing to cross the border into Turkey to visit his family.

"Like so many others, Dr Maaz was killed for saving lives," said Dr Hatem, a colleague who preferred not to give his full name. Hatem manages the Children's Hospital in Aleppo, where Dr Maaz worked during the day before tending to emergency cases in Al-Quds hospital overnight.

"Dr Maaz and I used to spend six hours a day together. He was friendly, kind and he used to joke a lot with the whole staff. He was the loveliest doctor in our hospital," Hatem wrote in a letter published by The Syria Campaign advocacy group.

More than 270,000 people have been killed in Syria's brutal conflict, which has seen hospitals destroyed and medical staff killed across the country.

"Dr Maaz stayed in Aleppo, the most dangerous city in the world, because of his devotion to his patients," Hatem said.

The attack on Al-Quds has been widely condemned, including on Friday by the UN children's agency and the World Health Organization.

Attacks on hospitals "deprive families and communities of essential health care when they need it most."

Al-Quds hospital was supported by both Doctors Without Borders (MSF) and the International Committee of the Red Cross.

MSF spokeswoman Mirella Hodeib said Dr Maaz was a "very dedicated paediatrician and chose to risk his life to help the people of Aleppo".

"His death is a terrible loss," she told AFP by phone.

MSF said it had been donating medical supplies since 2012 to the 34-bed Al-Quds hospital, where eight doctors and 28 nurses worked full time.

"Out of the eight doctors, there are now only six left," Miskilda Zancada, the head of MSF's Syria mission, told AFP from Kilis in Turkey.

She said 95 percent of the doctors in opposition-held parts of the city have left or been killed, leaving between 70 to 80 doctors to treat 250,000 people.

"The people who are left in Aleppo are the most vulnerable," Zancada said.

'The city is bleeding'

A group of seven doctors still practising inside Aleppo city issued a joint letter on Friday commemorating their fallen colleagues and calling for an end to violence.

"We will always remember Dr Maaz as the kindest and bravest of souls, whose devotion to treating the youngest victims of this war was unparallelled," they wrote.

The doctors also commemorated Dr Mohammed Ahmad, the dentist killed in the strike on Al-Quds.

"Another dear friend, Dr Mohammed Ahmad, one of the ten dentists remaining in eastern Aleppo, was also killed in the air strikes," they said.

At least 730 Syrian doctors have been killed in the country over the past five years, according to the letter.

"Our hospitals are at breaking point. If this isn't a sign that the cessation of hostilities has failed then we do not know what is."

"Soon there will no medical professionals at all left in Aleppo -- where will civilians turn to for care and attention?"

The fighting in Aleppo city, particularly on its northern edges, threatens to cut off the only remaining route out of the eastern rebel-held districts.

The doctors' letter warned that the violence has already disrupted their access to desperately needed medical supplies for their patients.

With more than 200 civilians killed over the past week in a fresh eruption of violence, the Aleppo doctors mourn not just their colleagues, but their city.

"Over the last week, our worst fears were driven home in the most horrific circumstances. The city is bleeding."