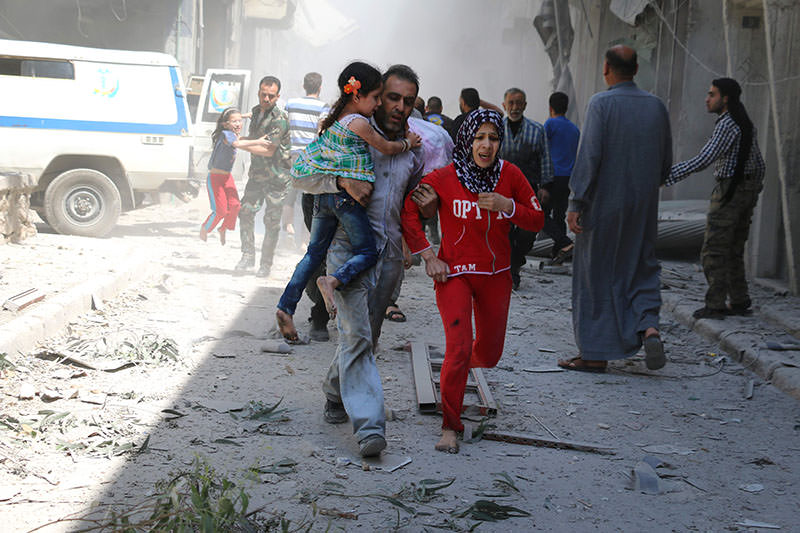 The Syrian regime hit rebel areas of Aleppo, killing and wounding dozens of civilians despite international outrage over renewed violence. Activists and experts say a new influx of refugee may be expected following recent violence

The Syrian government launched new airstrikes Saturday in rebel-held areas in the northern city of Aleppo where nearly 250 civilians have been killed in the past nine days. Terrified residents fled the new wave of airstrikes in the divided city as key regime backer Russia rejected calls to rein in its ally.

The surge in fighting has caused the collapse of a two-month cease-fire brokered by the United States and Russia. It also has raised fears of an all-out government assault on Aleppo. Even though a truce in other parts of the country appeared to be holding on its first day, activists and experts say a new refugee influx may also be expected with the violence simmering once again in Aleppo. An activist in Aleppo told Deutsche Presse-Agentur (DPA) that the regime planes focus their raids on areas where civilians live. "They want to kill as many civilians as they can to raise fear and force the survivors to flee the area," he said.

The International Committee of the Red Cross (ICRC) warned that the intensification of fighting threatens to cause a humanitarian disaster for millions of people. With the peace process hanging by a thread, U.S. Secretary of State John Kerry flew to Geneva on Sunday for talks with United Nations envoy Staffan de Mistura and the Saudi Arabian and Jordanian foreign ministers.

A truce was called in February between Assad's forces and a coalition of rebels but has since begun to break down, particularly in the besieged city of Aleppo. Aleppo was left out of a new temporary U.S.-Russian brokered truce that appeared to be holding in the regime stronghold of Latakia as well as Damascus and the nearby rebel bastion of Eastern Ghouta. A new round of U.N.-backed peace talks is set to start on May 10 in Geneva. In Aleppo's rebel-held east, dozens of civilians left the battered Bustan al-Qasr district early Saturday, an Agence France-Presse (AFP) correspondent said. "The situation has become unbearable," Abu Mohammed said as he prepared to flee with his wife and five children. "Everything is paralyzed."

Nearly 250 civilians have died in shelling, rocket fire and airstrikes on both sides of the city since April 22, the Syrian Observatory for Human Rights said.

The violence in Aleppo has severely tested the Feb. 27 truce between the regime and rebels intended to pave the way to an end to the five-year conflict. The few people out on the streets anxiously watched the sky for regime aircraft, running for shelter when one launched a new raid.

A pro-government newspaper said Thursday the Syrian army was preparing an offensive to recapture all of Aleppo and the surrounding province. Hospitals have also been bombed in nine days of escalating violence in Aleppo. Four medical facilities were hit Friday on both sides of the front line, the ICRC said.

A raid on Wednesday hit a hospital supported by Doctors Without Borders and the ICRC as well as nearby housing, killing 30 people and sparking an international outcry. On other fronts, fighting halted on Saturday in a "freeze" set to last for 24 hours in Damascus and Eastern Ghouta in addition to 72 hours in Latakia.

Anas al-Abdeh, head of the Istanbul-based opposition National Coalition, Saturday accused the regime of "war crimes and crimes against humanity" in Aleppo. Human Rights Watch also said the airstrikes on medical facilities in the city "may amount to war crimes."

Qatar has called for an emergency Arab League meeting and Saudi Arabia condemned the regime strikes.

The overall level of violence in Syria was significantly reduced in the days following the declaration of a partial nationwide truce in February. But the latest round of Syrian peace talks, which ended in Geneva last week having made little progress, were marred by the drastic escalation of fighting in Aleppo and elsewhere. Fresh talks on ending Syria's five-year war are due to resume in May.

Russia will not ask Damascus to stop Aleppo raids

Russia will not ask the Syrian regime to halt air raids on the war-ravaged city of Aleppo, as it believes they are helping to combat extremist groups, Moscow's foreign ministry said Saturday.

"No, we are not going to put pressure on [Damascus] because one must understand that the situation in Aleppo is part of this fight against the terrorist threat," Russian Deputy Foreign Minister Gennady Gatilov told the Interfax news agency. Aleppo, capital of the northern province of the same name, is a key battleground and of vital strategic significance to both sides in the Syrian civil war.

The past week has seen a spike in fighting that has left more than 200 dead, according to the Syrian Observatory for Human Rights.

U.S. officials have accused Moscow of backing the attacks by a Damascus regime, which Russia supports as the Syrian government gears up for an expected assault on Aleppo.

On Thursday, Washington appealed to Moscow to keep Assad's regime in check and the United States also expressed outrage over a deadly air strike on an Aleppo hospital. Secretary of State John Kerry said the strike matched a pattern of Syrian government attacks targeting health workers.