US demands Assad regime to halt airstrikes in Aleppo 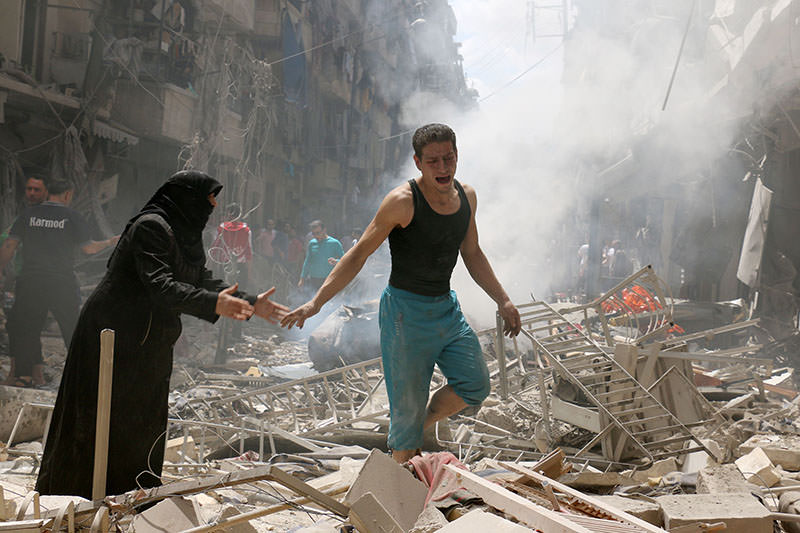 People walk amid the rubble of destroyed buildings following a reported air strike in the northern Syrian city of Aleppo, on April 28, 2016 (AFP)
by Daily Sabah with AFP May 01, 2016 12:00 am

The United States Saturday demanded that Syrian President Bashar al-Assad's forces halt the bombardment of Aleppo and help restore a nationwide cease-fire, with Secretary of State John Kerry due to head to Geneva for talks regarding the conflict.

In calls to the U.N. envoy Staffan De Mistura and the lead Syrian opposition negotiator, Kerry expressed "deep concern" over Aleppo, which has recently seen some of the worst fighting in a conflict that has left more than 270,000 people dead and displaced millions. "The secretary made clear that ending the violence in Aleppo and returning ultimately to a durable, nationwide cessation is a top priority," spokesman John Kirby said.

In the calls, Kerry dismissed claims made by Russia and the Assad regime that the Aleppo strikes were targeting the Al-Nusra Front. "The secretary made clear that we urged Russia to take steps to stop regime violations, especially its indiscriminate aerial attacks on Aleppo," Kirby said.

Meanwhile, thousands of users have called on people to deactivate their social media accounts or to turn their profile pictures red to draw attention to the Syrian regime's air offensive in Aleppo, Al Jazeera reported.

With many in the city left for dead or forced to flee, social media users are using the hashtags #MakeFacebookRed and #AleppoIsBurning to highlight the current offensive. Many users lashed out at Facebook for not initiating a Safety Check for Aleppo which it used after the attacks in Paris and Brussels which allowed users to inform their relatives and friends that they were safe. Some protested Facebook and reacted to the situation by deactivating their Facebook accounts.