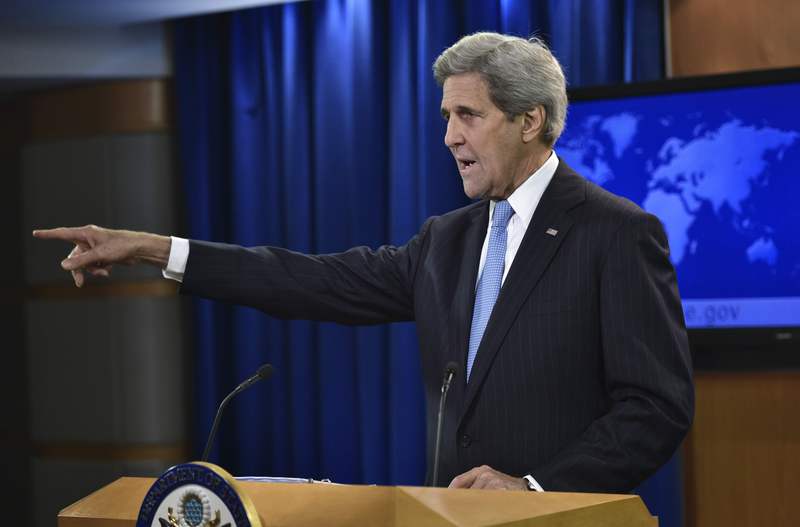 Secretary of State John Kerry warned Syria's Bashar Assad regime and its backers in Moscow and Tehran on Tuesday that they face an August deadline for starting a political transition to move Assad out, or they risk the consequences of a new U.S. approach toward ending the 5-year-old civil war.

But given the various, unfulfilled U.S. threats throughout the Arab country's conflict — from declaring Assad's days "numbered" five years ago to promising military action if chemical weapons were used — it was unclear what effect Kerry's ultimatum might have.

And it's unlikely that the Obama administration, so long opposed to an active American combat role in Syria, would significantly boost its presence beyond the 300 special forces it has authorized thus far in the heart of a U.S. presidential election season.

"The target date for the transition is 1st of August," Kerry told reporters at the State Department. "So we're now coming up to May. So either something happens in these next few months, or they are asking for a very different track."

The top American diplomat spoke following a meeting between the U.N. envoy for Syria and Russia's foreign minister in Moscow on Tuesday, a day after discussions with Kerry in Geneva. The goal was to restore a partial truce that has all but unraveled amid 12 straight days of bitter fighting in Aleppo, Syria's largest city.

Kerry condemned a hospital attack in the city that killed at least 20 people on Tuesday and said the missile appeared to have been fired from rebel-controlled territory. He said the U.S. rejects violence against civilians, whether it's by Assad's regime or Western-backed opposition groups.

But Kerry saved his sharpest comments for Assad and his regime's two key military, economic and diplomatic lifelines: Russia and Iran.

"If Assad does not adhere to this, there will clearly be repercussions," Kerry warned. "One of them may be the total destruction of the cease-fire and then go back to war. I don't think Russia wants that. I don't think Assad is going to benefit from that. There may be even other repercussions being discussed. That is for the future."

Kerry said the U.S. and Russia were working on the details of a more durable cease-fire that would include Aleppo and prevent the metropolis from falling. He said leaders on all sides must refrain from fighting for the cause of peace.

On its face, the threat of continued fighting doesn't seem to carry much weight. Assad has aggressively sought to crush any and all opposition groups in a war that emerged from the regimes's violent repression of largely peaceful, Arab Spring-inspired protests in 2011. Despite a death toll that numbers in the hundreds of thousands, Russian planes and Iranian troops continue to fight alongside the Syrian military.

Kerry also appeared to undermine his own selling of a truce by stressing that the opposition would never accommodate Assad's leadership. The current U.N.-endorsed transition plan for Syria says nothing about Assad relinquishing power or being prevented from running for an eventual re-election as president. His family has ruled Syria for four decades.

"If Assad's strategy is to somehow think he's going to just carve out Aleppo and carve out a section of the country, I got news for you and for him: This war doesn't end," Kerry said.

"As long as Assad is there, the opposition is not going to stop fighting," he said.

Kerry said he has told his counterparts in Moscow and Tehran that calm won't prevail in Syria if they're not prepared to move quickly toward a new Syrian regime.

"Assad cannot reunite the country — it's that simple," Kerry said.

"Having gassed his people, barrel bombed his people, dropped bombs on hospitals, driven 12 million people out of their homes, tortured people, starved people, what kind of legitimacy should somebody who's committed these kinds of atrocities suddenly claim to run the country? It's pretty hard for anybody to understand how you make peace out of that record of chaos and depravity."