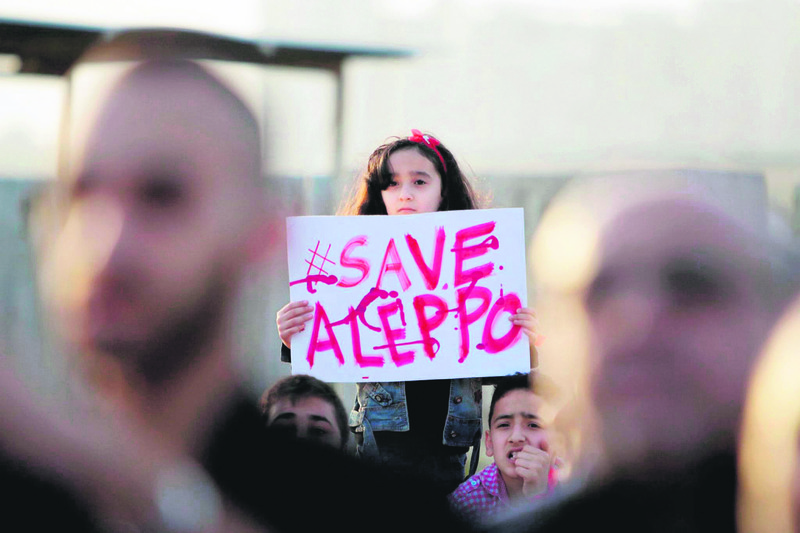 A Syrian girl holds a placard during a rally in solidarity with Aleppo in Tripoli, Lebanon.
by Daily Sabah with Wires May 03, 2016 12:00 am

The Syrian regime has continued to launch aerial attacks on opposition-held parts of Aleppo, killing dozens of civilians despite the U.N.-brokered truce and international outrage over renewed violence

Fresh airstrikes hit Syria's Aleppo city early Monday, an Agence France-Presse (AFP) correspondent said, after U.S. Secretary of State John Kerry arrived in Geneva in a bid to halt the mounting carnage. More than a week of fighting in and around Syria's second-largest city has killed hundreds of civilians. Heavy airstrikes hit rebel-held east Aleppo in the early hours of Monday, the AFP correspondent there said, but there were no immediate reports of casualties. Several neighborhoods, including the heavily populated Bustan al-Qasr district, were struck. It was not clear if Syrian or Russian jets carried out Monday's raids on the opposition-held area. Growing violence in and around Aleppo has killed more than 250 civilians.

The attacks threatened both a U.N.-backed peace process and a fragile ceasefire. Protests were organized in several countries to condemn the attacks.

Kerry has opened a second day of talks in Geneva aimed at finding a way to restore at least a partial truce in Syria amid continuing attacks in Aleppo. Kerry met on Monday with Saudi Foreign Minister Adel al-Jubeir and planned to meet later with the U.N. envoy for Syria, Staffan de Mistura. Kerry said progress was being made toward an understanding on how to reduce the violence in Aleppo but that more work was needed. Al-Jubeir called the situation in Aleppo with continued airstrikes an "outrage" and a criminal violation of humanitarian law. He said that Syria's Bashar Assad would be held accountable for the attacks and would be removed from power either through a political process or by force. "There is only one side that is flying airplanes, and that is Bashar al-Assad and his allies, so they are responsible for the massacre of women, children, and the elderly," he said. "They are responsible for the murder of doctors and medical personnel, and this situation, any way you slice it, will not stand. The world is not going to allow them to get away with this."

For Aleppo, the U.S. is considering drawing up with the Russians a detailed map that would lay out "safe zones." Civilians and members of moderate opposition groups covered by the truce could find shelter from persistent attacks by Assad's military, which claims to be targeting terrorists. One U.S. official said "hard lines" would delineate specific areas and neighborhoods. The officials spoke on condition of anonymity because they were not authorized to discuss the matter publicly. It was not immediately clear whether Russia would accept such a plan or if Moscow could persuade the Assad government to respect the prospective zones. Some U.S. officials are skeptical of the chances for success, but also note that it is worth a try to at least reduce the violence.

The surge in fighting has caused the collapse of a two-month cease-fire brokered by the United States and Russia. It also has raised fears of an all-out government assault on Aleppo. Even though a truce in other parts of the country appeared to be holding on its first day, activists and experts say a new refugee influx may also be expected with the violence simmering once again in Aleppo. An activist in Aleppo told Deutsche Presse-Agentur (DPA) that the regime planes focus their raids on areas where civilians live. "They want to kill as many civilians as they can to raise fear and force the survivors to flee the area," he said. In February, almost 110,000 refugees headed toward the Turkish-Syrian border following offensives by the regime forces of Syria's Bashar Assad against western Aleppo, which has continued for the last week with the support of Russian airstrikes. Aleppo was once again the target of the regime last summer, and thousands of refugees fled toward the border following the regime's violence.

The Arab uprisings, which euphorically swept across the Middle East and North Africa several years ago, appealed to Syrians who had lived under the dictatorship of the Assad family since 1970, when Bashar's father Hafiz Assad seized power. Since then, the majority Sunnis were forced to live in a police state that tried to control every movement, organization and business through the use of a wide-ranging intelligence service. In March 2011, Syrians were emboldened enough to raise their voices against the dictatorship. However, the regime's response was not as peaceful as the protests, and the country was subsequently dragged into a deadly civil war after opposition groups took up arms against the government. The Syrian civil war has now entered its fifth year and has caused the death of more than 200,000 people and at least 60,000 are missing. The war has also displaced nearly 10 million people. While the international and regional powers continue endless discussions, the regime does not just use conventional weapons, but also chemical weapons. About 13.6 million people, equivalent to the population of London, have been displaced by conflicts in Syria and Iraq, many without food or shelter, the U.N. refugee agency revealed. The 13.6 million include 7.2 million displaced within Syria – an increase from a long-held U.N. estimate of 6.5 million, as well as 3.3 million Syrian refugees abroad, 1.9 million displaced in Iraq and 190,000 who have left to seek safety. The vast majority of Syrian refugees have gone to Lebanon, Jordan, Iraq and Turkey. Western countries have been frequently criticized by aid agencies and the U.N. for not opening their borders to the Syrian refugees as the most developed countries have received the least number of refugees.
Last Update: May 03, 2016 9:42 am
RELATED TOPICS