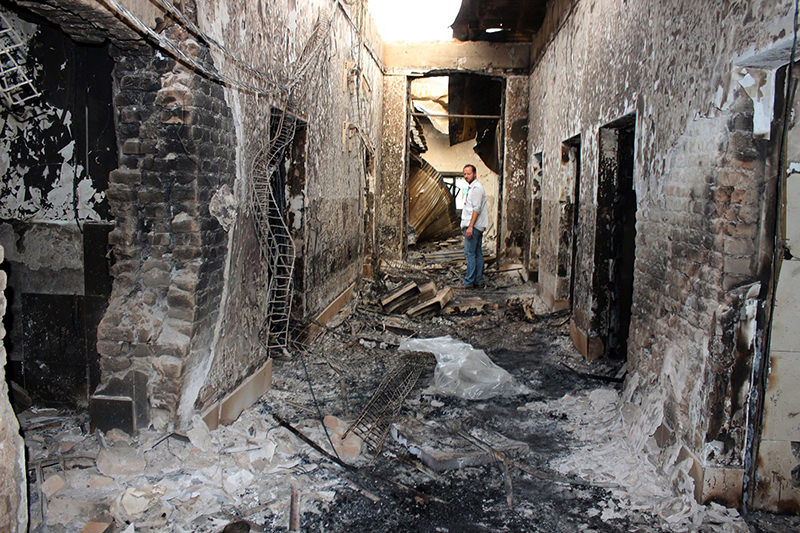 In this Oct. 16, 2015, file photo, an employee of Doctors Without Borders stands inside the charred remains of their hospital after it was hit by a U.S. airstrike. (AP Photo)
by Daily Sabah with Agencies May 03, 2016 12:00 am

The U.N. Security Council Tuesday demanded that all warring parties protect hospitals and clinics, in a resolution that draws attention to the worrying rise in attacks on medical workers in war zones worldwide.

Less than a week after airstrikes on a hospital in the Syrian battleground city of Aleppo killed at least 30 people, the council unanimously adopted the measure that strongly condemned the targeting of health facilities and recalled that such attacks are war crimes.

Six days of air strikes and shelling in Aleppo, which is split between regime and the opposition, killed 200 people, two-thirds of them on the opposition side, the Syrian Observatory for Human Rights said on April 28.

Russian and Assad regime forces have been targeting hospitals as a strategy of war in Syria's conflict, according to a report released by a rights group back in March.

Amnesty International had said it has "compelling evidence" of at least six deliberate attacks on medical facilities in the Aleppo governorate over the past twelve weeks, which killed at least three civilians, including a medical worker, and injured 44 more. It said the attacks amounted to war crimes.

Aleppo has witnessed some of the country's fiercest fighting in the buildup to the partial cease-fire as Assad forces backed by Russian airstrikes try cut off supply routes from Turkey.

Amnesty said the attacks on medical facilities aimed to pave the way for pro-Assad ground forces to advance on northern Aleppo.

On December 25, several missiles struck Baghdad Hospital in Hreitan, a town north of Aleppo City, killing a medical worker, and injuring 10 staff and 20 patients, a doctor and another medical worker told Amnesty International. It left the hospital in ruins.

Some of the last families remaining in Hreitan fled as pro-Assad forces advanced on the town in early February. "I have lived in Hreitan all my life, and I have never seen it deserted," said a father to Amnesty International. "The airstrikes destroyed the city's infrastructure including hospitals so there are no more services for us to be able to survive."

The monitoring group Physicians for Human Rights has documented 346 attacks against medical facilities in the course of the five-year conflict, killing 705 medical staff.

It said 315 of the attacks were conducted by Assad or Russian forces. A report by the group last year said the Assad regime "systematically violated" the principle of medical neutrality by targeting medical facilities and doctors, detaining patients, and arresting, torturing, and executing doctors.

Previously Doctors Without Borders (MSF) representative Aitor Zabalgogeazkoa said on Feb. 16 that there have been about 400 attacks on hospitals that killed some 700 health care workers during the crisis in Syria.

He said that there are 163 MSF-supported hospitals and three MSF health centers in Syria.